Add an Event
Newswire
Calendar
Features
Home
Donate
From the Open-Publishing Calendar
From the Open-Publishing Newswire
Indybay Feature
Publish to Newswire
Add an Event
Related Categories: East Bay | Government & Elections
Libby Schaaf Violated Ethics Laws by Campaigning on Nextdoor
by Dave Id
Monday Nov 5th, 2018 6:31 PM
On November 4, two days before election day, Libby Schaaf abused the power of her office and violated Nextdoor policies for Public Agency accounts when she or a subordinate used the official Oakland "Office of the Mayor" account on Nextdoor to electioneer by posting political endorsements in her favor. Such use of the account rather clearly violated California government ethics law as well.


Nextdoor is a website/app that promotes itself as a "private social network for your neighborhood." Individual users are restricted to making connections only within their immediate vicinity. However, Nextdoor also offers specialized accounts for public agencies, allowing them to communicate official business to an entire city or geographical region. Oakland Public Agencies currently on Nextdoor include the East Bay Municipal Utility District (EBMUD), the City of Oakland, the Office of the Mayor, the Oakland Police Department, and the East Bay Regional Park District.

Schaaf's use of the Agency account violated Nextdoor policies against politicking. Next Door explicitly states, "Agency accounts are not intended for use to advocate for or against a particular candidate, officeholder, political party, or ballot measure (i.e., campaigning or politicking)."

It's possible that Schaaf, or someone acting on her behalf, presumed she was speaking exclusively to her own people by campaigning on Nextdoor, that others wouldn't notice. The website is a notorious hub for racial profiling. White Oakland residents increasingly used Nextdoor to report "suspicious activity" about their Black neighbors. While those who run the site have repeatedly claimed they are committed to weeding out racism on its platform, there is no quick fix.

After complaints began to spread on social media over Schaaf's misuse of the Agency account, the endorsements were removed.

Nevertheless, use of such a platform to which opposing political candidates have no such access violates California ethics laws regarding "public resources" (h/t @jpmassar).

"Use of public resources for private or political purposes."
Cal. Gov. Code §8314

"It is also deemed unfair if incumbents have access to free means of communicating with voters, not available to other candidates."
Cal. Gov. Code §89001

Note that by California law, "public resources" include such things as: public funds, staff time; public equipment; and supplies. It's not clear who has access to the Oakland "Office of the Mayor" account. Was it a city employee who spammed the endorsements on Nextdoor early yesterday morning? Was it campaign staff? Schaaf herself? Are there other similar violations that have gone unnoticed?

The Oakland Public Ethics Commission may end up having something to say regarding legal and/or ethical violations as well.

While posting favorable political endorsements on an Agency account on Nextdoor is not the biggest scandal of all time, it was clearly unethical, and looks to be illegal. It was an abuse of power intended to benefit her re-election campaign. Schaaf knows as much, or the offending posts would not have been removed. So why did they go up in the first place? What does it say about the moral compass of Oakland's incumbent mayor and those she surrounds herself with?
§Detail of one endorsement posted to the Oakland Mayor's public agency account
by Dave Id Monday Nov 5th, 2018 6:31 PM 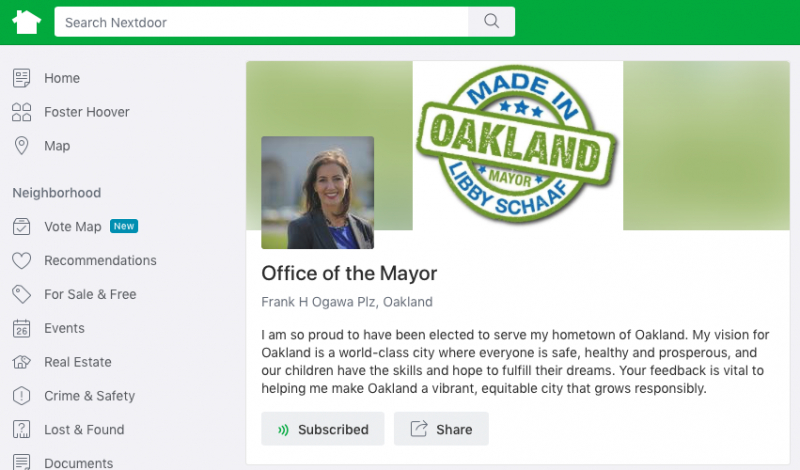 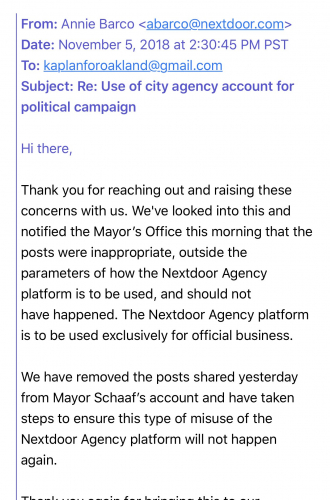 "We have removed the posts shared yesterday from Mayor Schaaf's account and have taken steps to endure this type of misuse of the Nextdoor Agency platform will not happen again."

[Screenshot by @Kaplan4Oakland.]
Add Your Comments
Support Independent Media
We are 100% volunteer and depend on your participation to sustain our efforts!