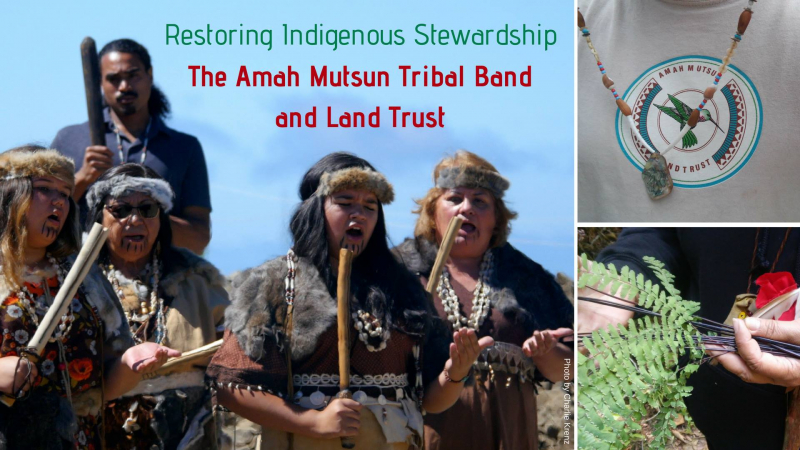 About the lecture:
California Indians have managed and sustained cultural ecosystems with traditional resource and environmental management practices for centuries. Today, after a period of colonial dispossession, the Amah Mutsun Tribal Band is fulfilling their obligation to their Creator by relearning traditional ecological knowledge (TEK) and returning to their traditional territory, which includes Santa Cruz and surrounding areas, to steward and care for Mother Earth. Amah Mutsun Tribal Chairman Valentin Lopez will discuss the history of the tribe and how the Amah Mutsun Land Trust (AMLT) was developed as a means to assist the tribe in their efforts to gain access to lands within their tribal territory. Sara French, a research associate with AMLT, will give examples of how the AMLT is restoring indigenous stewardship to Amah Mutsun ancestral lands using research and education, conservation and restoration, and innovative partnerships in the Santa Cruz mountains and beyond.

The 2018 Amah Mutsun: Then and Now program series is supported by California Humanities, a non-profit partner of the National Endowment for the Humanities. Visit http://www.calhum.org.

About the speakers:
(1) Valentin Lopez is the Chairman of the Amah Mutsun Tribal Band and the President of the Amah Mutsun Land Trust Board of Directors. Chairman Lopez works tirelessly to honor his ancestors and make sure they are never erased from history or forgotten. He has spoken on numerous occasions on the floor of the United Nations to bring international attention to the cultural and ecological restoration initiatives of his tribe. He serves as a Native American Advisor to the University of California, to the National Alliance on Mental Illness, and the Phoebe Hearst Museum of Anthropology. Chairman Lopez is a Mutsun singer and dancer and student of the Mutsun language.

(2) Sara French is the Director of Programs and Development for the Amah Mutsun Land Trust. She holds dual degrees from UC Santa Cruz in Environmental Studies and Anthropology, and a master’s degree from UC Berkeley in Range Management. She has worked with the Amah Mutsun Tribal Band since 2009 on numerous ethnobotanical, ecological restoration, and resource management projects. In recent years she has focused her efforts on fundraising, grant writing, and developing resource stewardship programs for the Amah Mutsun Land Trust. She is a native plant enthusiast and is deeply committed to restoring indigenous stewardship and culturally significant native plants to Amah Mutsun traditional territory.
END_OF_DOCUMENT_TOKEN_TO_BE_REPLACED
Added to the calendar on Sun, Nov 4, 2018 8:52PM
Add Your Comments
Support Independent Media
We are 100% volunteer and depend on your participation to sustain our efforts!