Add an Event
Newswire
Calendar
Features
Home
Donate
From the Open-Publishing Calendar
From the Open-Publishing Newswire
Indybay Feature
Publish to Newswire
Add an Event
Related Categories: Santa Cruz Indymedia | Government & Elections | Racial Justice
City Council candidates walk out of UCSC forum when questioned about white supremacy
by Black Lives Matter Ally
Friday Nov 2nd, 2018 8:30 PM
On October 29 at a city council candidates forum at UC Santa Cruz, all of the white candidates running except for Phil Crawford and Cynthia Hawthorne walked out after being called out by the audience for responding with pro-police and "All Lives Matter" statements to a question about what they would do to combat white supremacy, according to an account published by a student on social media. (Video: Candidate Drew Glover speaks about the prevalence of white supremacy in Santa Cruz, followed by Ashley Scontriano's statement at 1:15 minutes in.)
Copy the code below to embed this movie into a web page:
Download Video (15.9MB) | Embed Video
From a student posting in the Official Group of UCSC Students:

"To make it even better, when candidate Ashley Scontriano responded she said: "I'm not going to pretend like I know what [white supremacy] is but as a woman and I know what it feels like to be told what to do by men and it doesn't feel very good". She, along with Donna Meyers and Greg Larson all left after the crowd responded with yells of discontent towards their evasion of the actual questions and support of police."

"Those who were vocal about being against white supremacy include Justin Cummings, Drew Glover, and Phil Crawford. Cynthia Hawthorne did not vocally denounce white supremacy but she supported students right to speak up when they feel something is not right and therefore chose to stay, despite calls from the audience about her and others ambivalence to white supremacy."
§Drew Glover's response
by Black Lives Matter Ally Friday Nov 2nd, 2018 9:36 PM
Drew Glover posted this on Facebook in response to the walk-out:

"TFW when you are a black City Council candidate and attend a forum where the moderator asks the panel "What do you plan to do about white supremacy in Santa Cruz?", you respond with acknowledging the fact that white supremacy exists locally and to address that issue we need diverse representation in elected positions, pointing out that you would be the first black man in the history of the city to be elected onto the City Council, and then the conservative base of one of your opponents go after you for "race-baiting".

"This is of course while they are actively claiming that white supremacy is NOT an issue locally and asserting that YOU are "causing a race-baiting mess with the other candidates" by addressing it.

"I personally find it pretty interesting that I am the problem for pointing out the issues and the issue is NOT the white supremacy....These are people in our community. They vote. We have some work to do Santa Cruz. We can do it together.

People have been disappointed with Ashley Scontriano and have confronted her for her lack of willingness to address the issue of white supremacy. In response to critiques of the 'All Lives Matter' phrase, Scontriano states creepily: "All lives don't matter?"
§Ashley Scontriano
by Archivist Tuesday Mar 26th, 2019 10:35 PM 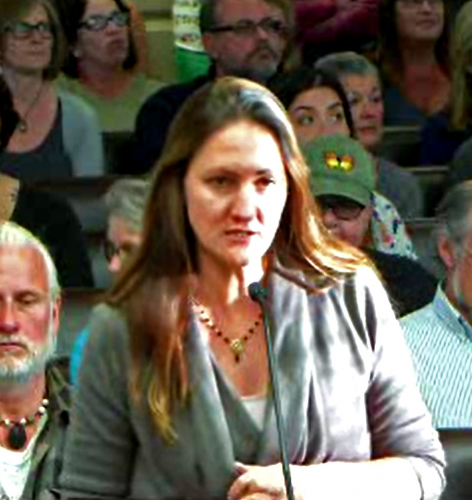 original image (905x958)
Ashley Scontriano speaks before the Santa Cruz City Council in 2018.
Add Your Comments
LATEST COMMENTS ABOUT THIS ARTICLE
Listed below are the latest comments about this post.
These comments are submitted anonymously by website visitors.