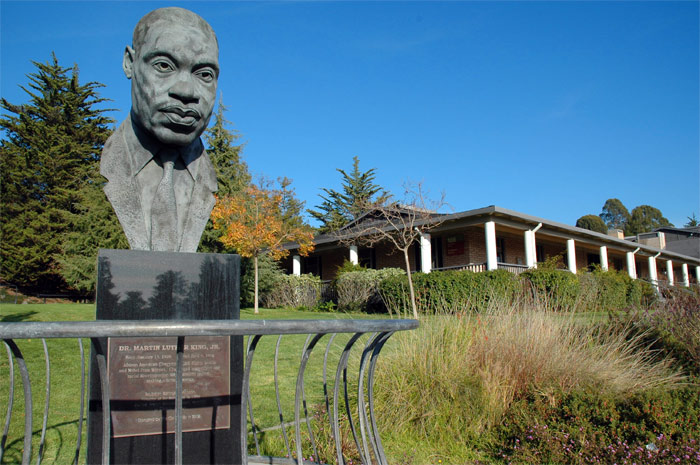 The Martin Luther King Jr. statue was created by and installed in 2003 by Barrington McLean, the first African American teacher at Cabrillo. He taught from 1969 to 1979.

Cabrillo College issued the following statement about the flyers:

"The campus needs to know that a number of 8.5 x 11 sheets of paper were removed from the base of the Martin Luther King statue this morning, each of them containing a handwritten message saying "it's okay to be white." Some quick thinking by our staff resulted in our ability to tamp down this act of micro-aggression against our students and community. But it represents another disturbing example of the divisive climate that our culture faces right now. Once again, in response to this, our students need to hear from us that hate cannot conquer love and mutual respect." 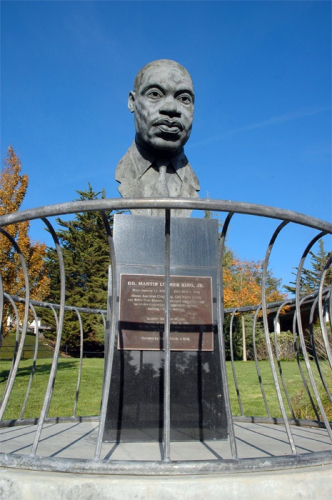 "It's okay to be white or It's OK to be white (IOTBW) is a slogan based on a poster campaign organised on the American imageboard 4chan in 2017, as a "proof of concept" that a "harmless message" would cause a "massive media shitstorm", so that the media backlash against the slogan would help convert white Americans to the far-right. Posters and stickers containing the sentence "It's okay to be white" have been placed in streets in the United States as well as on campuses in the United States, Canada, New Zealand, Australia and the United Kingdom. The slogan has been spread by neo-Nazis, and racist groups including white supremacists."

‘It’s okay to be white’ signs and stickers appear on campuses and streets across the country
https://www.washingtonpost.com/news/post-nation/wp/2017/11/03/its-okay-to-be-white-signs-and-stickers-appear-on-campuses-and-streets-across-the-country/
Add Your Comments
Support Independent Media