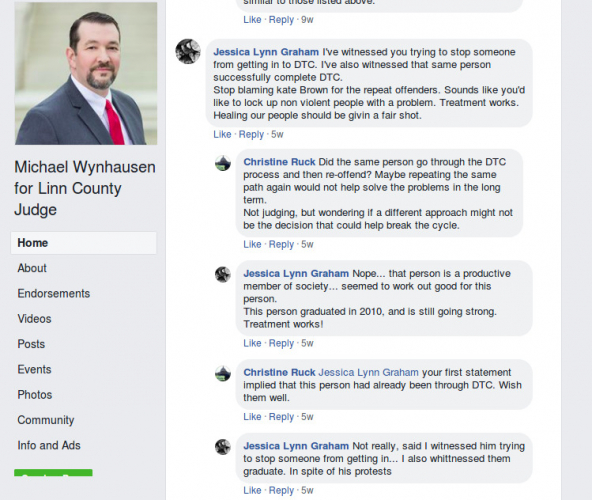 We all like to rag on willyweek, but their right up about how scared redneck white men are trying to seize the courts is dead on.
https://www.wweek.com/news/courts/2018/03/21/upstart-candidates-are-looking-to-alter-the-oregon-courts-shaped-by-gov-kate-brown/
Linn County and Salem seem to be the center of this Trump/Pence Pushback....

"It might make some sense for Republicans to get together and run for judicial positions, since we may never have a Republican governor again," says Jack Roberts, a former state labor commissioner who once ran for the Oregon Supreme Court.

Kristian Roggendorf, a Lake Oswego lawyer active in the Federalist Society, a conservative legal group, says he's unaware of any such organized action.
But the timing for a backlash is ripe."

The idea that a ton of fresh faced Rethuglican candidates invaded the poles isn't planned is some ballsy baloney. It's really obvious in at least the case of right wing nut job Michael Wynhausen's candidacy, he's pandering to people who hate liberals, hate Kate Brown, hate Blacks, hate immigrates, and hate the gheys but are careful not to be obvious about it.

One of Wynhausen's supporters is Lars Larson. Old readers might remember Larson's uncritical endorsment of the war in iraq:

Anyway, Larson this Wynhausen is the greatest. You can listen to the interview here:

There's more at this blog:

Wynhausen is endorsed by Tim Meuller who thinks as a Sheriff, he can blow off the feds:

If the follow the blog links, one gets Wynhausen is tough on drugs, doesn't believe marijuana should be legalized, and actively tries to keep offenders out of treatment programs:

“I've witnessed you trying to stop someone from getting in to DTC(drug treatment court). I've also witnessed that same person successfully complete DTC.
Stop blaming kate Brown for the repeat offenders. Sounds like you'd like to lock up non violent people with a problem. Treatment works. Healing our people should be givin a fair shot.”

Here's a woman he hounded for over a year, even after doctors confirmed she was the victim of a rare medical reaction after taking Ambien:

Where did they dig up this heartless jerk?

Whatever you think we need to VOTE to keep right wing nut job douches off the bench.

original image (1143x498)
https://linncountyloons.blogspot.com/
Add Your Comments
§Judicial Code of Conduct violation?
by Rob
Wednesday Oct 24th, 2018 7:07 PM
Looks like this clown might have violated codes of conduct in his smear campaign according to his opponents page;

The Democrat-Herald just posted a news story about Judge Fay’s race. We appreciate the coverage and how the story shares the broad range of experience that she brings to the bench.

Also in the story, however, Judge Fay’s opponent continues his attacks, this time with a new out and out lie about the timing of her application for the appointment. This lie is a clear violation of Oregon’s Judicial Code of Conduct, which applies to candidates running for judge. The Code of Conduct says:

With his lie that Judge Fay was allowed to apply for the appointment to the bench after the deadline, Mr. Wynhausen has clearly violated the Judicial Code of Conduct. He does not have the temperament or the integrity to serve the people of Linn County as a Circuit Court Judge."


If true, not surprising. All the Trumpistan Republicans are using every dirty trick in the book to win.

So this guy really got a degree in theater at Santa Clara? LOL


Add a Comment
§Bullying people for recovering from addiction?
by WTF
Thursday Oct 25th, 2018 10:46 PM
Its getting pretty vicious on Facebook. Some guys sock was outed and in the same thread a Wynhausen fan gurl is bullying someone who successfully completed a drug treatment program and improved their life

"Wyatt King "Jxxxxx" is one of Fay Stetz-Waters most active supporters, and a felon. On a prior post, she said Wynhausen didn't believe in second chances... yet here she is bringing up an ex-wife (key word- ex) to try and say Michael isn't a good candidate.

Maybe one shouldn't throw around bs articles from conspiracy blogs to attack someone through their ex when that person has a long list of criminal offenses publicly available..."

Are we to take it this means anyone with a criminal past (key word- PAST) gives up forever and in perpetuity their right to express their political opinion or risk having their record dredged up?

Add a Comment
§The comments about a Soros Conspiracy have been deleted
by too late
Friday Oct 26th, 2018 8:54 AM 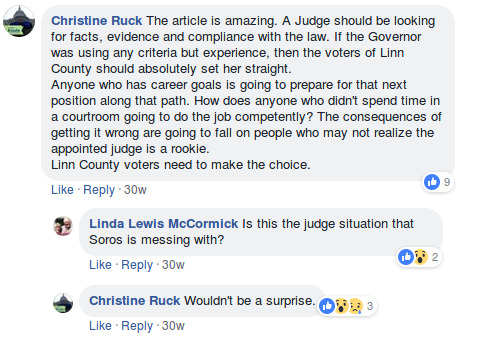 These comments are now only on the Linn Loons archive:

" Christine Ruck
The article is amazing. A Judge should be looking for facts, evidence and compliance with the law. If the Governor was using any criteria but experience, then the voters of Linn County should absolutely set her straight.
Anyone who has career goals is going to prepare for that next position along that path. How does anyone who didn't spend time in a courtroom going to do the job competently? The consequences of getting it wrong are going to fall on people who may not realize the appointed judge is a rookie.
Linn County voters need to make the choice.

Linda Lewis McCormick
Is this the judge situation that Soros is messing with?

Christine Ruck
Wouldn't be a surprise"

And now, on his election page, Wynhausen has some hypocritical garbage about how private views are private:

Passionate citizens make for heated debates, but it's important to focus on what matters: experience, qualifications, and who will best represent the beliefs and values of Linn County.

Private political views of private citizens are just that, private."

Hmkay, then maybe don't talk about your whacked out conspiracies on public Facebook pages? Cuz then they stop being "private".

Wonder if they're freaked out about the attempt to bomb Soros? Too late to not look like the bad guys, Republican fuckers.

Add a Comment
§Wynhausen's hired goon Wyatt
by not so good fellas
Thursday Nov 1st, 2018 12:49 PM
Mickey's hired a goon for PR,which seems to involve stalking anyone on social media who points out Mickey W is a right wing nut job pandering to racists, and nutbars who think 911 is an inside job.


Stay classy.
Add a Comment
Support Independent Media
We are 100% volunteer and depend on your participation to sustain our efforts!