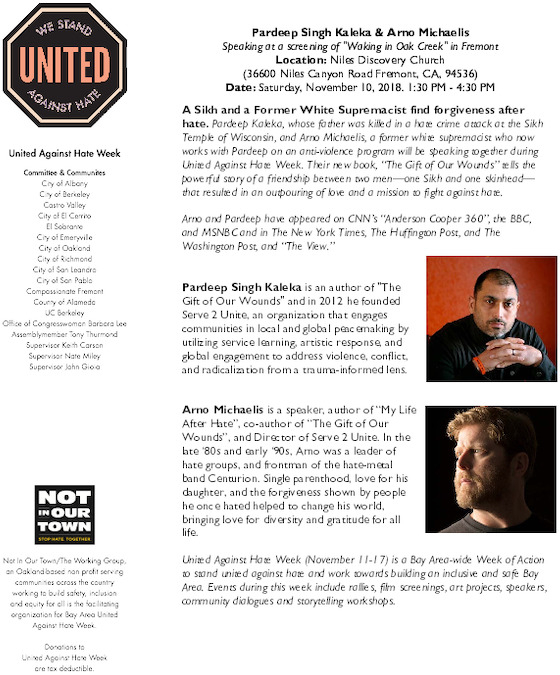 Import event into your personal calendar
Date:
Saturday, November 10, 2018
Time:
1:30 PM - 4:30 PM
Event Type:
Screening
Organizer/Author:
Beth Hoffman
Location Details:
Location: Niles Discovery Church
36600 Niles Canyon Road Fremont, CA, 94536
jeff [at] nilesdiscoverychurch.org
A Sikh and a Former White Supremacist find forgiveness after hate. Pardeep Kaleka, whose father was killed in a hate crime attack at the Sikh Temple of Wisconsin, and Arno Michaelis, a former white supremacist who now works with Pardeep on an anti-violence program will be speaking together during United Against Hate Week. Their new book, “The Gift of Our Wounds” tells the powerful story of a friendship between two men—one Sikh and one skinhead—that resulted in an outpouring of love and a mission to fight against hate.

Arno and Pardeep have appeared on CNN’s “Anderson Cooper 360”, the BBC, and MSNBC and in The New York Times, The Huffington Post, and The Washington Post, and “The View.”

Pardeep Singh Kaleka is an author of "The Gift of Our Wounds" and in 2012 he founded Serve 2 Unite, an organization that engages communities in local and global peacemaking by utilizing service learning, artistic response, and global engagement to address violence, conflict, and radicalization from a trauma-informed lens.

Arno Michaelis is a speaker, author of “My Life After Hate”, co-author of “The Gift of Our Wounds”, and Director of Serve 2 Unite. In the late ‘80s and early ‘90s, Arno was a leader of hate groups, and frontman of the hate-metal band Centurion. Single parenthood, love for his daughter, and the forgiveness shown by people he once hated helped to change his world, bringing love for diversity and gratitude for all life.

United Against Hate Week (November 11-17) is a Bay Area-wide Week of Action to stand united against hate and work towards building an inclusive and safe Bay Area. Events during this week include rallies, film screenings, art projects, speakers, community dialogues and storytelling workshops.
END_OF_DOCUMENT_TOKEN_TO_BE_REPLACED
Added to the calendar on Thu, Oct 18, 2018 11:10AM
Add Your Comments
Support Independent Media
We are 100% volunteer and depend on your participation to sustain our efforts!