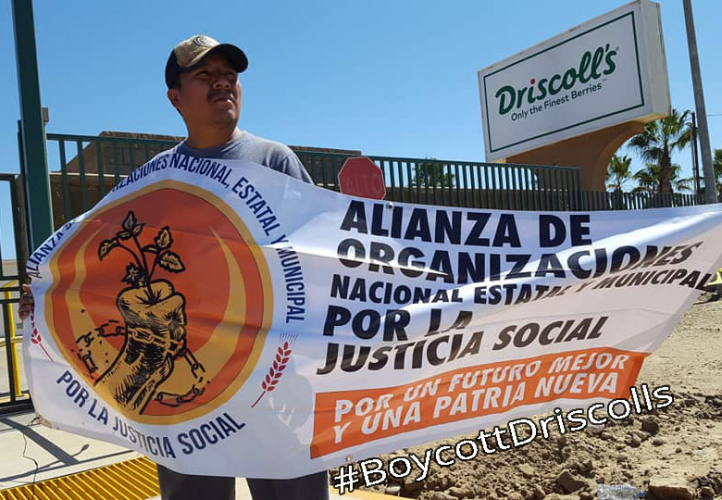 original image (780x540)
[ Photo: A member of the Alliance of National, State and Municipal Organizations for Social Justice holds a banner for the organization outside of a Driscoll's facility in Baja California, Mexico. September 29, 2018. ]


Union leaders and community activists organized a day of action today in support of Mexican farmworkers' fight to obtain a collective bargaining agreement from Driscoll's farms, an international berry distributor. In addition to union suppression, farmworkers are fighting against low wages and unsafe working conditions. KPFA's James Greene has the story.

KPFA: Over 70,000 farmworkers in the San Quintín Valley of Baja California have been waging intermittent strikes and organizing mass mobilizations against Driscoll's.

Since March of 2015, workers have demanded increases in their daily wage, an eight hour work day, health benefits, overtime pay, and vacation days. They're also fighting for the legal recognition of their independent union, the Independent National Union of Agricultural Laborers.

The San Qunitín farmworkers pick strawberries, tomatoes, and other fruit for export into the United States via Driscoll's Mexican subsidiary, BerryMex. The workers earn as little as seven dollars per day, and report that they are subject to sexual assault and abuse, pesticide poisoning, and that Driscoll's utilizes child labor.

Braulio Sanchez is an organizer for Boycott Driscoll's Solidarity.

Sanchez: The workers are saying that Driscoll's and companies which supply them berries, such as BerryMex, Moramex, Santo Domingo, Martín Reyes, etc., besides paying miserable wages, they deny unions free access to their employees. Workers are demanding freedom to unionize, collective contract with their independent union, daycare centers, no more sexual harassment, and fair wages.

KPFA: In a statement to KPFA, a Driscoll's representative said that they "remain disappointed that detractors have declined numerous in-person meetings with Driscoll's and continue to disseminate misinformation and false accusations." They added that "Driscoll's largest grower in Baja currently has union representation and is one of the highest paid growers in Mexico." Sanchez is skeptical and said that a few extra dollars a day does not qualify as a living wage.

KPFA: Saturday, September 29th marked an international day of action against Driscoll's, with rallies in Tijuana, Chicago, New York, and San Francisco. The United Farm Workers of America, the nation's largest farmworkers union, has been silent on the Driscoll's boycott. Through the Equitable Food Initiative, a partnership between workers, growers, and retailers, UFW now partners with several large agribusiness, including warehouse retailer Costco and Whole Foods Market — both major partners of Driscoll's. Sanchez is disappointed with organizations such as the UFW, but is proud that farmworkers have organized their own mass workers' movement.

Sanchez: Unlike a lot of labor disputes we are used to hearing about in the United States, this one isn't organized by a non-profit organization, it's organized by the farmworkers themselves. Farmworkers are putting out this call to boycott Driscoll's. They're explaining their demands, the conditions that they're living in. It's the farmworkers again that are leading this boycott, and they're the ones that are going to see it to victory.

KPFA Evening News is a collaboration of KPFA in Berkeley and KFCF in Fresno.

Comprehensive coverage of the day’s news with a focus on war and peace; social, environmental and economic justice.