by El Enemigo Común (solidarity [at] elenemigocomun.net)
The National Democratic Independent Farm Workers Union (SINDJA) is calling upon all sister organizations to participate in the Global Day of Action against Driscoll's. 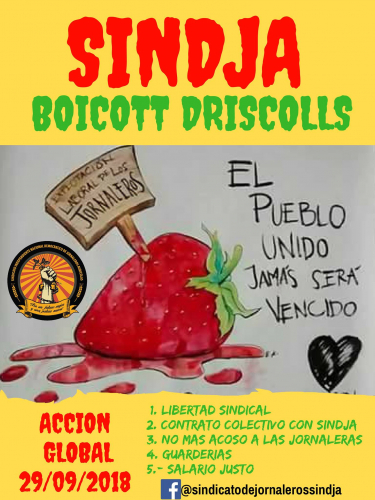 original image (1536x2048)
The National Democratic Independent Farm Workers Union (SINDJA) is calling upon all sister organizations to participate in the International Global Action against the transnational corporation Driscoll's — one of the most exploitive agricultural companies in the San Quintín Valley, Baja California. Workers are demanding: Driscoll's, and the companies which supply them berries, such as BerryMex, Moramex, Santo Domingo, Martín Reyes, Munguia, etc, besides paying miserable wages, they deny unions free access to their employees. In contrary, all their workers that organize or affiliate with another independent union are fired. And also workers are only hired under the condition that they are not affiliated with the Regional Confederation of Mexican Workers (CROM).

For this and many more abuses, we invite everyone to shout with one united voice, on September 29.