by Gypsy Taub
The very first in human history (as far as we know) rally to legalize psychedelic medicine was followed by our 3rd annual Nude Summer of Love Parade. It took place in San Francisco on August 19, 2018. 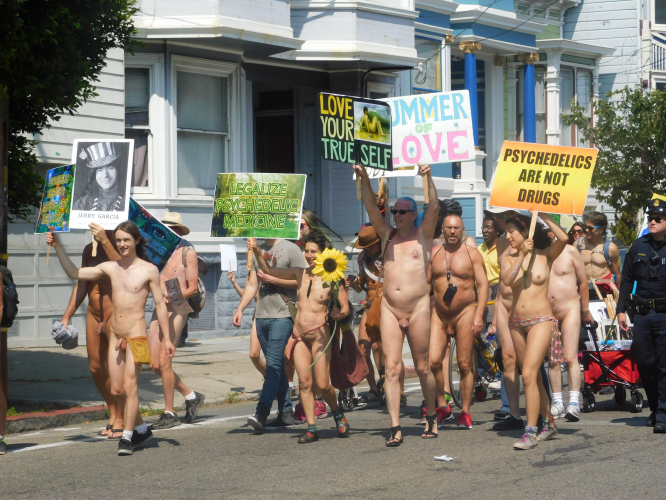 The very first in human history (as far as we know) rally to legalize psychedelic medicine was followed by our 3rd annual Nude Summer of Love Parade. It took place in San Francisco on August 19, 2018. The parade marched from the Castro to the Haight. Gypsy Taub made a speech about her own experience with psychedelic medicine, and about the benefits of psychedelics. The reason they are illegal has to nothing to do with public health nor safety and has everything to do with psychedelics being a threat to the war machine. Next rally and nude love parade are scheduled for Saturday, September 29th @ 11 am in front of City Hall in San Francisco. More info at http://www.MyNakedTruth.TV

The very fist in human history rally to legalize psychedelic medicine took place in San Francisco August 19th and was followed by our 3rd annual Nude Summer of Love Parade. The rally was dedicated to Jerry Garcia.

GYPSY TAUB’S SPEECH AT THE RALLY TO LEGALIZE PSYCHEDELIC MEDICINE AND NUDE SUMMER OF LOVE PARADE:

My name is Gypsy Taub. You can find me on the web at http://www.MyNakedTruth.TV

Thank you so much for coming today to our Nude Summer of Love Parade!

This parade is taking place shortly after the birthday of Jerry Garcia, the leader of the Grateful Dead band and one of the greatest healers of all times.

Today we celebrate the life, the music and the legacy of Jerry Garcia, the Grateful Dead and the Summer of Love.

The 60-s were a very special time in history. Truly a mystery to this day, they were filled with hope, love, freedom, passion, beauty, communion with nature, unity, spiritual yearning and deeper compassion.

They were filled with rebellion, with important lessons and timeless wisdom. They brought sweeping change in all areas of life, especially in the areas of spirituality and personal freedom.

These changes were brought about through music and art, through protest and civil movements, through organizing and sharing. They focused on personal growth and community. They brought us all together in ways that no one could have ever dreamed of in the past.

One of the most powerful and essential healers of the 60-s was the psychedelic medicine. Along with music, psychedelics played the most important role in the unprecedented shift of consciousness, in the birthing of the new spirituality that had never been before.

For those of you who are new to this subject psychedelics are sacred plants or plant based mind-altering medicines that produce no addiction and cause no harm to the body. Some of the most well-known ones are magic mushrooms, LSD, MDMA or ecstasy, DMT, ayahuasca, ibogaine, salvia, peyote, San Pedro and many more.

Thankfully, that never stopped me from taking them.

I wouldn’t be here today if it wasn’t for psychedelics. These sacred medicines didn’t just save my life, they literally saved my soul.

I was raped and tortured as an infant and as a young child. Subsequently my life was filled with fear, pain, shame and confusion. It took me over 20 years of therapy to get my memories. It was psychedelic medicine that allowed me not only to heal myself but to heal many others.

I run a healing clinic and a rehab for street kids in Mexico. It is called Jerry Garcia Family Healing Clinic.

I use psychedelic medicine to treat addiction and depression. I work with about a dozen kids from the age of 8 to the age of 19. Almost all of them were smoking meth and all were sniffing glue when we first met about a year and a half ago.

After combined few months of psychedelic therapy no one smokes meth and almost everyone has quit glue. The few kids that are still using glue have greatly reduced their use. Anxiety has decreased tremendously.

One of my patients Ramon was autistic when we first met. He was terrified of everything and almost never spoke. After a few of our visits to Mexico and a combined few months of psychedelic therapy Ramon’s autism is almost gone. He used to be a scared repressed kid whom no one ever noticed. He is now a beautiful charming young man with a radiant smile.

Like anything powerful psychedelics need to be treated with respect and used in special therapeutic settings with the purpose of healing.

But that doesn’t mean that psychedelics should be illegal.

Many people drive irresponsibly not only causing harm to themselves but to many innocent people as well. Does that mean that driving should be illegal?

Many people drink irresponsibly. Does that mean that alcohol should be illegal? We have already tried it before.

The reality is that many people will still consume what they want to consume. They will just have to get it on the black market. And that increases the dangers tremendously. There were recently a number of deaths due to black market distribution of fake LSD. This would have never happened had LSD been legal. These deaths were not caused by LSD, they were caused by prohibition.

Another problem is that because psychedelics are illegal it is very hard to get any legitimate education on how to take them safely and with maximum benefit for the soul and body.

Once they become legalized there will be clinics and other legal places where experienced guides and doctors will be available to the general public to have safe and therapeutic experiences. Trainings and education will be much easier to provide to those who want to facilitate this kind of healing and all of us will have full access to these powerful medicines that our society needs so desperately.

Psychedelic medicine has been used for eons of time all over the world.
The cultural revolution of the 60-s brought a reemergence of indigenous nature-based spirituality in the Western World where the psychedelic tradition of the past was violently suppressed and ripped away from the people of Europe.

It was exterminated in the most cruel sadistic ways by the child rapists and the mass murderers otherwise known as the Catholic Church.

Natural healers were labeled as witches and burned in front of their own children. Anyone who refused to become a mental slave to their so-called religion was tortured or murdered. Genocide was committed on mass scale.

During the renaissance of psychedelic spirituality in the 60-s the same criminals, the same child raping mass murderers became threatened by its power. This time they were wearing a different hat. However, the government of the United Stated that assasinated Kennedy and mass murdered people in Vietman has always been closely connected with the religious right.

Psychedelics threaten the very fabric of totalitarian tyranny that had always relied on fear and confusion.

Psychedelics wake people up and cultivate compassion and responsibility for one’s actions. They empower and inspire, they help people see the truth.

It is much harder for an illegitimate corrupt government to lead the blind masses to their own doom when the masses are no longer blind. .

Let’s make no mistake, psychedleics are not banned because of their danger to health and society. Psychedelics are banned because they are and have always been a huge threat to the New World Order.

Sacred plants come as allies, as spirit guides to assist us on our spiritual quest, to facilitate communication with higher consciousness. They free us from the constraints and the lies of the ego and allow us to honestly feel our true emotions, good and bad.

They allow our minds to connect with our hearts, they helps us integrate our thoughts and feelings. They help us heal childhood trauma, to gain clarity and vision.

We live in very challenging times. Sometimes it seems like darkness will consume humanity entirely.

And as tempting as it is to blame Trump and Putin for the pain and the turmoil, the deeper truth is that the outside world is but a reflection of our internal mental and emotional state.

We as the human race are standing at the brink of a nightmare or a dream. It is up to us what we will choose to create.

We are all imprisoned by pain, shame and fear. We need healing in order to transform the nightmare into a dream.

We need healing at the core level of our very beings, at the very core of our souls.

Traditional methods are not working. We are running out of time. We need a revolutionary change in our approach to healing.

We need to return to mother nature, we need to let her guide us back to the Garden of Eden. Psychedelics are a gift from higher consciousness that can help us at this very difficult time. They can help us find our way back home. Let’s embrace and celebrate this gift!
END_OF_DOCUMENT_TOKEN_TO_BE_REPLACED
§rally to legalize psychedelic medicine august 2018 video
by Gypsy Taub
Copy the code below to embed this movie into a web page:
Download Video (412.6MB) | Embed Video
END_OF_DOCUMENT_TOKEN_TO_BE_REPLACED
§rally to legalize psychedelics and nude summer of love parade 2018 San Francisco
by Gypsy Taub 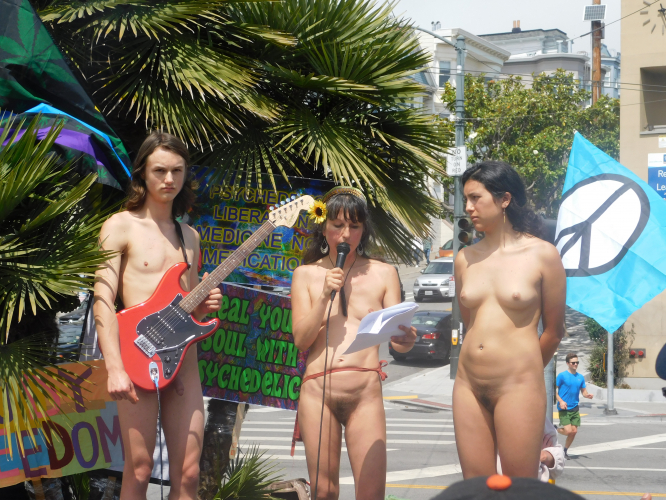 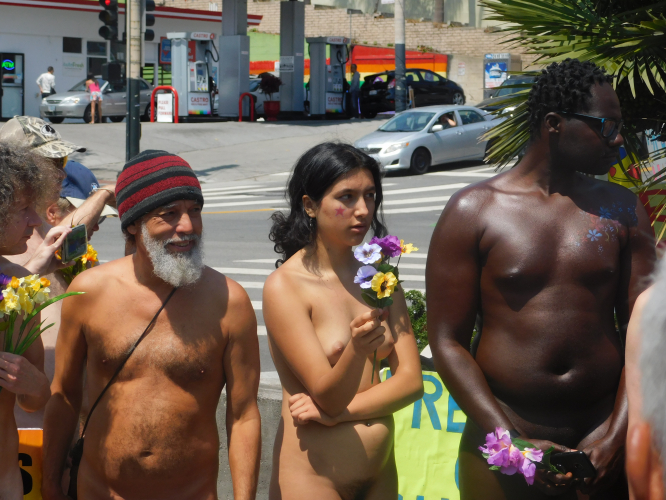 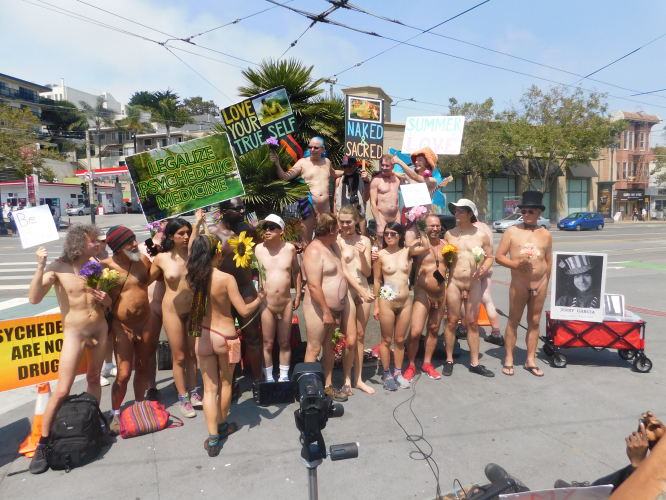 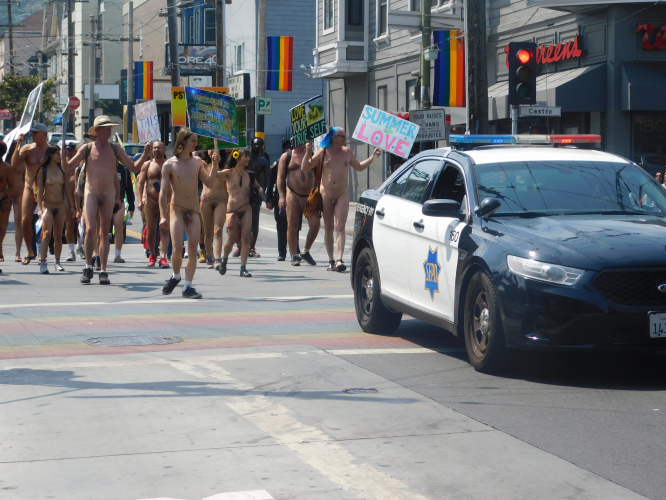 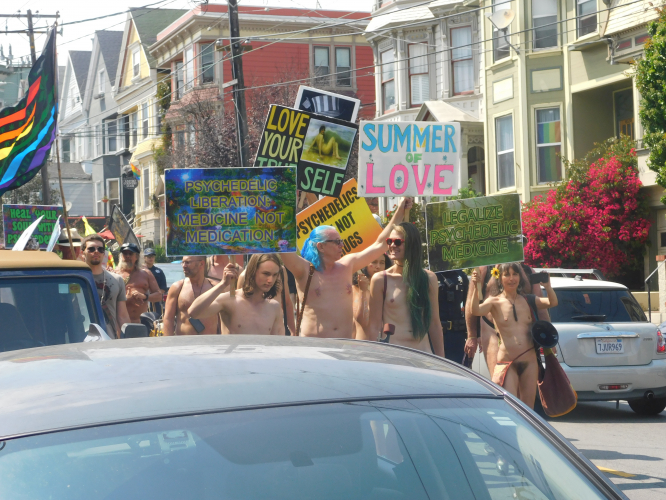 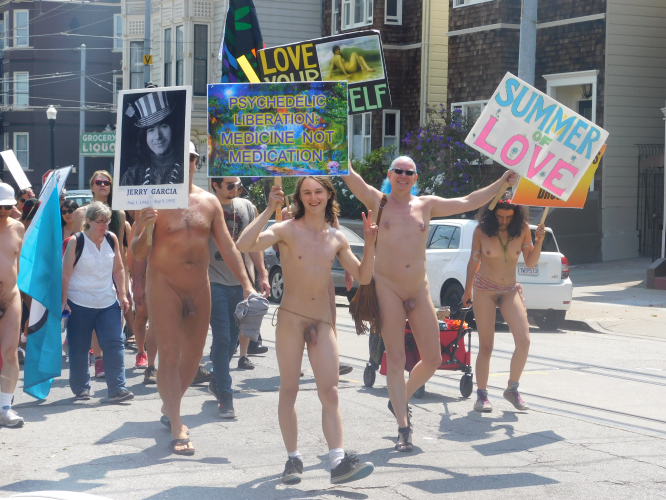 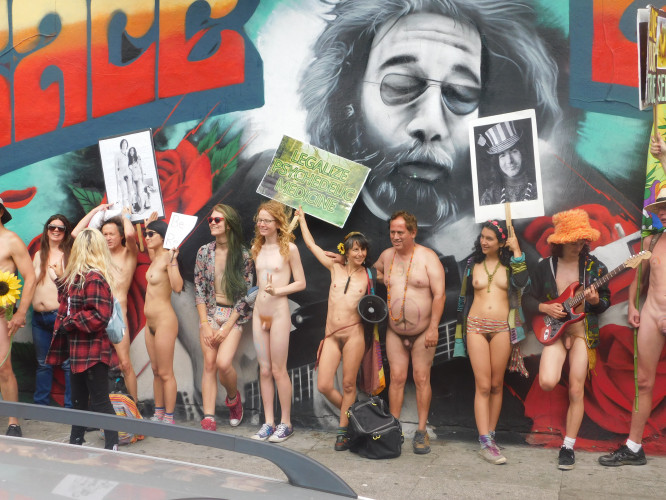 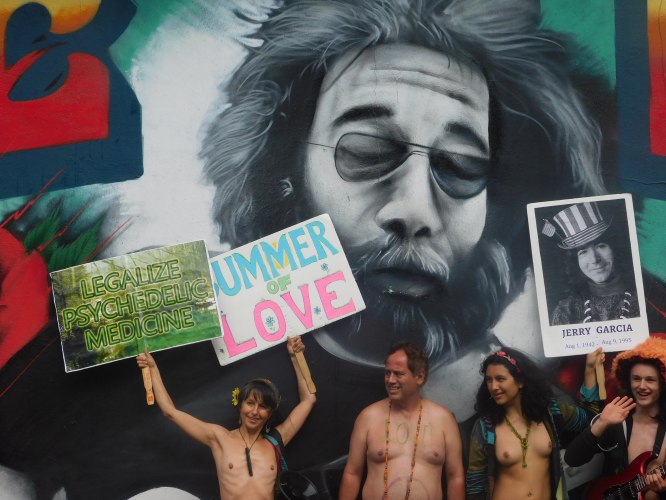 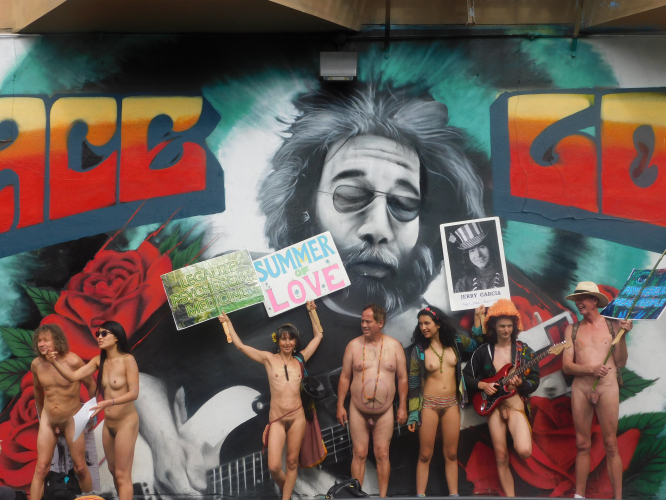 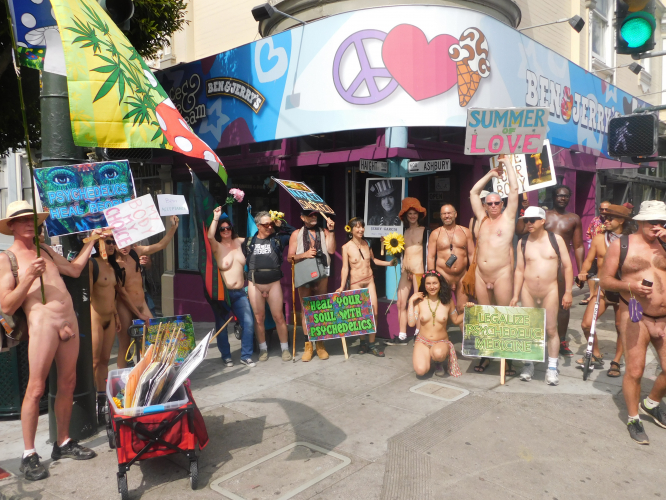 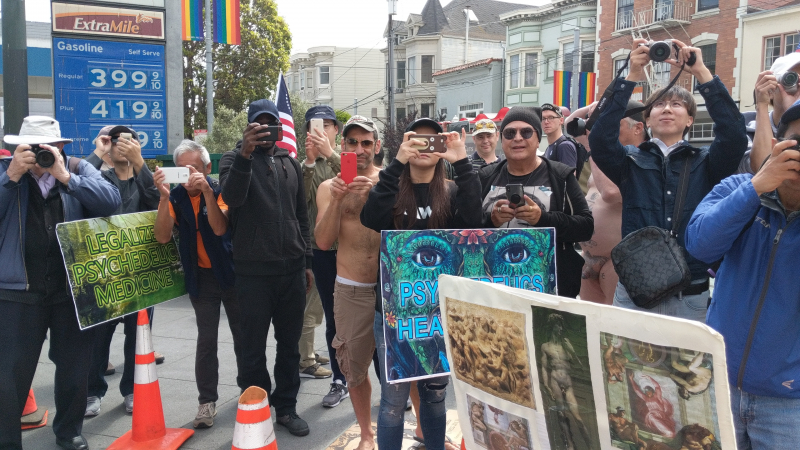 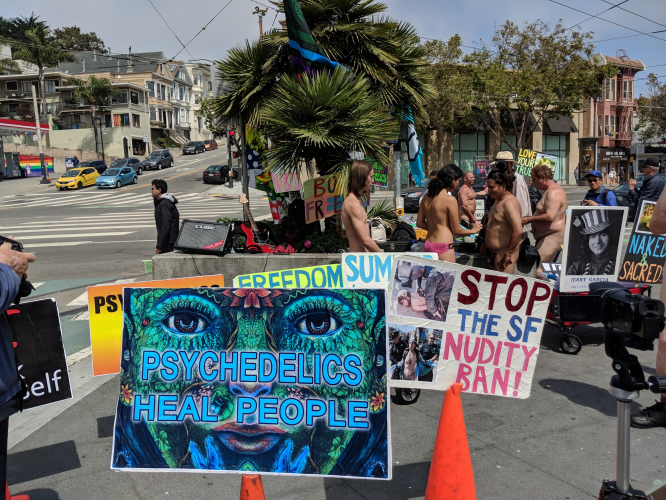 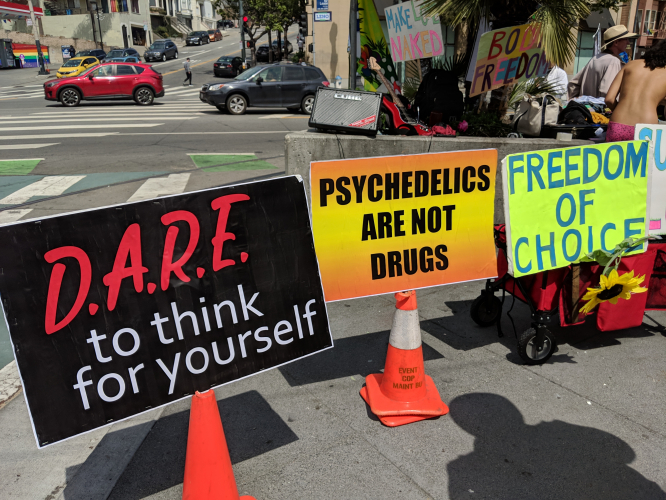 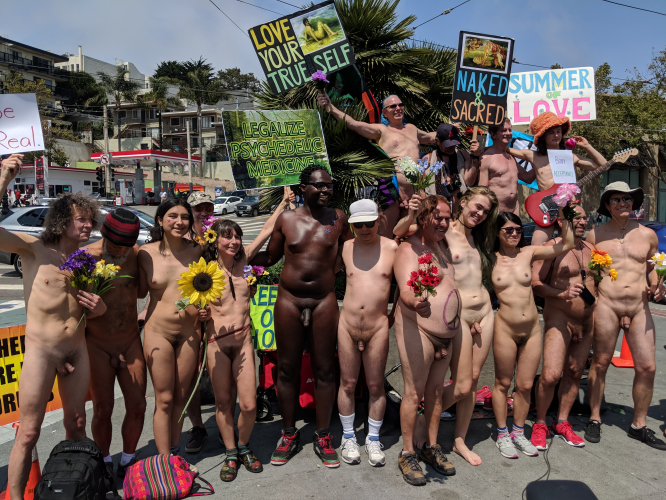 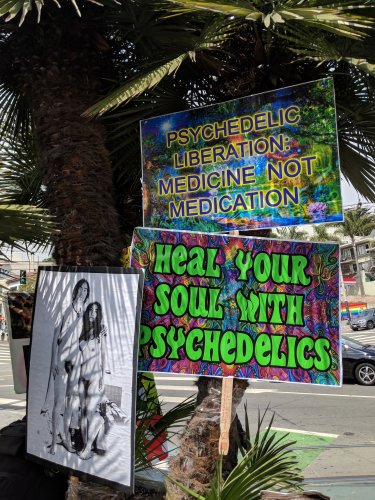 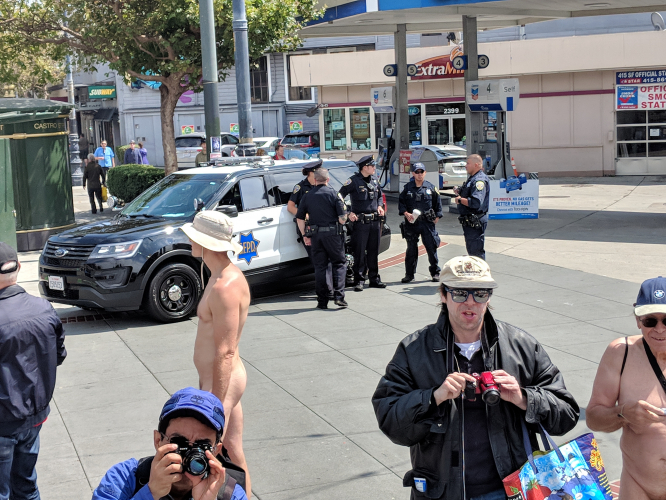 original image (4032x3024)
the officers who provided police escort for us were amazingly kind and supportive of our event
END_OF_DOCUMENT_TOKEN_TO_BE_REPLACED
Add Your Comments
Support Independent Media
We are 100% volunteer and depend on your participation to sustain our efforts!