Add an Event
Newswire
Calendar
Features
Home
Donate
From the Open-Publishing Calendar
From the Open-Publishing Newswire
Indybay Feature
Publish to Newswire
Add an Event
Related Categories: California | San Francisco | Environment & Forest Defense | Government & Elections
Local climate activists to protest tar sands refining without proper review
by Dan Bacher
Tuesday Sep 4th, 2018 11:37 PM
While California is often lauded as a “climate leader” and Governor Jerry Brown is praised as a “climate hero” in national and international media, the reality is much different, as we can see in the  widening gap between lofty California climate goals and the reality on the ground in the Bay Area and other refining centers in the state.

Photo: Environmental justice advocates show in force at a BAAQMD meeting to protest the expansion of Tar Sands refining in the Bay Area. Photo by Peg Hunter. 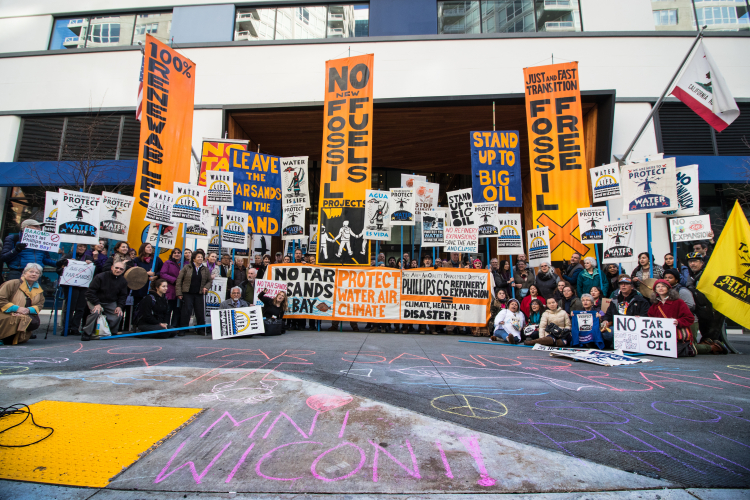 original image (6000x4000)
As thousands get ready to march in the Rise for Climate Day of Action in San Francisco September 8 and the city gears up to host the Governor Jerry Brown co-sponsored Global Climate Action Summit next week, area climate and environmental justice advocates say local air regulators mandated to protect air quality and the climate are taking significant steps to allow increased tar sands refining and creeping refinery emissions in the Bay Area.

A major public protest is expected tomorrow, September 5, at the Bay Area Air Quality Management District (BAAQMD) Board of Directors meeting at 9:30 a.m. at the agency’s headquarters at 375 Beal St., San Francisco.

The event will be preceded at 8 a.m. by an Idle No More SF Bay-led prayer circle and teach-in outside BAAQMD headquarters, according to a press release from the Communities for a Better Environment, 350 Bay Area and the Sunflower Alliance.

The local climate and environmental justice advocates say they plan to “sound the alarm about the widening gap between lofty California climate goals and the reality on the ground here in the Bay Area and other refining centers in the state.”

A recent public records request reveals that BAAQMD staff issued an administrative permit on August 16, 2018 to increase production capacity at the Phillips 66 refinery by 61.3 million gallons per year.

“This permit allows for increased heavy oil processing, or hydrocracking, at the Rodeo facility, and will enable the refiner to process the increased amounts of Canadian tar sands oil it proposes to bring in across San Francisco Bay via nearly tripled oil tanker traffic in a wharf expansion project,” the groups said. “This small but highly significant step actually allows Phillips 66 to begin implementing its goal of switching its San Francisco Refinery over to tar sands.”

“The Rodeo refinery is connected to its sister refinery in Santa Maria by pipeline; together they make up the larger San Francisco Refinery.  Two years ago, multi-community protest shut down a Phillips 66 proposal to increase tar sands deliveries by oil train to the Santa Maria facility,” the groups said.

"The company is trying to sneak its expansion past regulators and the public by pretending each little increase is unconnected, but we aren't fooled,” said Sejal Choksi-Chugh, Executive Director of San Francisco Baykeeper regarding the permit:

The groups said the permit was issued without any public review or notice while Chief Air Pollution Control Officer Jack Broadbent was meeting with First Nations representatives and touring tar sands mining sites in Alberta, Canada.

“The fact-finding tour, which included several BAAQMD board members, took place at the urgent request of members of Idle No More SF Bay, who urged local regulators to connect the dots between the destructive impacts of Canadian tar sands mining on carbon-sequestering boreal forest and First Nations peoples, soaring greenhouse gas emissions and local Bay Area air quality and public health,” they said.

Pennie Opal Plant of Idle No More SF Bay said, “It is wildly irresponsible for Phillips 66 to add to the problems that are causing sick refinery communities and the climate disruption impacting us in California and around the world.  Phillips’ expansion proposal must be stopped and the Bay Area Air Quality Management District is the agency to stop it.”

Jed Holtzman of 350 Bay Area stated: “BAAQMD has committed to a vision of a fossil-free Bay Area in 2050, starting now with steep reductions of the pollution that causes premature death in our communities and destroys the stable climate. Yet its action to allow Phillips 66 to expand its refinery infrastructure ensures more local air pollution and more greenhouse gas emissions. Air District permits must be aligned with agency goals.”

Area climate and environmental justice advocates said news of the secret permit was distressing to many of them.

"This type of rubber-stamping of refinery permits demonstrates how BAAQMD serves at the pleasure of the fossil fuel industry, not the citizens who live in the Bay Area," said refinery neighbor Nancy Rieser of C.R.U.D.E., Crockett-Rodeo United in Defense of the Environment.

Ironically, the permit was issued nearly five years to the day after the Air District board passed a resolution condemning the KXL pipeline, noted Rieser.

That resolution warned against the more intensive processing required by tar sands oil, which causes enormous quantities of toxic, criteria and greenhouse gas pollutants to spew from refinery smokestacks.  As the 2013 resolution made clear, “any increase” of these pollutants will cause negative impacts on the health of local residents.

”Tar sands bitumen is the most carbon-intensive, hazardous and polluting major oil resource on the planet to extract, transport, and refine. Despite this, the Air District staff is intentionally bypassing California Environmental Quality Act (CEQA) review and refusing to evaluate the climate impacts of its permit, which opens the gates to increased tar sands refining,” the groups said.

“Staff argues that it must bypass CEQA, one of California’s greatest environmental protections, because the revised cap-and-trade program (AB 398) that Governor Brown so aggressively pushed for last summer has withdrawn the authority of all regional Air Districts to directly regulate refinery-emitted greenhouse gases. California’s carbon pollution-trading program is now BAAQMD’s chief alibi for eliminating public and board review, and for refusing to protect the climate from oil pollution,” the groups said.

Activists said they are also alarmed by the “gutting and indefinite postponement of a long-awaited particular-matter reduction regulation impacting the Chevron, Marathon (formerly Tesoro) and Shell refineries.”

A letter submitted to the Air District by 25 environmental justice organizations on August 16 points to yet another “secret agreement”—this one signed with the oil industry by the District’s Chief Air Pollution Control Officer. The agreement commits the Air District to propose and advocate for weakened emissions limits.

”As the Global Climate Action Summit rapidly approaches, our air quality regulators and designated climate protectors need to stop coddling the oil industry and start demonstrating real accountability to the public. People’s lives depend on it,” the groups concluded.

Read the Demand Letter to BAAQMD for Refinery PM Clean-Up at http://www.CBECAL.org.

While California is often lauded as a “climate leader” and Governor Jerry Brown is praised as a “climate hero” in national and international media, the reality is much different, as we can see in the  widening gap between lofty California climate goals and the reality on the ground in the Bay Area and other refining centers in the state.

The reality is that Big Oil is the largest and most powerful lobby and the Western States Petroleum Association (WSPA) is the largest and most powerful lobbying organization. As a result, Governor Brown’s oil and gas regulators have approved over 21,000 new oil and gas permits in the past seven years — and Brown controls 4 times the number of offshore wells that Donald Trump does.

This article on Big Oil Regulatory Capture is a must-read for everybody going to the BAAQMD meeting tomorrow, the Rise for Climate March on September 8, and the many other climate events planned for the coming week: http://www.dailykos.com/...