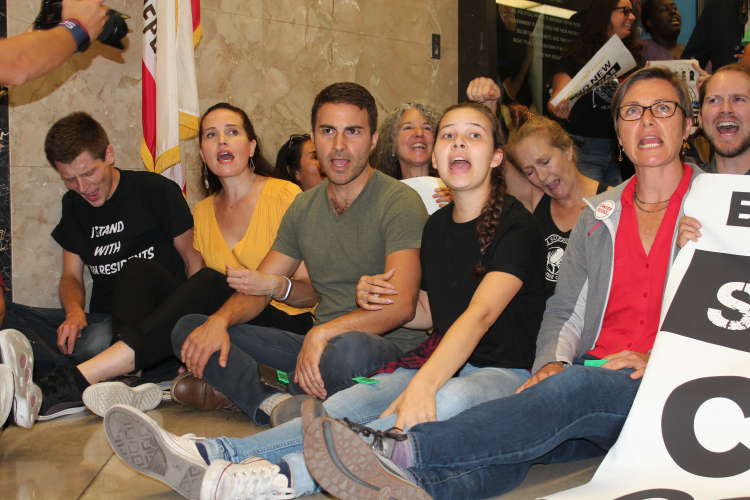 original image (5184x3456)
The California Highway Patrol arrested four activists as they tied themselves to a mock “oil derrick,”  sang songs and blocked the driveway of the entrance to the garage at the State Capitol on Monday, August 20.

The arrests were the culmination of a day of protest against Governor Jerry Brown’s expansion of offshore and onshore drilling in California. The day began with a press conference on the sidewalk of the north steps of the State Capitol, followed by a sit outside the doors of the Governor’s Office inside the State Capitol.

People participating in the sit in sang songs, including “Which side are on you on, Jerry Brown?” They also shouted chants, including “No justice, no peace, no oil relief.”

However, the climate justice advocates weren’t arrested until they blockaded the entrance to the capitol garage, where the legislators, governor’s staff and other officials park.

The arrests at the Capitol were preceded by the arrests of six young activists two weeks earlier, also protesting Brown’s expansion of oil drilling in the state: http://www.dailykos.com/...

Before he was arrested, Kai Newkirk, Co-founder of Democracy Spring, stated in a Facebook post the reason why he was willing to risk arrest.

“California is on fire. Toxic oil drilling in California is fueling the flames. We can no longer accept Jerry Brown’s cowardice and hypocrisy on climate. It’s time to SIT IN to demand that he STAND UP to Big Oil,” said Newkirk.

After his release from police custody early Tuesday morning, he said, “All four of the ~20 of us who sat in and were ultimately arrested hours later at the California state capitol yesterday, were released around ~1:45 a.m. Lot of waiting in a place of injustice & pain, but we supported each other and tried to connect with others in a good way. Mass incarceration and the drug war are a plague on our nation, especially the poor and Black and brown people.”

“We lifted up the urgent issue of Jerry Brown’s cowardice on climate and showed the growing power demanding that he stand up to Big Oil to protect our climate and the health of our communities. Thanks all for the support yesterday, and gratitude to everyone who took action,” he stated.

17-year-old Nalleli Cobo, a Los Angeles resident who was sickened by toxic emissions from the oil drilling site, AllenCo., near her home, said the Governor has it in his power to issue an executive order to protect communities from oil extraction that state scientists identified as being toxic in 2015.

“In 2011 when I was 9 years old, I suffered from lack of sleep, headaches, stomach pains, body spasms and asthma,” she explained. “After we worked with community members and then Senator Barbara Boxer to shut down the AllenCo. site, all of these symptoms disappeared in 2013 except that I now have asthma. I still have to use two inhalers and take pills daily.”

“I'm here to remind Governor Brown that clean air is a basic human right that shouldn't be denied to anyone based on a zip code, age, gender, ethnicity or socioeconomic status,” she said. “As a person who got sick from oil extraction, I work with the STAND-LA coalition and with other groups to eliminate toxic neighborhood oil drilling happening near our homes.”

While Rolling Stone, the New York Times and other media have lauded Brown as a climate leader as he speaks at climate conferences across the globe, his administration has presided over a big expansion of offshore and onshore oil and gas drilling in California. His regulators have approved over 21,000 new permits for oil and gas drilling since 2011 when he began his third term as governor.

And while Brown has said he opposes Trump’s proposal to open new federal leases to offshore drilling off the California coast, his administration approved 238 new offshore wells in Los Angeles and Ventura Counties between 2012 and 2016 alone.That’s an increase of 17 percent, according to data released in a report issued by Fractracker Alliance in February 2017. To read the complete report, go to: http://www.fractracker.org/…(

The activists also said California produces some of the most climate-damaging crude in the world, with no plans  to ramp down extraction. A recent analysis confirmed that continued fossil fuel development is throwing California off track for meeting its own climate goals as well as those enshrined in the Paris agreement.

"Governor Brown isn’t a climate leader, he’s a cancer causer,” said Karuna Jaggar, executive director of Breast Cancer Action, a cancer survivor, who was diagnosedwith a rare form of cancer a year ago. “Every stage of oil production—from drilling, refining, waste disposal, storage and consumption—exposes people to carcinogens and hormone disruptors that raise the risk of breast and other cancers. Put simply, fossil fuels are fueling cancer.”

“And hundreds of thousands of Californians living near drilling sites, a majority of whom are people of color and low income people, are at the greatest risk,” she said, citing a recent analysis released by the Center for Biological Diversity: http://www.biologicaldiversity.org/...

“It takes more than hosting a big climate summit to protect the planet and public health. Now is the time for Governor Brown to walk the talk by taking strong action to prevent climate change and cancer,” Jaggar emphasized.

“Our Governor has focused on false solutions which allow the fossil fuel industry and climate profiteers to continue to destroy what we need to simply exist,"  said Pennie Opal Plant, co-founder of Idle No More SF Bay.  "Instead of protecting the citizens of California and the climate by creating a managed and just transition off of fossil fuels he has allowed the fossil fuel industry to assist in writing bills such as the Cap and Trade bill from last year which allowed refineries to continue to poison communities.”

“I invite the Governor to align his actions with his claim of being a climate leader. True climate leaders stand up to Big Oil and don't help them continue to profit off of the health of communities like mine and the desecration of the sacred system of life,” Opal Plant stated.

“If you do not stand up now, you are not being a good ancestor,” she concluded.

The Brown’s Last Chance campaign kicked off in April with a letter demanding that Governor Brown halt the development of all new dirty fuel projects in California, create a plan to phase out all fossil fuel extraction as quickly as possible and provide support and opportunities for those most impacted by the transition. More than 800 organizations have signed the letter to date.

Monic Uriarte of Stand LA, the mother of Nalleli Cobo, discussed how the recommendations of a study on fracking and acidifying in California by the state’s scientists still haven’t been put into effect after three years: ccst.us/...

“We are low income and immigrants, but we have the right to clean air. Three years ago the state’s scientists released a study that fracking is not compatible with public health. They have the scientific proof — now it’s time to close these operations down,” Uriarte explained.

“The fact that people in California are risking arrest today for protecting their homes, health and the climate is a travesty,” added Mary Zeiser from Stand.Earth.  "We call upon our Governor, Jerry Brown, ‘this is your last chance to walk your talk on climate leadership and we’re counting on you to do what’s right for the people of California.’”

Background: Brown received $9.8 million from oil and gas cos. and utilities

While Governor Jerry Brown receives accolades for his frequent speeches at climate conferences around the world, he is in reality a recipient of millions of dollars of Big Oil and Big Gas money that has promoted the expansion of offshore and onshore drilling in California in his third and fourth terms as Governor.

Consumer Watchdog's report, "Brown's Dirty Hands," reveals how Brown and his top appointees used the California Democratic Party (CDP) as a “slush fund, sucking in contributions from unpopular energy companies in close proximity, and sometimes on the same day, that his Administration helped those companies in controversial ways.”

“Twenty-six energy companies including Occidental, Chevron, NRG and the state's three major investor-owned utilities - all with business before the state - donated $9.8 million to Jerry Brown's campaigns, causes, and initiatives, and to the California Democratic Party since he ran for Governor. Donations were often made within days or weeks of winning favors. The three major investor-owned utilities alone contributed nearly $6 million,” according to the report. “Between 2011 and 2014, the energy companies tracked by Brown's Dirty Hands donated $4.4 million to the Democratic Party, and the Democratic Party gave $4.7 million to Brown's re-election committee.”

Since Consumer Watchdog’s report was released in 2016, both the California Democratic Party and the Democratic National Committee (DNC) have adopted bans on fossil fuel donations, due to political pressure from Oil Money Out and other organizations: http://www.huffingtonpost.com/…

However, the DNC later reversed the earlier ban on fossil fuel donations: thehill.com/...

Meanwhile, the oil industry, the most powerful corporate lobby in California, continues to spend millions of dollars on lobbying each Legislative Session and on political campaigns each election season in California. The Western States Petroleum Association (WSPA) and Big Oil wield their power in 6 major ways: through (1) lobbying; (2) campaign spending; (3) serving on and putting shills on regulatory panels; (4) creating Astroturf groups: (5) working in collaboration with media; and (6) contributing to non profit organizations. For more information, go to: http://www.dailykos.com/… 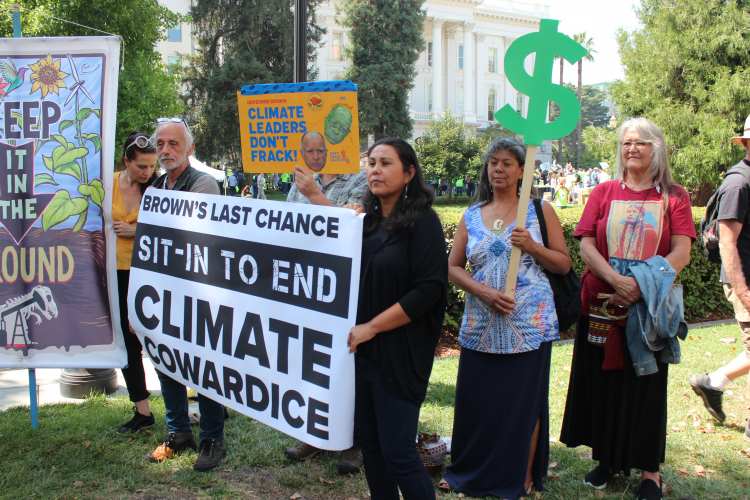 original image (5184x3456)
Climate justice advocates held a press conference on the sidewalk in front of the Capitol's north steps before they went into the building to the Governor's Office. Photo by Dan Bacher.
§Morning Star
by Dan Bacher Sunday Aug 26th, 2018 11:50 AM 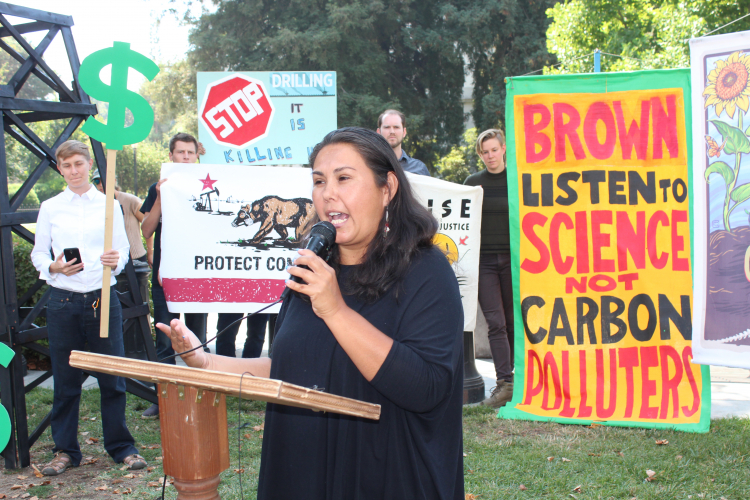 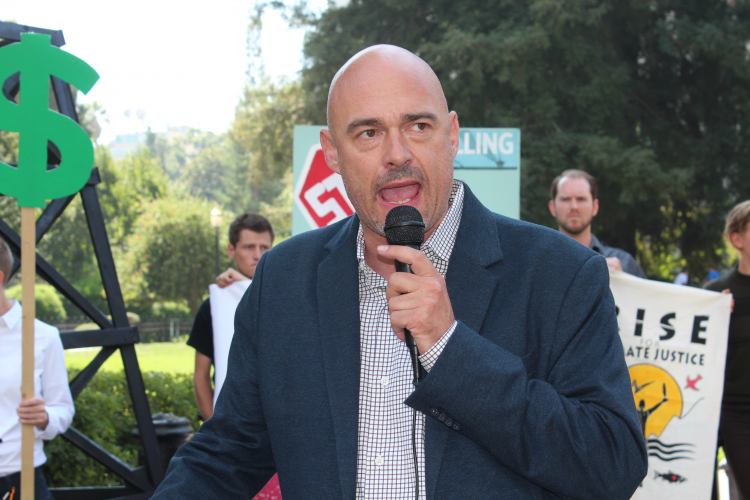 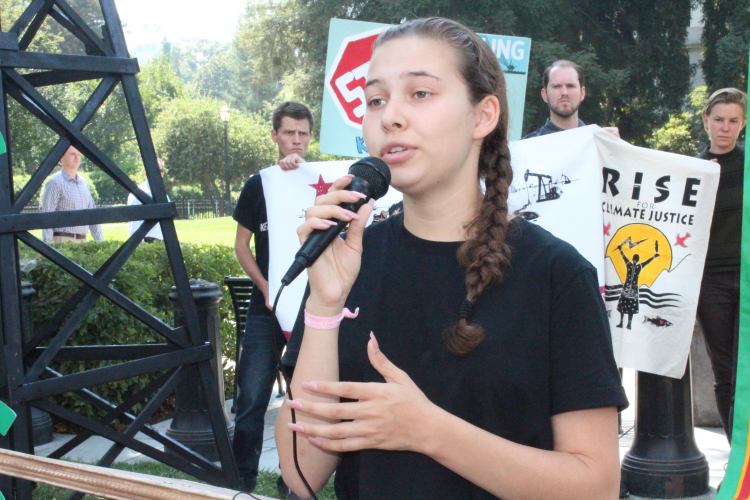 original image (5184x3456)
17-year-old Nalleli Cobo, a Los Angeles resident, discusses how she was sickened by toxic emissions from the oil drilling site, AllenCo., near her home. Photo by Dan Bacher.
§Monic Uriarte
by Dan Bacher Sunday Aug 26th, 2018 11:50 AM 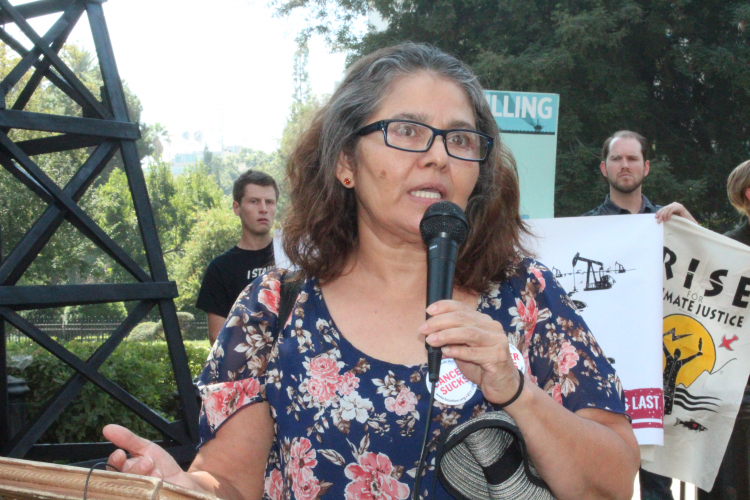 original image (5184x3456)
Monic Uriarte of Stand LA, the mother of Nalleli Cobo, discussed how the recommendations of a study on fracking and acidifying in California by the state’s scientists still haven’t been put into effect after three years
§Mothers Out Front
by Dan Bacher Sunday Aug 26th, 2018 11:50 AM 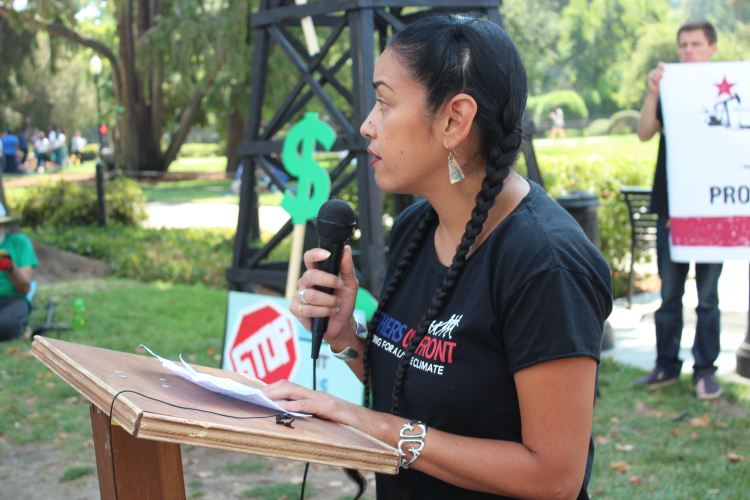 original image (5184x3456)
Speakers from Mothers Out Front and other organizations spoke at the press conference. Photo by Dan Bacher.
§Adam Scow
by Dan Bacher Sunday Aug 26th, 2018 11:50 AM 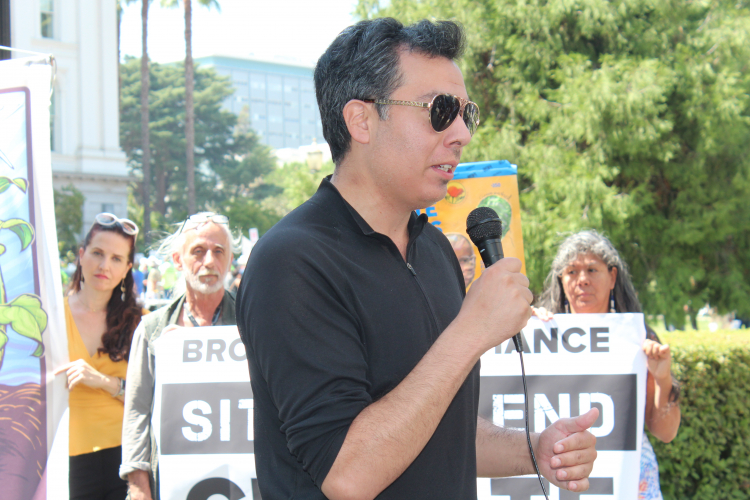 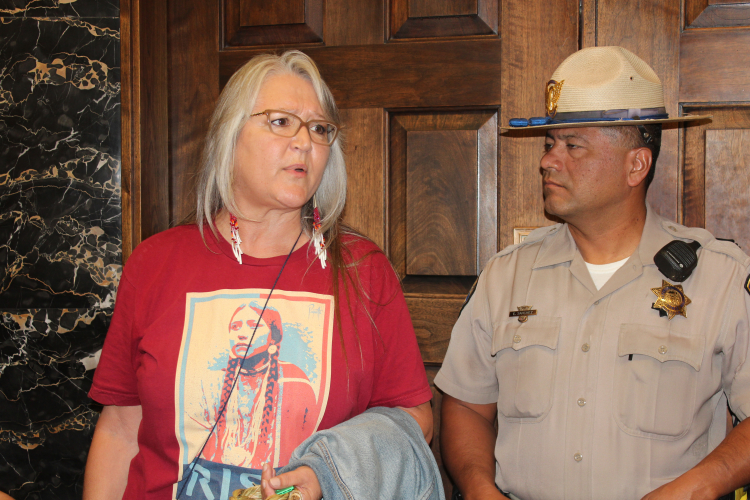 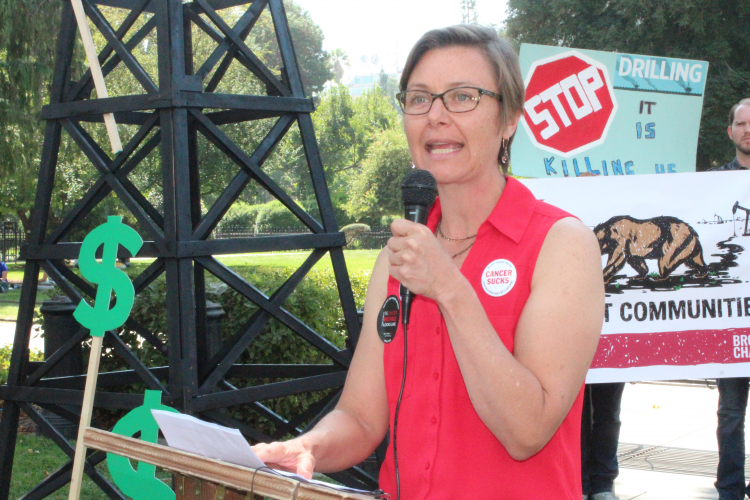 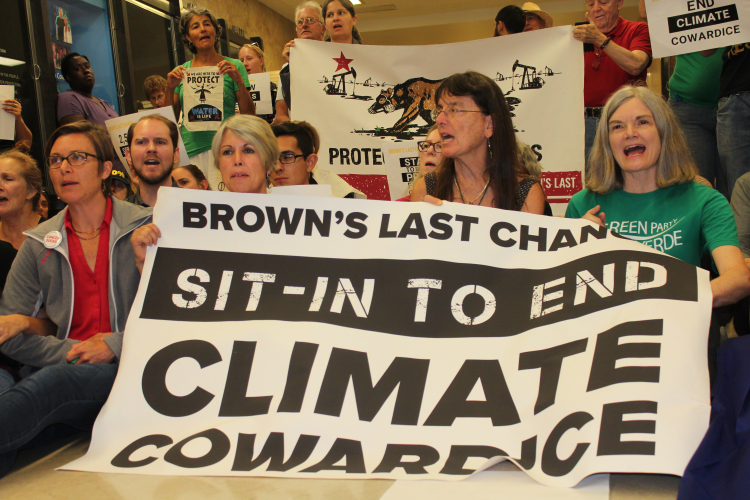 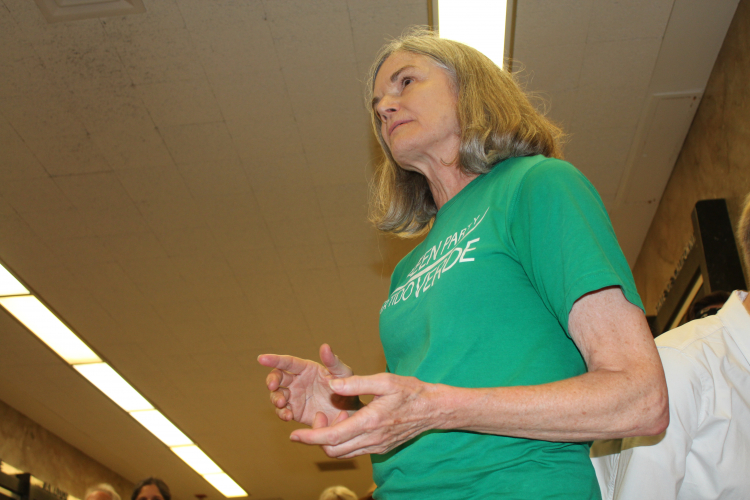 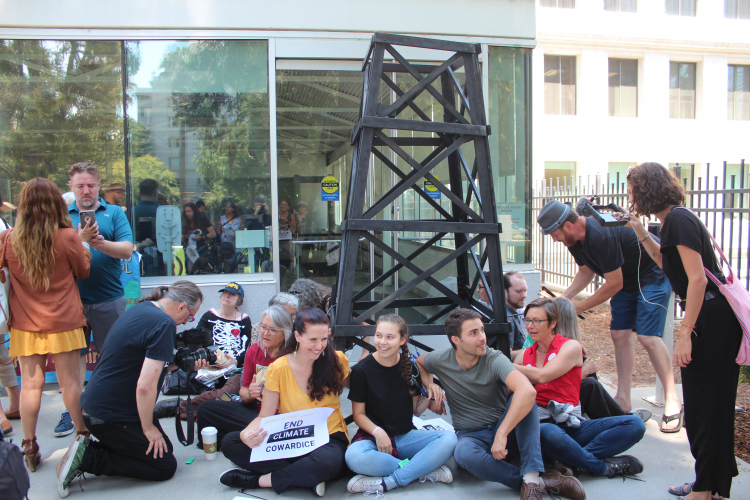 original image (5184x3456)
Climate justice activists tied themselves to a mock oil drilling pumpjack in front of the Capitol doors. Photo by Dan Bacher.
§Locked to the derrick
by Dan Bacher Sunday Aug 26th, 2018 11:50 AM 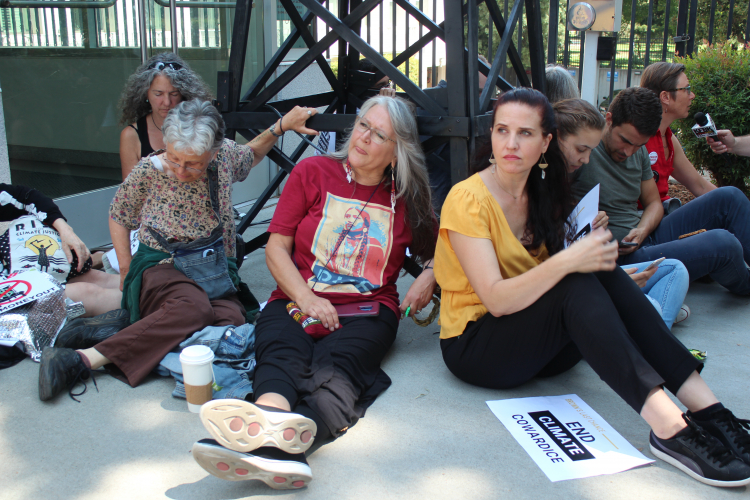 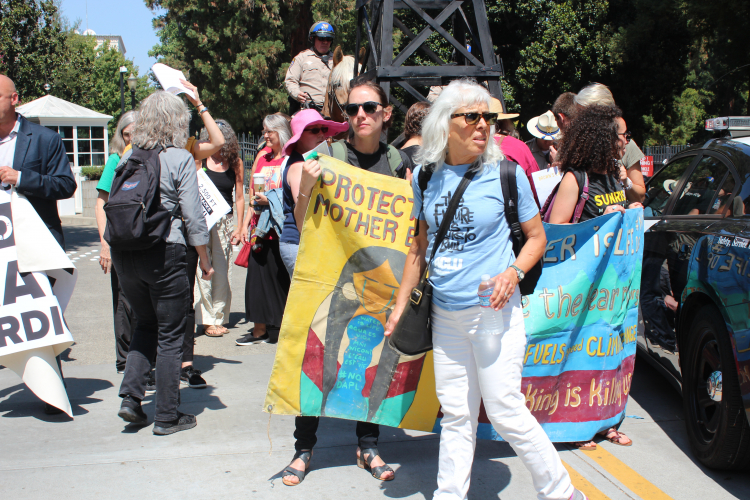 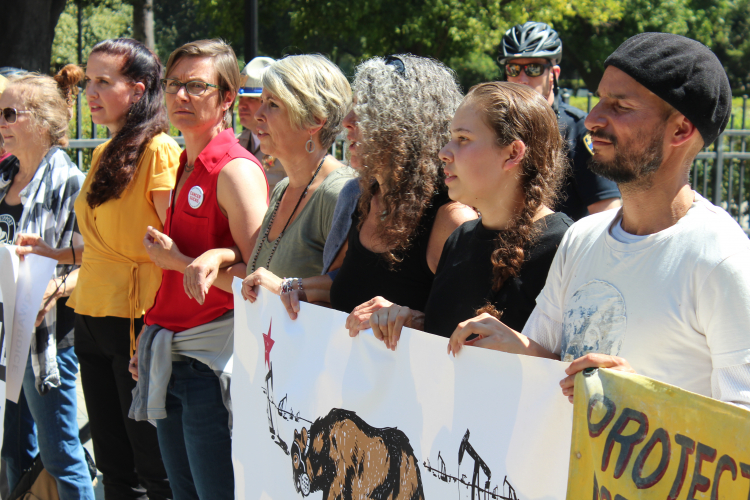 original image (5184x3456)
Protesters standing up against onshore and offshore drilling at the north entrance to the Capitol Garage. Photo by Dan Bacher.
§Blocking the gate
by Dan Bacher Sunday Aug 26th, 2018 11:50 AM 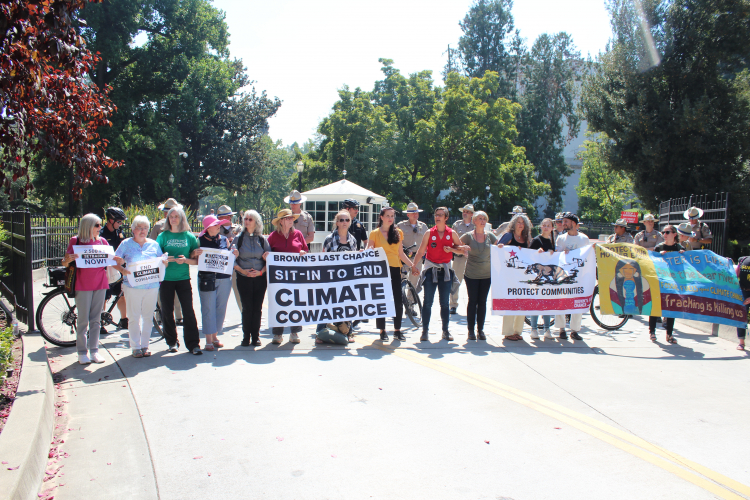 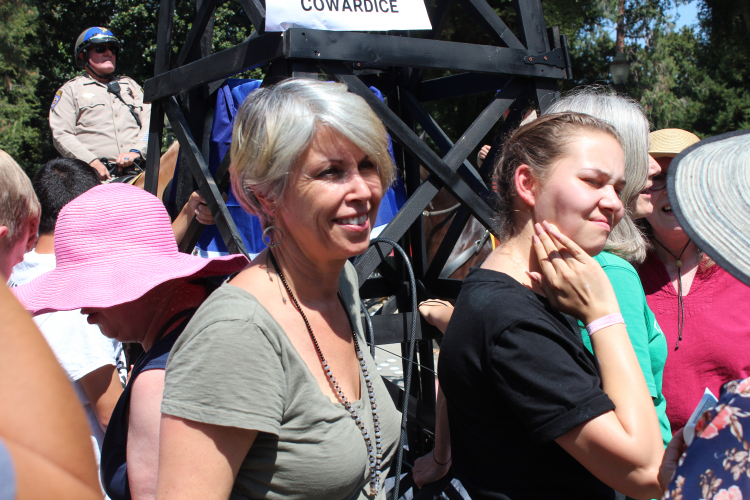 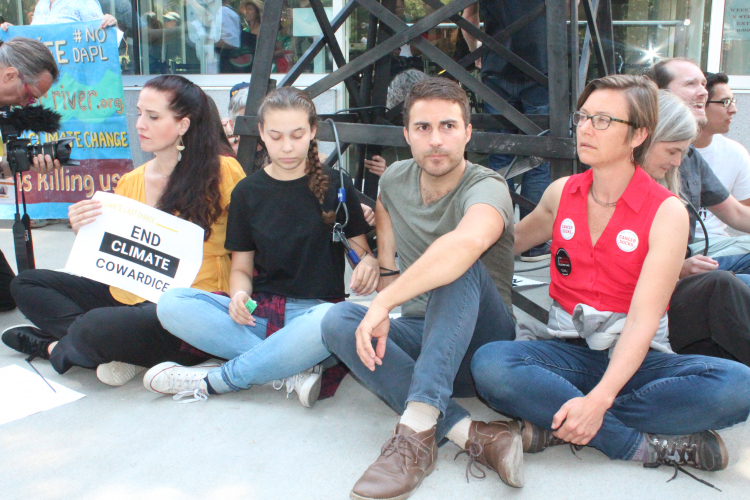 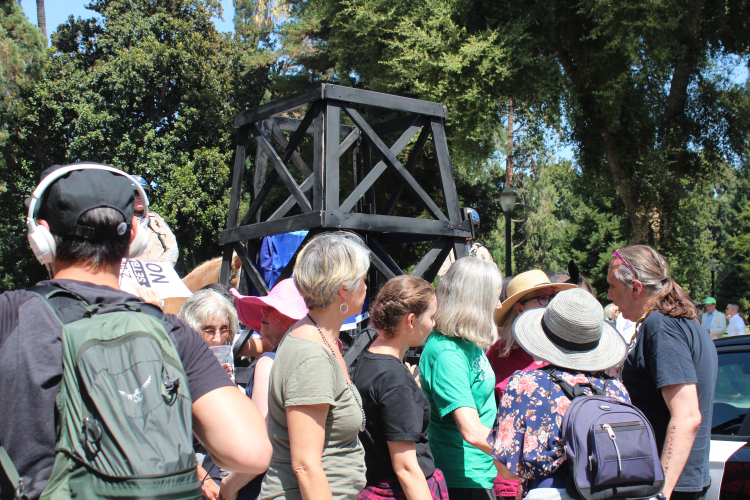 original image (5184x3456)
Activists stand up against the pro-BigOil policies of Governor Brown. Photo by Dan Bacher.
Add Your Comments
Support Independent Media
We are 100% volunteer and depend on your participation to sustain our efforts!