Add an Event
Newswire
Calendar
Features
Home
Donate
From the Open-Publishing Calendar
From the Open-Publishing Newswire
Indybay Feature
Publish to Newswire
Add an Event
Related Categories: California | Central Valley | Environment & Forest Defense | Government & Elections
Fishermen, tribal members and conservationists push for increased flows on San Joaquin River
by Dan Bacher
Wednesday Aug 22nd, 2018 1:08 PM
“We must restore our rivers if we are going to have clean water and fish into the future,” said Morning Star Gali, Tribal Organizer for Save California Salmon and Pit River tribal member. “Large fires and lack of water supply are caused by climate change and wasteful water use practices, not environmental laws. Appropriate flows are needed for the health of our sacred rivers, to restore the health of our communities, and to protect the quality of California's water supply.” 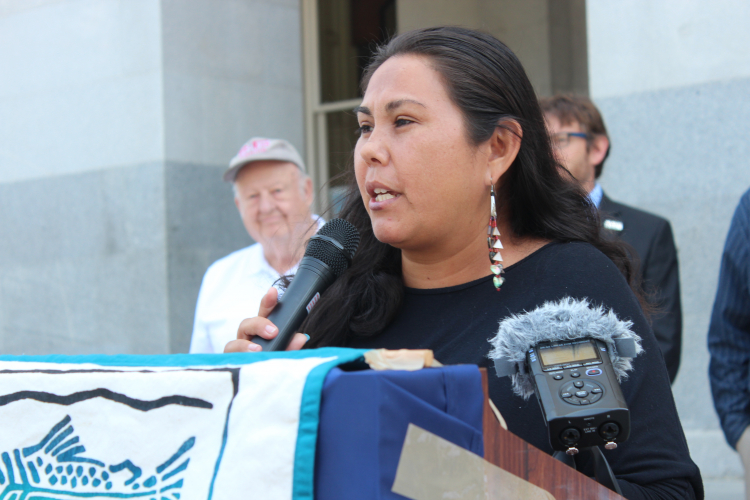 original image (5184x3456)
One day before the State Water Resources Control Board’s hearing on increased flows for the San Joaquin River and its three tributaries was held in Sacramento on August 21, Jonas Minton, Senior Water Policy Advisory for the Planning and Conservation League, expressed exactly what is is at at stake in the board’s decision.

”The truth is the truth. Fish need water,” said Minton at a press conference held by a coalition of environmental organizations, Northern California Indian tribal members, and commercial and recreational fishing organizations on the West Steps of the State Capitol.

“In the 23 years since the Plan was last updated the fisheries of the Sacramento - San Joaquin watershed have been decimated, some to the very edge of extinction,” said Minton. “Californians cannot afford further delays in the adoption of strong standards that protect our rivers for current and future generations.”

Minton joined with representatives of the Pacific Coast Federation of Fishermen’s Associations, Pit River Tribe, Water for Fish, Sierra Club California, San Francisco Baykeeper, Restore the Delta and the Tuolumne River Trust to share their perspectives as to why it is imperative that the State Board increase flows for the San Joaquin River and its three lower tributaries that is designated as outflow through the San Francisco Bay.

“We must restore our rivers if we are going to have clean water and fish into the future,” said Gali. “Large fires and lack of water supply are caused by climate change and wasteful water use practices, not environmental laws. Appropriate flows are needed for the health of our sacred rivers, to restore the health of our communities, and to protect the quality of California's water supply.”

Dick Pool, a member of the salmon industry who is on the Board of the Golden Gate Salmon Association and is President of the Advocacy Group Water4Fish, said his business is manufacturing salmon equipment. He has been in business for forty years and fighting to restore the Central Valley salmon for forty years.

“Let me say this,” said Pool. “I am involved with several coalitions that are working hard on habitat projects that will help with recovery.  We have some very good ‘on the ground’ projects on the drawing board. However, none of them come close to the gains we would achieve with increased flows. The loss of the river and tributary flows has done more damage to the salmon than anything else.  Increasing them will undo a lot of that damage.”

Pool then held up a chart documenting the deep relationship between river flows and salmon escapement to the San Joaquin, Stanislaus, Tuolumne and Merced rivers.

“This chart shows the relationship between flows and returning adult salmon from the ocean,” said Pool as he explained the chart. “It shows the number of fall-run salmon that have returned to the San Joaquin River between 1990 and 2017. In 1990 only 741 salmon returned to the San Joaquin because of a drought -- Only 741 salmon in a total of five separate rivers. That is only a little over 100 fish per river and it is clearly an extinction waiting to happen.”

“But look ahead, the line is ascending and by the year 2000 it hits 40,000 fish,” continued Pool. “Why did this happen? It happened from increased precipitation and increased flows. When flows are good, the salmon will recover. When they are bad we risk extinction. The line then crashes all the way down to 2007.”

“Between 2004 and 2008 the federal government canceled all the salmon pumping restrictions. Pumping went up and flows went down,” said Pool. “On top of that, there were two years of bad ocean conditions. By 2007, 2008 and 2009 we were back at extinction levels. In 2009, the biological pumping restrictions were put back into place.  We had a very wet spring in 2011, the salmon responded, and we had improvements again.”

“The San Joaquin River remains very poor in overall salmon production but flows are the right place to start. Please stay with us in this fight.  Extinction is not an option,” Pool concluded.

Noah Oppenheim, Executive Director of the Pacific Coast Federation of Fishermen’s Associations (PCFFA), commented on how the State Board’s decision would impact dozens of local economies dependent on Chinook salmon and other fish populations that need healthy rivers and a vibrant San Francisco Bay-Delta Estuary to thrive.

"California's salmon industry has lost over 90 percent of its commercial fishing jobs over the past 40 years,” said Oppenheim. “The state's position has been made clear: municipal and agricultural water users can no longer ignore their impacts to fishing jobs and the environment. Our rivers have been sucked dry for too long, and today fishermen are fighting back.”

Oppenheim pointed out how there were 4,500 commercial salmon fishing boats in California 40 years ago. After years of salmon declines and season shutdowns, there are fewer than 450 boats now.

“We lost 90 percent of the salmon industry,” said Oppenheim. “That means that there are thousands of boats that once fed families that are in the graveyard. The Department of Water Resources and Bureau of Reclamation has been stepping on the fishermen’s faces for decades. The State Water Board is now legally bound to obey the law.”

“This is not a case of fish versus people,” emphasized Oppenheim. “We are the people… the salmon fishermen are here and we will take our water back!”

Ben Eichenberg, the Staff Attorney for San Francisco Baykeeper, emphasized that the Board should set strong requirements on flow levels and temperature based on the best available science. "And the science definitively shows that the proposed 40% flow levels are not enough to protect fish and wildlife in San Francisco Bay,” he said.

Eichenberg said that the unimpaired flow in the San Joaquin should be 50 to 60 percent of the total flow — and that the Board should use 50 percent as the starting point.

Sonia Diermayer of Sierra Club California, referring to the “Stop the Water Grab” signs that corporate agribusiness had printed out for their rally, said, “We need to stop the real water grab and have the board give the flows needed by fish.”

“This is clearly unsustainable and has caused a crash in the salmon-based ecosystem,” explained Drekmeier. “The Bay-Delta Water Quality Control Plan is our last best chance to balance the needs of humans with those of every other creature that depends on the Tuolumne River. Through more efficient use of water and by developing alternative supplies, such as recycled water, we can meet the challenge.”

Barbara Barrigan-Parrilla, Executive Director of Restore the Delta, noted that although the State Board will be taking in-person public comments on the Bay-Delta Plan updates at their meetings on August 21 and 22, the Board announced on Wednesday, August 15, that they had delayed their vote on the adoption of those updates to a later, undisclosed date.

“Originally, the board was scheduled to vote on these proposed amendments after all public comments were received on August 22. Environmental and public trust organizations were disappointed by this news.” said Barrigan-Parrilla.

You can watch the recorded video on the Restore the Delta Facebook page: https://bit.ly/2nKwhgX

The press conference and water board hearings took place as the same corporate agribusiness interests fighting against increased flows for fish on the San Joaquin River are relentlessly promoting Governor Jerry Brown’s Delta Tunnels project. The project consists of two massive, 35-mile-long tunnels under the Delta that would divert Sacramento River directly to the state and federal pumps in the South Delta, bypassing the Delta.

Opponents say the project would devastate West Coast fisheries and fish populations that depend on healthy Sacramento River flows to sustain a thriving San Francisco Bay-Delta. Besides hastening the extinction of Sacramento River spring and winter Chinook, Central Valley steelhead, Delta and long fin smelt, green sturgeon and other fish populations, the project would also imperil the salmon and steelhead fisheries on the Trinity and Klamath rivers. 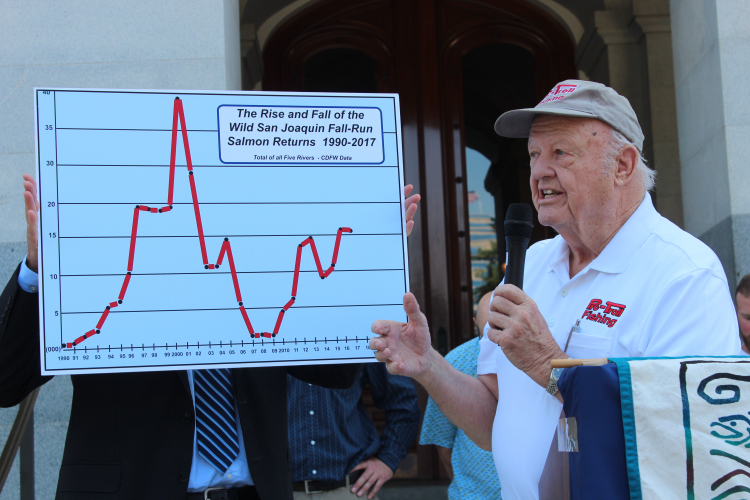 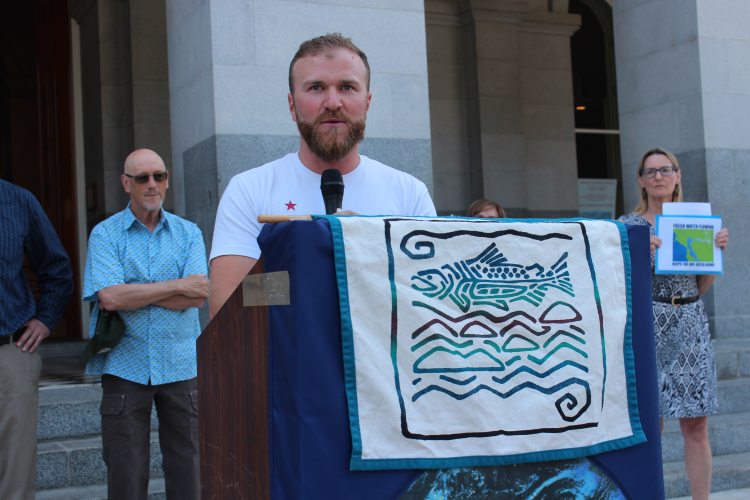 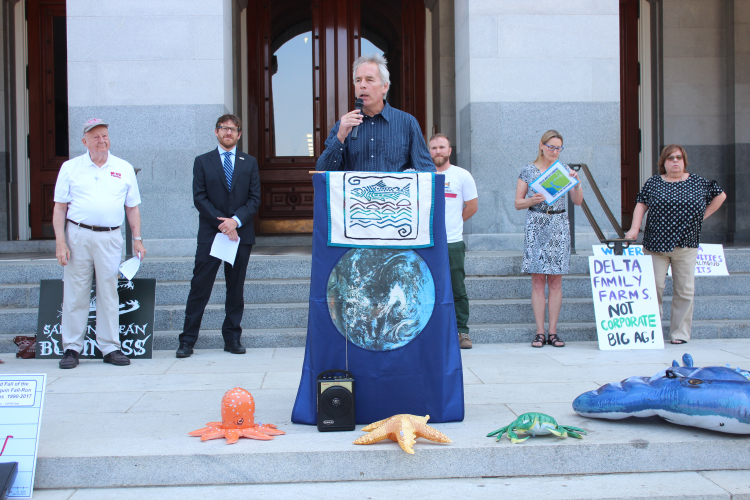 original image (5184x3456)
Representatives of the Pacific Coast Federation of Fishermen’s Associations, Pit River Tribe, Water for Fish, Sierra Club California, San Francisco Baykeeper, Restore the Delta, Tuolumne River Trust and Planning and Conservation League shared their perspectives as to why it is imperative that the State Board increase flows for the San Joaquin River and its three lower tributaries. Photo by Dan Bacher. 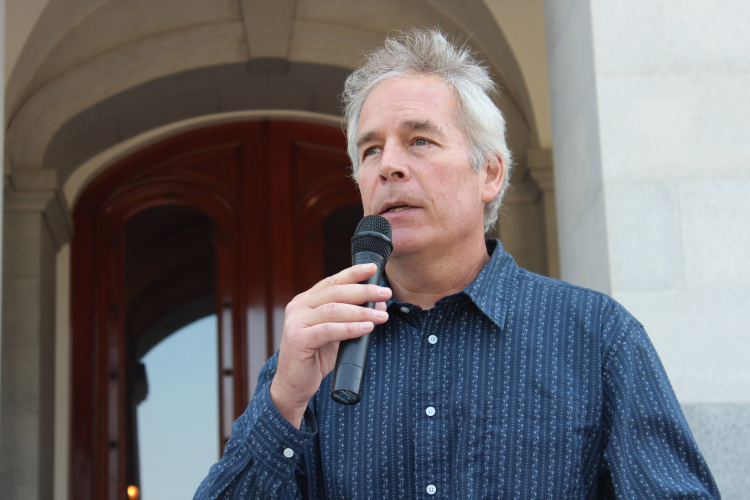 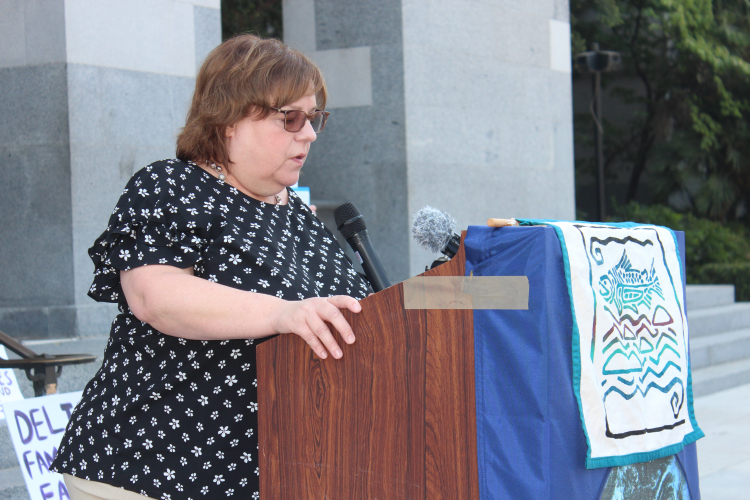 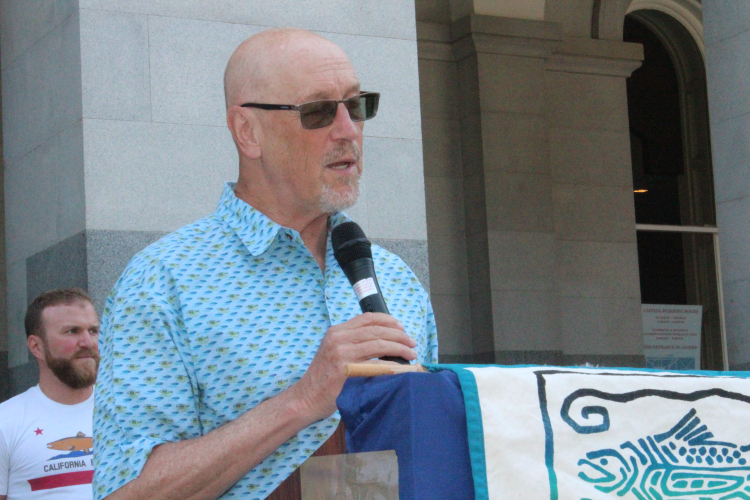 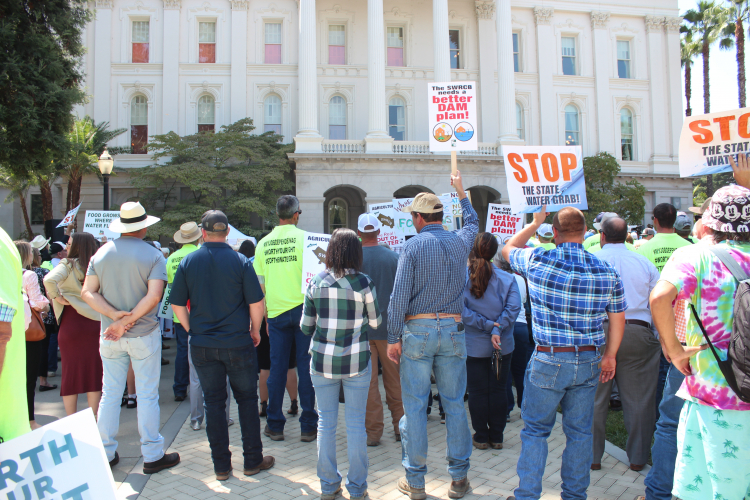 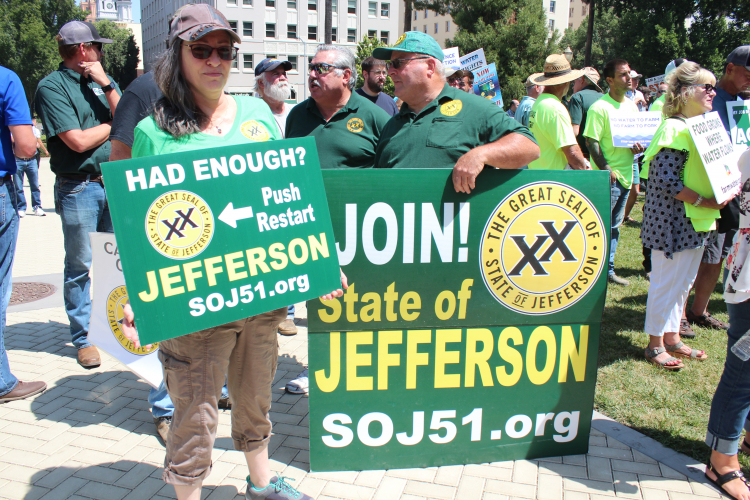 original image (5184x3456)
Opponents of increased flows for fish included supporters of the State of Jefferson. Photo by Dan Bacher.
Add Your Comments
Support Independent Media
We are 100% volunteer and depend on your participation to sustain our efforts!