Add an Event
Newswire
Calendar
Features
Home
Donate
From the Open-Publishing Calendar
From the Open-Publishing Newswire
Indybay Feature
Publish to Newswire
Add an Event
Related Categories: California | Central Valley | Environment & Forest Defense | Government & Elections
Most of 21,000 oil wells approved under Jerry Brown are in low income areas, communities of color
by Dan Bacher
Saturday Aug 18th, 2018 1:00 PM
"I wonder if Jerry Brown would continue to shield the fossil fuel industry if his family was forced to breathe the same air we do,” said Francisco Gonzalez, a Kern County resident. “I hope he will consider communities like mine and put an end to the drilling free-for-all. It's too late for me, but all the kids deserve better.” 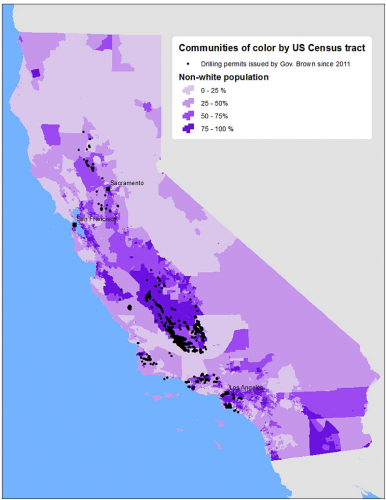 original image (800x1035)
Despite California’s image as a “green” and “progressive” leader, there has been a massive expansion of oil and gas drilling in the state under Governor Jerry Brown — and most of these new wells are located in communities with above average poverty rates and/or communities of color.

The state’s Division of Oil, Gas and Geothermal Resources (DOGGR) approved 21,397 new wells between Jan. 1, 2011 and April 14, 2018, according to a new analysis from the Center for Biological Diversity (CBD).

The total number of wells includes the hundreds of offshore wells approved under the Brown administration. Brown’s regulators approved 238 new wells in state waters under existing leases in Ventura and Los Angeles Counties in just four years, from 2012 to 2016.

This offshore expansion began just as a network of so-called “marine protected areas,” created under the helm of Catherine Reheis-Boyd, President of the Western States Petroleum Association (WSPA) and Chair of the Marine Life Protection Act (MLPA) Initiative Blue Ribbon Task Force, went into effect on the South Coast.

The new analysis found that 77 percent of the permits for new oil and gas wells issued since Brown took office in 2011 “are in communities with a higher-than-average percentage of residents living below twice the poverty line and/or communities with a majority nonwhite population.”

“The massive proliferation of dirty drilling under Governor Brown isn’t just hypocritical, it’s horribly unjust,” said Shaye Wolf, climate science director at the Center. “Because of Brown’s refusal to rein in California’s oil extraction, thousands of wells operate dangerously close to homes and schools in vulnerable communities already suffering from some of the dirtiest air in the nation.”

In addition to “fueling the global climate crisis,” Wolf said “oil-drilling operations release toxic pollutants into surrounding air that cause cancer, asthma and other health problems.”

“I wonder if Jerry Brown would continue to shield the fossil fuel industry if his family was forced to breathe the same air we do,” said Francisco Gonzalez, a Kern County resident. “I hope he will consider communities like mine and put an end to the drilling free-for-all. It's too late for me, but all the kids deserve better.”

As the huge expansion of onshore and offshore oil drilling under Governor Brown is exposed, a growing number of people and organizations are calling on Brown to confront California’s oil and gas production prior to hosting the Global Climate Action Summit in San Francisco this September.

On August 7, 35 California youth held a sit-in at Governor Jerry Brown’s office at the state capitol in Sacramento, demanding that he freeze new fossil fuel drilling and develop a plan to phase out oil and gas extraction. Six of them were arrested that night as they continued the sit-in in at the door of the Governor’s Office after the office closed that  evening.

Before the State Police arrested them, the young activists explained why they were willing to risk arrest — and vowed not to back down from their demand that the Brown administration halt new oil drilling.

“My generation is going to feel the biggest effect of climate change and I am sitting here risking arrest because Jerry Brown is not doing enough,” said Carmen Bouquin, age 18. "He is putting corporate interests over people and continuing to use his power to contribute to climate change while our communities are feeling the impacts of erratic climate change."

”All of these oil and gas projects need water,” stated Niria Alicia, age 26, earlier that day. “The intensive extraction of fossil fuel threatens our rivers and theatens the salmon and other fish that live in them. The same water is used to frack in the backyards of indigenous migrant farmworkers. We need to keep the water in our rivers and the oil in the ground, if we are to have the chance at a future.”

On April 11, a diverse array of Indigenous, environmental, public health, faith, labor and community groups launched the Brown’s Last Chance campaign to demand that he halt new oil and gas extraction and devise a “just transition plan” to phase it out entirely. To date more than 800 organizations have signed on.

On July 12, over two dozen climate scientists endorsed the calls of the Brown’s Last Chance campaign, warning that a phaseout of oil and gas production is necessary to meet the Paris climate targets and protect millions of Californians living near oil and gas wells.

Other prominent individuals calling on Brown to address the state’s oil and gas extraction include Rigoberta Menchu of Guatemala and five other women Nobel laureates and more than 100 local elected officials across California.

“This is a pivotal moment for Jerry Brown’s legacy. Will he exit political life leaving big polluters in charge or as a champion for the health and future of all Californians?” Wolf concluded.

While Governor Jerry Brown receives accolades for his frequent speeches at climate conferences around the world, he is in reality a recipient of millions of dollars of Big Oil and Big Gas money that has promoted the expansion of offshore and onshore drilling in California in his third and fourth terms as Governor.

Consumer Watchdog's report, "Brown's Dirty Hands," reveals how Brown and his top appointees used the California Democratic Party (CDP) as a “slush fund, sucking in contributions from unpopular energy companies in close proximity, and sometimes on the same day, that his Administration helped those companies in controversial ways.”

“Twenty-six energy companies including Occidental, Chevron, NRG and the state's three major investor-owned utilities - all with business before the state - donated $9.85 million to Jerry Brown's campaigns, causes, and initiatives, and to the California Democratic Party since he ran for Governor. Donations were often made within days or weeks of winning favors. The three major investor-owned utilities alone contributed nearly $6 million,” according to the report. “Between 2011 and 2014, the energy companies tracked by Brown's Dirty Hands donated $4.4 million to the Democratic Party, and the Democratic Party gave $4.7 million to Brown's re-election committee.”

Since Consumer Watchdog’s report was released in 2016, both the California Democratic Party and the Democratic National Committee (DNC) have adopted bans on fossil fuel donations, due to political pressure from Oil Money Out and other organizations: http://www.huffingtonpost.com/…

More recently, the DNC has backtracked on its ban on fossil fuel donations: http://www.huffingtonpost.com/...

However, the oil industry, the most powerful corporate lobby in California, continues to spend millions of dollars on lobbying each Legislative Session and on political campaigns each election season.

As Brown promotes new oil and gas drilling in California, he is also collaborating with the Trump administration on the construction of the Delta Tunnels, considered by opponents to be the most environmentally destructive public works project in California history. The 35 mile long tunnels would devastate West Coast salmon and other fish populations by diverting Sacramento River water before it reaches the estuary, as well as imperil the salmon and steelhead on the Trinity River, the major tributary of the Klamath River, that is diverted via a tunnel through the Trinity Mountains into the Sacramento River watershed at Whiskeytown Reservoir. 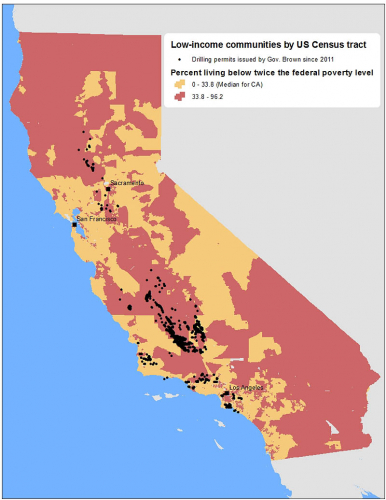 original image (800x1035)
Add Your Comments
Support Independent Media
We are 100% volunteer and depend on your participation to sustain our efforts!