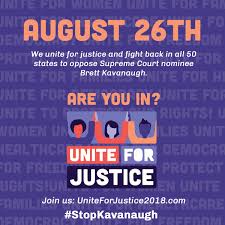 Protest Brett Kavanaugh confirmation to the Supreme Court! Supreme Court Justices are nominated and confirmed to the Court for a lifetime appointment.

As Trump sits in the White House, a politically polarizing confirmation could set American justice back for decades. The nomination of Brett Kavanaugh is an insult to the agonizingly slow progress of Justice that has been accomplished over the last 242 years!

The Democratic party has the numbers to block this appointment, but do they have the will? It is frightful to think that there is a real possibility that Democrats could be responsible for ANOTHER conservative appointment.

Let's show our community that there is real local opposition to Brett Kavanugh's appointment!

From Unite for Justice:

On August 26, all across the country, Americans will stand united in commitment to our freedom and our future to demand that the U.S. Senate stop Judge Brett Kavanaugh’s nomination for a lifelong appointment to the Supreme Court.

In Brett Kavanaugh, Donald Trump chose a nominee who not only has extremist, ultra-conservative legal views on a range of issues, but who has repeatedly argued that the Supreme Court should put the president above the law. Donald Trump is at the center of a criminal investigation, and he should not be allowed to pick his own judge and jury.

Senators in all fifty states must listen to their constituents, do their jobs to uphold the will of the people, protect the soul of our country and Constitution, and block this nomination. United, we will fight to ensure Brett Kavanaugh never gets confirmed by the Senate.

https://uniteforjustice2018.com/
END_OF_DOCUMENT_TOKEN_TO_BE_REPLACED
Added to the calendar on Thu, Aug 16, 2018 9:04AM
Add Your Comments
Support Independent Media
We are 100% volunteer and depend on your participation to sustain our efforts!