Lance Canales and the Flood Featured at CVPPAC Fall Fund-Raiser 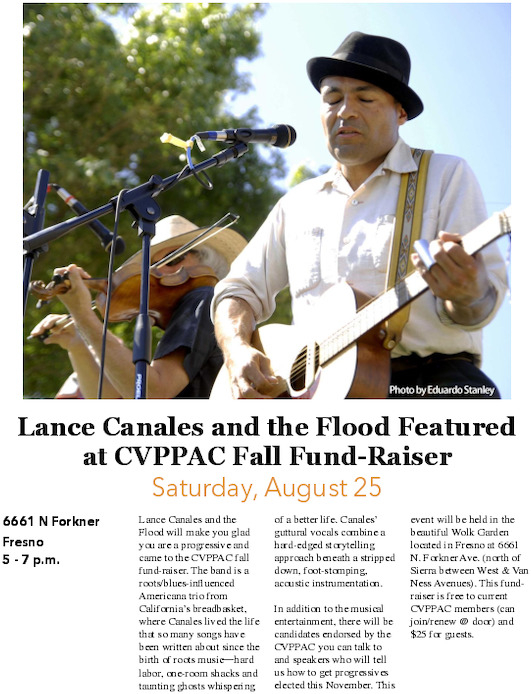 Import event into your personal calendar
Date:
Saturday, August 25, 2018
Time:
5:00 PM - 5:00 PM
Event Type:
Concert/Show
Organizer/Author:
Mike Rhodes
Email:
mikerhodes [at] comcast.net
Phone:
(559) 978-4502
Location Details:
This event will be held at Pat Wolk’s house, located at 6661 N. Forkner Ave. in Fresno on Saturday, Aug. 25, starting at 5 p.m.
Lance Canales and the Flood will make you glad you are a progressive and came to the CVPPAC fall fund-raiser. The band is a roots/blues-influenced Americana trio from California’s breadbasket, where Canales lived the life that so many songs have been written about since the birth of roots music⎯hard labor, one-room shacks and taunting ghosts whispering of a better life. Canales’ guttural vocals combine a hard-edged storytelling approach beneath a stripped down, foot-stomping, acoustic instrumentation.

In addition to the musical entertainment, there will be candidates endorsed by the CVPPAC you can talk to and speakers who will tell us how to get progressives elected this November. This event will be held at Pat Wolk’s house, located at 6661 N. Forkner Ave. in Fresno on Saturday, Aug. 25, starting at 5 p.m. The fall fund-raiser is free to current CVPPAC members and $25 for guests.
CVPPAC President Pam Whalen says that “in the past I have heard people say this is the most important election of our lives. This year that is not the case. This year is life or death. The consequences of continued Republican rule are too dire to imagine. We must act!”

The fall fund-raiser is an annual event to raise money and build momentum toward supporting progressive candidates. Whalen, speaking about the event, says that “fortunately, we can act together through the CVPPAC. We can come together, learn about local candidates and help the right people get elected. Join us on Aug. 25 and be part of the team to resist, fight back and win. Hope to see you there.”

Speakers will include Melissa Hurtado, who is a candidate for State Senate District 14 against Republican Andy Vidak. Maria Avila, Hurtado’s campaign manager will also speak. Yasmin Mendoza, who was a leader in the local March for Our Lives rally, will give us her insights into what it is like to be a young organizer in Fresno.

We are also expecting CVPPAC-endorsed candidates, elected officials and FUSD trustee candidates to be at the event, which gives everyone attending a great opportunity to talk to them directly.
We are going to win this November by supporting progressive candidates, getting out the vote and building the Central Valley Progressive PAC into a powerful force in the electoral arena. Let’s start by getting all progressives (Democrats, Independents and third-party members) to come together at this fall fund-raiser.

The only way progressives can lose this November is if we don’t get ourselves and our allies to vote. Most of the races in the Central Valley will be in districts where most voters want universal healthcare, a living wage, clean air and water and an end to the treasonous Trump/Republican administration. These are issues we can win on.

We will not allow the rich and powerful to win through voter suppression and subverting the democratic process. We will not let the billionaires manipulate the elections by showering their preferred lap dog in the race with all the money they need.

What we will do is build unity among community groups, organized labor, the poor and working people in this valley and develop a strategic plan to win power for progressives. We will give much needed resources to progressive candidates, walk precincts and make phone calls because we will not allow our community and country to be stolen by fascist and treasonous forces.
If you have had enough of Trump and the Republicans who carry out his agenda, we urge you to join the CVPPAC as we fight back. Take a minute to fill out and send in the Membership Form on this page and become a more visible, effective and active part of the resistance. If you are already a member, this is a great time to renew your membership.

Added to the calendar on Thu, Aug 9, 2018 10:28AM
Add Your Comments
Support Independent Media
We are 100% volunteer and depend on your participation to sustain our efforts!