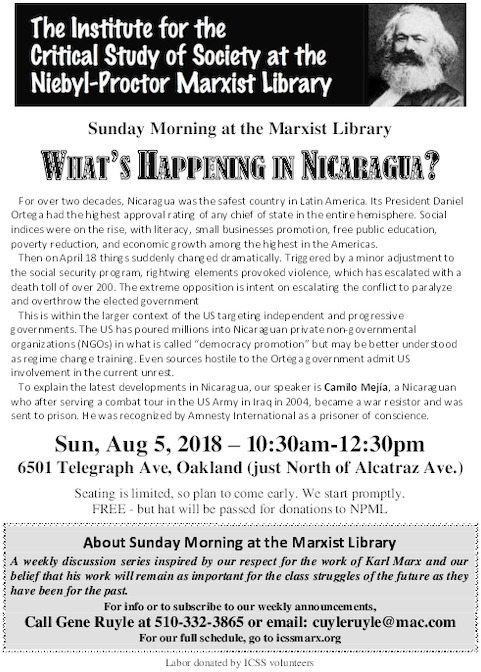 For over two decades, Nicaragua was the safest country in Latin America. Its President Daniel Ortega had the highest approval rating of any chief of state in the entire hemisphere. Social indices were on the rise, with literacy, small businesses promotion, free public education, poverty reduction, and economic growth among the highest in the Americas.  Then on April 18 things suddenly changed dramatically. Triggered by a minor adjustment to the social security program, rightwing elements provoked violence, which has escalated with a death toll of over 200. The extreme opposition is intent on escalating the conflict to paralyze and overthrow the elected government  This is within the larger context of the US targeting independent and progressive governments. The US has poured millions into Nicaraguan private non-governmental organizations (NGOs) in what is called “democracy promotion” but may be better understood as regime change training. Even sources hostile to the Ortega government admit US involvement in the current unrest.  To explain the latest developments in Nicaragua, our speaker is Camilo Mejía, a Nicaraguan who after serving a combat tour in the US Army in Iraq in 2004, became a war resistor and was sent to prison. He was recognized by Amnesty International as a prisoner of conscience.

For info or to subscribe to our weekly announcements,
Call Gene Ruyle at 510-332-3865 or email: cuyleruyle [at] mac.com
For our full schedule, go to icssmarx.org
Labor donated by ICSS volunteers

END_OF_DOCUMENT_TOKEN_TO_BE_REPLACED
Added to the calendar on Sat, Jul 28, 2018 9:35AM
Add Your Comments
Support Independent Media
We are 100% volunteer and depend on your participation to sustain our efforts!