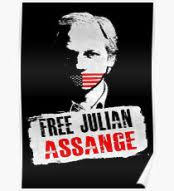 The US has been pressuring the Ecuadorian government to force the removal of Julian Assange because of the US embarrassment over the release of emails of governments and politicians. The British government has also spent millions of dollars to surround the consulate and the May government plans to arrest Assange as soon as he is pushed out of the consulate. The effort to silence Julian Assange is not just about him but silencing all journalists who release information that threatens the exposure of government corruption and crimes. The refusal of the US government to prosecute those involved in US crimes in Iraq, Libya and around the world despite the evidence of these crimes provided by WikiLeaks is further reason why the US government is so interested in arresting Assange.
Journalists are also under attack globally and the right of journalists to write and publish material about these activities is something that must be defended. The US and UK government officials are united in continuing the silencing of journalists and those who want to hold them responsible for the crimes of their governments around the world.

It is time to stand up for Assange and all journalists who are speaking truth to power.

Don’t Force Assange Out Of Ecuadorian Consulate!
Hands Off Journalists and Whistleblowers!
Prosecute the Real Criminals!

To Endorse Rally & For Further Information:
info(at)upwa.info
Added to the calendar on Sat, Jul 28, 2018 9:13AM
Add Your Comments
Support Independent Media
We are 100% volunteer and depend on your participation to sustain our efforts!