Add an Event
Newswire
Calendar
Features
Home
Donate
From the Open-Publishing Calendar
From the Open-Publishing Newswire
Indybay Feature
Publish to Newswire
Add an Event
Related Categories: U.S. | Police State & Prisons
Angola 3 Newsletter: Why Are We Not Surprised?
by International Coalition to Free the Angola 3
Friday Jul 27th, 2018 3:47 PM
We have just released the July issue of our newsletter, which spotlights Albert Woodfox's upcoming anti-solitary confinement work, the cases of Veronica Bowers, Ed Poindexter, Laverne Dejohnette, and the release of the MOVE 9's Debbie Africa. We also feature the Coalition for Prisoners' Rights Newsletter.

Why are we not surprised that children are ripped from their immigrant parents' arms?  Could it be because this has been happening for decades in U.S. jails and prisons -  not to mention, with increasing frequency as the population of women prisoners grows?

Please read the article below from the July issue of the Coalition for Prisoners' Rights Newsletter, entitled "Cries of Children Echo Thru Years." The numbers cited by the newsletter, detailing the numbers of mothers and their children affected by mass incarceration, are truly staggering.

There are also cases like Veronza Bowers, Ed Poindexter of the Omaha 2 and Laverne Dejohnette, where it seems no amount of cruel and unusual treatment seems to satisfy our criminal injustice system's thirst for extreme punishment. We hope Angola 3 supporters will read these articles, sign petitions and re-commit to furthering their efforts to change the rotten systems that are in place.

One bright spot in the midst of so much bad news is the release of  Debbie Africa of the Move 9. It was a joy to behold seeing Debbie with her son Mike Jr., who was torn from his mother following his birth in prison! We continue to push for the freedom for the remaining six of the Move 9, who have been repeatedly denied parole since they first became eligible in 2008. So much work left to be done!

For all of you who helped Malik Rahim raise funds for his taxes- here's a short video of the physical fundraiser in New Orleans. 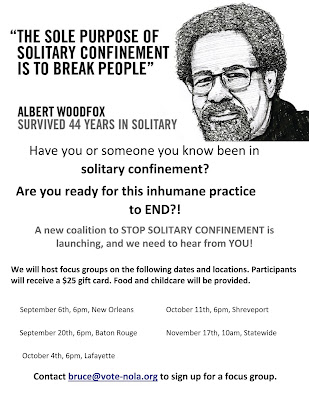 Albert has been busy with speaking engagements country-wide, but is taking September through November to work with VOTE (an acronym for "Voice of the Experienced," an organization founded in 2003 by former inmates of Angola Prison). Albert will participate in five focus groups around the state that will concentrate on strategies to reduce or eliminate the extensive use of solitary confinement in Louisiana jails and prisons. These groups will not be open to the public but are intended to develop a strategy that can be utilized by activists addressing this vital topic. VOTE is seeking participation from survivors of solitary confinement, with an online application and survey here.

Albert Woodfox spent 44 years in solitary confinement, in a 9X10 foot cell for 23 hours each day. Now, he's free and working with VOTE and other key partners to launch the Louisiana Stop Solitary Campaign. This statewide campaign will fight to end the practice of solitary confinement, and in order to win, we need to hear from people who have been directly impacted by this inhumane practice. If you have experienced solitary confinement in a Louisiana prison or jail, please register for one of our campaign planning meetings by filling out the form at this link. Planning meetings will be held:

Contact Robert (robert@vote-nola.org, 214-714-0674) or Vanessa (vspinazola@gmail.com, 504-208-0584) with questions, or if you would like the registration form emailed directly to you. Please register by August 15th to be eligible for a $25 gift card and to request child care at the meeting. Light refreshments will be provided.

Cries of Children Echo Thru Years 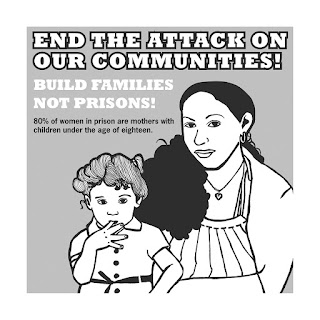 The July issue of the Coalition for Prisoners' Rights Newsletter (viewable here, or by clicking on the two images below) features several important articles, including "Cries of Children Echo Thru Years." It begins:

Family separation is a fact of life here, happening hundreds--if not thousands--of times a day. Even the New York Times has had quoted: "In the United States, we call that law enforcement." Prosecutors and police routinely separate children from their parents--when parents or children are arrested, when incarcerated women give birth, even when a pregnant woman fails a mandatory drug test, or when a child skips school. 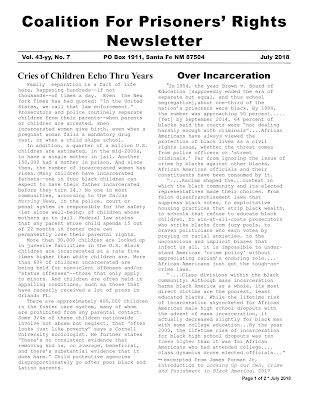 In addition, a quarter of a million U.S. children are estimated, in the mid-2000s, to have a single mother in jail. Another 150,000 had a mother in prison. And since then, the number of incarcerated women has risen. Many children have incarcerated fathers--one in four black children can expect to have their father incarcerated before they turn 14. No one in most communities, according to the Dallas Morning News, in the police, court or penal system is responsible for the safety (let alone well-being) of children whose mothers go to jail. Federal law states that any parent whose child spends 15 out of 22 months in foster care can permanently lose their parental rights... 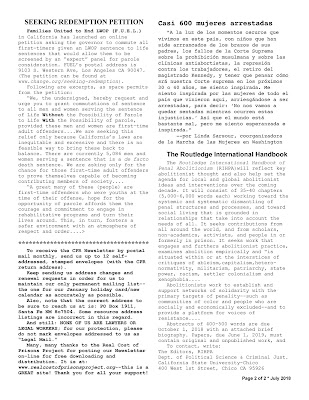 --View an archive of past newsletters here. 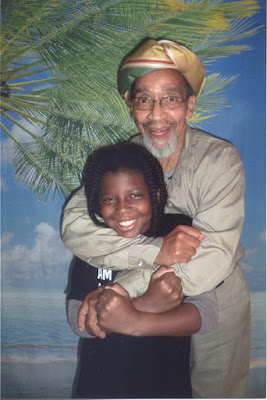 (PHOTO: Pharoah Dawson, 8, recently visited Veronza. Earlier, Dawson had written to Veronza, having heard he was sick, and commanded him: "Veronza, don't die in prison.")

In a recent article published by the SF Bay View Newspaper, author Veronza Bowers introduces himself:

Dear People, I send each and every one of you my very warmest greetings from 31 plus years deep inside the Belly of the Beast.

My name is Veronza Bowers Jr. (so named after my Father), but many people call me Daoud. I'm a former member and captain of the original Black Panther Party, and even though government officials claim there are no political prisoners in this country's prisons and jails, it's simply not true. Having already "served" over three decades in continuous custody in federal prison, I'm one of the longest held political prisoners in the US of A. There are quite a number of us scattered about, but that's a very long story.

Picture this in your mind ... if you dare: After 30 years of being denied release on parole, despite the fact that your conduct has been exemplary for over 20 years and you have long since met the criteria to be released on parole, finally your MANDATORY PAROLE RELEASE date rolls around: April 7, 2004. Everything is set...

--Read the full article and learn how to support Veronza Bowers here.

Writer Michael Richardson has been interviewed previously by Angola 3 News about his research and writing on the cases of Mondo We Langa and Ed Poindexter, known as the Omaha 2. Sadly,
Mondo We Langa died while still behind bars on March 11, 2016. Poindexter continues to assert his innocence and to fight for his freedom.

With the release of a new book and the publication of new articles, Richardson continues his work spotlighting this important case. In his recent article Why I Believe Edward Poindexter is Innocent of Murder, Richardson writes:

After a decade I finally finished the book, FRAMED: J. Edgar Hoover, COINTELPRO & the Omaha Two story, and can pursue efforts to help gain freedom for Poindexter, who I now believe innocent of the crime. Poindexter was head of Omaha's Black Panther affiliate group the National Committee to Combat Fascism and was a target of the Federal Bureau of Investigation's clandestine, and illegal, counterintelligence program code-named COINTELPRO.

My purpose in writing the book was to make a record of what happened. The story, until now, has never been told in full, in the context of its time and place. Much of the story only came out years after the murder. In writing the book I followed the advice of Mondo to follow the truth. What I came to learn is that both men were innocent and prosecuted for murder because of their political beliefs.

--More information about the Omaha Two case is archived here.

(PHOTO: Ed Poindexter with author Michael Richardson in 2016 at the Nebraska State Penitentiary.) 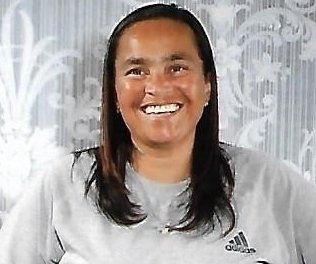 Please consider signing the Change.org petition to California Governor Jerry Brown urging him to grant a commutation to Laverne Dejohnette.

Dejohnette's petition for commutation has been reviewed and approved by the Governor's investigators. Both the Parole Board and the California Supreme Court have recommended clemency. Now the commutation is in the Governor's hands. Dejohnette reflects today:

"More people would learn from their mistakes if they weren't so busy denying them. This quote that I read in a random book has become a focal point in my rehabilitation. I now recognize the many mistakes I made early in my life. I also know that I was lost, coming from a dysfunctional home, neighborhood and community. I am accountable for the bad choices I made but I also have learned to hold others accountable for the many abuses I endured growing up. I have healed by taking full advantage of self- help opportunities, and I continue to actively participate in my rehabilitation. I have transformed my life and if given the opportunity I will live a productive life and thrive. A Life Without the Possibility of Parole (LWOP) sentence reinforces a "throw away" attitude towards human beings.  It denies that a person can grow or change." 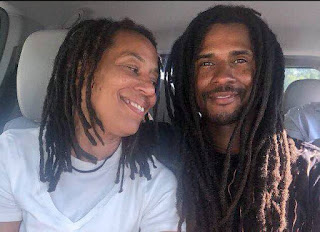 (PHOTO: Debbie Africa with her son Mike Africa Jr, on the drive home.)

The piercing, bone-deep pain for a parent from having their child forcefully snatched away by authorities is a hurt Debbie Sims Africa knows in horrific ways. The immense suffering some immigrant parents currently experience -- triggered by the child-snatching/ family separation anti-immigration policies pursued by the Trump Administration on America's southern border - is something that impacts Africa very personally.

On August 8, 1978 authorities in Philadelphia, literally snatched Africa's two-year-old daughter from her arms. A few weeks later when Africa gave birth to her son, Philadelphia authorities snatched him away also. For more than 39-years Africa could not do what she wanted to do all her life: be a lovingly embracing, nurturing and protective mother...

Africa, during a press conference following her release, said seeing the cruel separations on the southern border "brought back emotions" for her. "When I saw that immigration separation on TV, I had a familiar feeling," Africa said, sitting beside her son Michael 'Mike' Africa Jr. during that press conference. "It is totally wrong what Trump is doing. The child did nothing wrong regardless of the parent. It pulls at the heart strings."

The emotions Africa felt watching Trump's immigration enforcement practices palled in comparison to the emotions she felt arising from the reality that she had to leave her MOVE colleagues in prison, including the two surviving MOVE women who shared a prison cell with her. "I was happy to go home but hurt that they are still in prison," Debbie Africa said, describing how her MOVE member cellmates, Janine and Janet, helped her pack to leave prison. One of the still imprisoned MOVE 9 men is Debbie's husband, Michael.

--Learn more about the movement to support parole for the six members of the MOVE 9 that remain imprisoned, here. 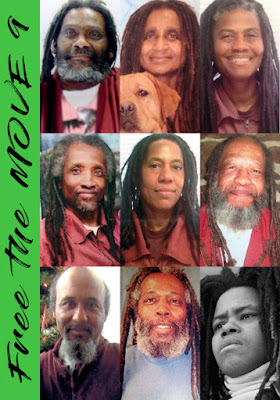