Don Notolli, Delta Counties Coalition Chair and Sacramento County Supervisor, spoke on his strong opposition to the construction of Governor Jerry Brown’s Delta Tunnels during the public comment period at the first board meeting of the Delta Conveyance Design and Construction Joint Powers Authority on Thursday, May 17 in Sacramento. Photo by Dan Bacher. 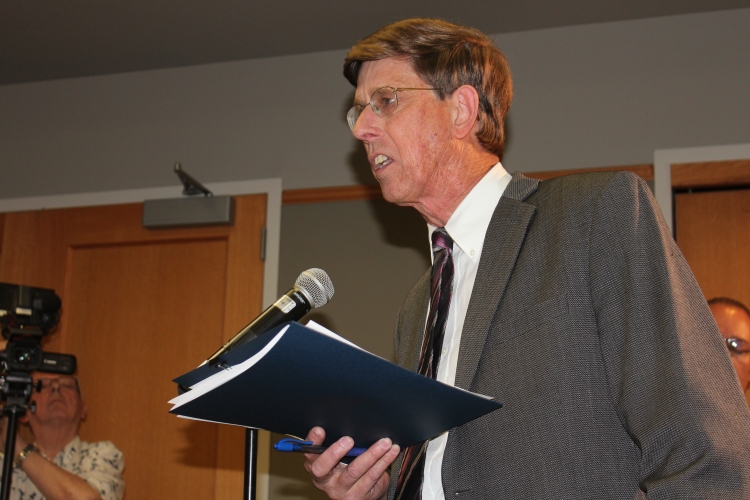 As California Governor Jerry Brown nears the end of his fourth term, his administration continues to march full-speed ahead on trying to lay all of the groundwork necessary to build his Delta Tunnels project before he leaves office in January 2019

In response to a state legislative informational hearing regarding the extension of State Water Project (SWP) contracts requested by the Department of Water Resources (DWR), the Delta Counties Coalition (DCC) on July 3 called on the Legislature to halt funding a DWR contract for financing the construction of Governor Brown’s Delta Tunnels project, AKA the California WaterFix.

DWR is the lead state agency promoting the California WaterFix. The Coalition called the contract extension a pretext for the Delta Tunnels financing.

"There is little question that DWR is calling for this contract extension as a pretext for California WaterFix, which is estimated to cost SWP contractors tens of billions of dollars in the coming decades,” Don Nottoli, DCC Chair and Sacramento County Supervisor, said in a statement. “DWR wants to characterize this as a routine course of doing business. It is not.”

"As Delta area leaders, we request that the Legislature demand accountability and transparency from DWR before even considering their request. DWR is legally obligated to provide important information (required by Section 147 of the Water Code) that will shed light on this process, which right now is veiled in secrecy. As a part of today’s hearing, we ask that legislators require that all legally obligated information be forwarded to the appropriate legislators and their staffs without delay,” said Notolli.

"The consequences of legislative rubberstamping of these contracts would be harmful for generations of Californians. That is why major statewide environmental groups, Delta businesses and residents, and elected officials oppose this underhanded attempt to subvert the process. We respectfully ask legislators to apply the strictest oversight possible over DWR’s requested action,” he concluded.

“On behalf of the ratepayers and taxpayers represented by the undersigned, we write to request greater transparency and reliable answers regarding the impacts of proposed State Water Project (SWP) Contract amendments, including the proposed 50-year SWP Contract Extension amendments and other as-yet-unspecified Delta Tunnels (California Water Fix) Contract amendments. At present, the proposed amendments are poorly defined and explained and have potential adverse impacts far beyond their apparent scope. We urge your Committee to request that the Joint Legislative Budget Committee not schedule its hearing on the SWP Extension Contract Amendments while major questions noted below remain unanswered,” they wrote.

• DWR has not completed CEQA requirements;
• The amendment would obligate taxpayers and ratepayers without a vote;
• Basic planning and financial feasibility analyses required by California and federal
engineering guidelines are not provided; and
• There is no viable plan for financing the Delta tunnels project.

The letter concludes, “The choice is clear: investment in local and sustainable real water supplies, or increasingly unreliable and costly paper water promises from the State Water Project. The latter, in the long run, will prove excessively expensive, unsustainable and unlawful. County and local leverage and independence needs to be preserved, so that the choice remains in our hands where it belongs.”

Additional information supporting the above letter are available in this memo: RBM Letter Re SWP contract extension hg

In other Delta Tunnels news, a California Public Record Acts (CPRA) request by Restore the Delta reveals that the Metropolitan Water District and other water agencies are complicit in Congressman Ken Calvert’s rider banning judicial review of Delta Tunnels lawsuits. While Senators Dianne Feinstein and Kamala Harris are officially opposing the dangerous rider, Governor Jerry Brown, Attorney General Xavier Becerrra and Department of Water Resources officials have been silent on the rider.

“He (JerryBrown) is holding a climate change conference in September to cement his legacy as an environmentalist,” said Barbara Barrigan-Parrilla, Executive Director of Restore the Delta. “Yet, he allows California WaterFix to drag on, without demanding environmental and economic veracity, and allowing the sacrifice of due process rights for Delta communities, judicial review, and the rule of law. He is poised to sacrifice his moral principles just so he can build his tunnels.”

The documents contained in a Public Records Act Request (PRA) from the Metropolitan Water District of Southern California (MWD or Metropolitan) that indicate respective staff members from MWD, Kern County Water Authority (KCWA), and the Santa Clara Valley Water District (SCWVD) reviewed the extent to which the House Appropriations spending bill met their previously planned needs for the CA WaterFix project, including the Calvert rider—a legislative provision that would ban further judicial review of the Delta tunnels project.

In addition, some documents confirm that MWD and Municipal Water District of Orange County (MWDOC) board director Brett Barbre worked behind the scenes to pursue the passage of the Calvert rider despite MWD General Manager Jeff Kightlinger’s best efforts to distance MWD from any political backlash associated with the Calvert Rider.

For more information, go to: http://www.dailykos.com/...

The California WaterFix consists of two massive  35-mile long tunnels that would divert Sacramento River water to the South Delta pumping facilities to be diverted to agribusiness interests on the West Side of the San Joaquin Valley, Southern California water agencies and oil companies conducting fracking and other extreme oil extraction methods.

The construction of the tunnels would hasten the extinction of winter and spring-run Chinook salmon, Central Valley steelhead, Delta and longfin smelt, green sturgeon and other fish species. The project would also imperil the salmon and steelhead populations on the Trinity and Klamath rivers.

The Next Step to Stop the Calvert Rider? Get Governor Brown and the Department of Water Resources to Stand Up for Due Process

Your calls, tweets, and emails encouraged Senator Feinstein and Senator Harris to voice their opposition to the Interior spending bill rider that seeks to end our legal fight to protect the Delta from the CA WaterFix debacle.

Now its time to ask the father of the tunnels, Governor Jerry Brown, what he supports more—his pet project, or the preservation of the rule of law, the right to representation, and due process.

When contacting the Governor, please remember to be respectful. In this instance, we are more likely to be heard when speak from a calm, collected place of concern, rather than a place of hatred and contempt.

“Hello, my name is ________, and I live in _____, CA. I am calling today to express my disappointment that Governor Brown has remained silent about the Interior spending bill rider that seeks to ban all litigation on the CA WaterFix project. Congressman Calvert’s rider in addition to Representative Valadao’s rider that would exempt litigation for the State Water Project and Central Valley Project are flagrant attempts to undo due process and proper representation for Delta communities.

Why is California’s “Green Governor” capitulating with anti-environmental House Republicans to secure a project that he claims will improve conditions for fish, restore the Delta, and help the state sustain water supplies as the impacts of climate change intensify? Moreover, if Governor Brown champions himself as an ethically conscious leader motivated by social justice, why are environmental justice communities in the Delta not given the same consideration?

I urge the Governor to stand up against these destructive riders and to prioritize the rule of law and due process over his tunnels project. Thank you for your time and consideration.”