Import event into your personal calendar
Date:
Thursday, July 05, 2018
Time:
7:00 PM - 9:00 PM
Event Type:
Vigil/Ritual
Organizer/Author:
Samara Hayley Steele
Email:
solidaridadconlosninos [at] gmail.com
Phone:
2136630807
Location Details:
Where: The New School Preschool, 1606 Bonita Ave in Berkeley What: To discuss & prepare for the caravan leaving on Sunday July 15th
We stand in solidarity with the kids who have been imprisoned and interned due to their immigration status.

We are women and women's accomplices who have been meeting in backyards, around kitchen tables, and in preschools after-hours in the East Bay to share ideas and our compassion for the kids who have been interned.

One of the ideas we came up with was to start a regular caravan where we travel together to the kids' internment camps and related sites. Our goal is to peacefully bring comfort to the children through song, and by bringing toys, books, and notes of solidarity to them. Our goal is to make sure they know we care. We are also interested in visiting sites related to the kids internment, so to see these spots with our own eyes and to grow our collective knowledge.

Join us this Thursday, July 5th to discuss the next caravan, which will depart on Sunday July 15th form BFUU (1924 Cedar) in Berkeley at around 1pm. We will also be emotionally unpacking the last caravan, which occurred on July 1st.

During the July 1st caravan, two of us were arrested while attempting to deliver toys at the BCFS facility in Fairfield, CA, where according to Sacramento Channel 13 News, at least a dozen of the kids recently separated from their parents are still being held.

Our group includes many mothers and grandmothers, and also those who consider themselves grandmothers' accomplices. Here is some video footage of when Liz, a grandmother of four, was arrested while attempting to deliver toys to the kids being held in Fairfield on Sunday: https://www.facebook.com/groups/206619903305706/permalink/215834722384224/

Our next caravan will likely be to a different facility and probably won't include arrests. We weren't planning for the arrests on Sunday though, so maybe this is something we should start thinking about more intentionally. Anyway, let's talk about this at the meeting on Thursday!

We are not an official organization, just women and womens’ accomplices organizing to bring comfort to these kids and get them out of the internment camps, stop the internments, and also get the kids who have been separated back with their families as soon as possible.

We are omni-partisan. Anyone can stand in solidarity with the kids.

END_OF_DOCUMENT_TOKEN_TO_BE_REPLACED
Added to the calendar on Tue, Jul 3, 2018 9:25AM
§A note written by a Berkeley child to the kids who have been interned
by Samara Hayley Steele 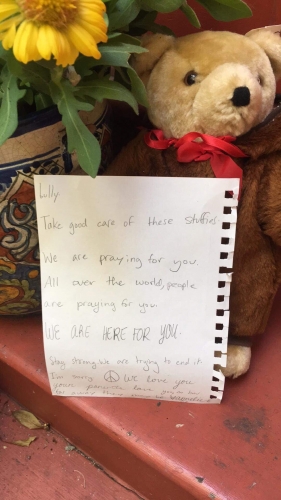 original image (1080x1920)
END_OF_DOCUMENT_TOKEN_TO_BE_REPLACED
Add Your Comments
Support Independent Media
We are 100% volunteer and depend on your participation to sustain our efforts!