Protest to Demand: The Trump/Pence Regime Must GO! 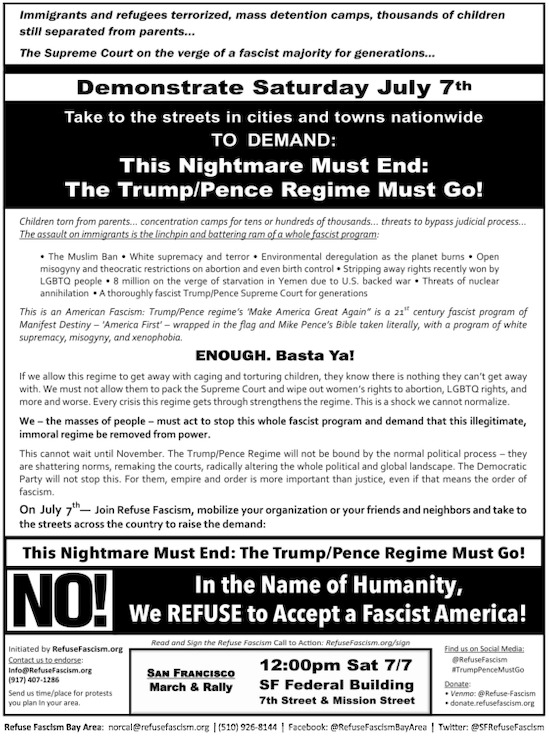 
DEMONSTRATE SATURDAY JULY 7th! Take to the streets in cities and towns nationwide TO DEMAND: This Nightmare Must End: The Trump/Pence Regime Must Go!


Children torn from parents… concentration camps for tens or hundreds of thousands… threats to bypass judicial process… The assault on immigrants is the linchpin and battering ram of a whole fascist program:


* The Muslim Ban * White supremacy and terror * Environmental deregulation as the planet burns * Open misogyny and theocratic restrictions on abortion and even birth control * Stripping away rights recently won by LGBTQ people * 8 million on the verge of starvation in Yemen due to U.S. backed war * Threats of nuclear annihilation * A thoroughly fascist Trump/Pence Supreme Court for generations *

This is an American Fascism: “Trump/Pence regime’s ‘Make America Great Again’ is a 21st century fascist program of Manifest Destiny – ‘America First’ – wrapped in the flag and Mike Pence’s Bible taken literally, with a program of white supremacy, misogyny, and xenophobia.”

We know enough to see what has been put into motion. If we allow them to get away with caging and torturing children, they know there is nothing they can’t get away with.We must not allow them to pack the Supreme Court and wipe out women’s right to abortion, LGBTQ rights, and more and worse. Every crisis this regime gets through strengthens the regime. This is a shock we cannot normalize


We – the masses of people – must act to stop this whole fascist program and demand that this illegitimate, immoral regime be removed from power.


This cannot wait until November. The Trump/Pence Regime will not be bound by the normal political process – they are shattering norms, remaking the courts, radically altering the whole political and global landscape. The Democratic Party will not stop this. For them, empire and order is more important than justice, even if that means the order of fascism.


On July 7: Join Refuse Fascism, mobilize your organization or your friends and neighbors and take to the streets across the country to raise the demand: This Nightmare Must End: The Trump/Pence Regime Must Go!


In the Name of Humanity, We REFUSE to Accept a Fascist America!

SAN FRANCISCO: The march will begin with a short rally at SF Federal Building, 12pm. To sign up and for more information, visit us on Facebook (@RefuseFascismBayArea) or Twitter (@SFRefuseFascism)

END_OF_DOCUMENT_TOKEN_TO_BE_REPLACED
Added to the calendar on Mon, Jul 2, 2018 9:10PM
Add Your Comments
Support Independent Media
We are 100% volunteer and depend on your participation to sustain our efforts!