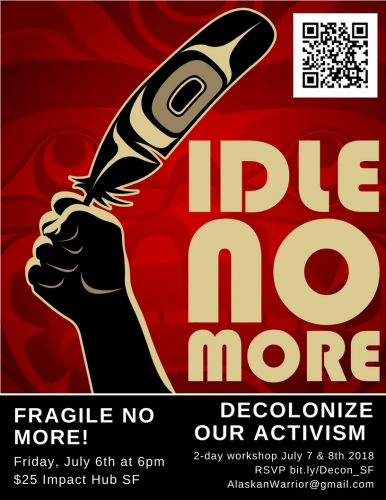 
Idle No More ~ History of Colonization
This is a workshop about 500 years of indigenous resistance that began in 1452. With a Native American perspective and incorporating traditional teachings and stories, and how the Doctrine of Discovery was the foundation for the historic colonization, genocide, relocation, termination, forced assimilation of Native Americans.

Idle No More ~ Healing Historical Trauma
To heal from historical trauma, you must first understand how colonization has impacted indigenous people. By acknowledging our collective past and focusing on the present healing often leads participants to become aware of historical barriers that can be effectively removed in a safe and comfortable environment.

Idle No More ~ Spiritual Activism
This workshop delves into the Natives connection with the land, environment, and Spirit. Explore how to incorporate ‘Spirit’ into the activism you do. Discuss how to start organizing nonviolent direct actions that are Spirit-led instead of ego/mind-led.

Idle No More ~ The 7th Fire
Explore how working with Natives toward common goals of social and environmental justice involves letting go of unconscious racism and privilege. Learn what it means to be a good ally, and how that taking the lead from indigenous activists and community leaders will benefit us all.
END_OF_DOCUMENT_TOKEN_TO_BE_REPLACED
Added to the calendar on Sat, Jun 30, 2018 6:44PM
§Sweetwater Nannauck (Tlingit, Haida, Tsimshian) Director of Idle No More Washington
by David Michael 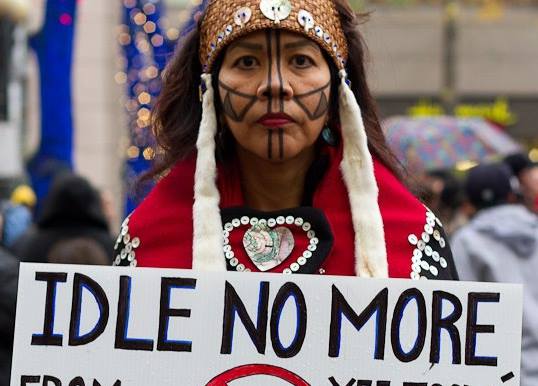 Sweetwater is an Idle No More activist that advocates for the protection of the fragile environment of the Northwest Coast, for tribal sovereignty rights, and the traditional way of life of Native people. She conducts Idle No More 'Decolonizing Our Activism' workshops in a respectful way that is both healing and empowering.


November 10, 2017 is the 5th anniversary of Idle No More. Since then Idle No More Washington has had over 90 events, workshops and nonviolent direct actions that address local and global issues. She went to Washington, DC to lobby to protect the Arctic, she was involved in the 'Shell No' actions in Seattle and Anchorage when President Obama was there. She helped organize ‘The Paddle to Standing Rock’ in September 2016, and was featured in the annual Seattle Weekly ‘Best of Seattle’ (2015) ‘Best Activism Idea’.

END_OF_DOCUMENT_TOKEN_TO_BE_REPLACED
Add Your Comments
Support Independent Media
We are 100% volunteer and depend on your participation to sustain our efforts!