by Dave Id
The city of Oakland's strategy for which homeless encampments it chooses to target and when is secretive. Encampment management meetings are held on Fridays and neither unsheltered folks nor homeless advocates are allowed to attend, despite repeated requests by the Homeless Advocacy Working Group over the past year. Differing excuses are offered for evictions from one to the next, and the rationales offered appear ad hoc and can conflict with one another. Sometimes people are evicted from one spot but allowed to simply move across the street. What is clear is that there is no comprehensive city plan in regards to evictions, where people should go, outreach, or services. This month, after the city "closed" the largest encampment at Northgate, its sights were set on those living in Union Point Park. The city and those tied to the adjacent marina continue to harass and threaten folks at Union Point. 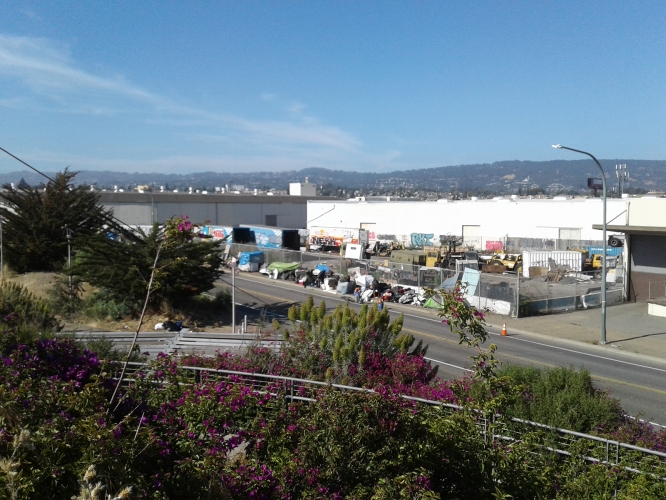 original image (1600x1200)
[Unhoused folks squeezed onto narrow strip of land on Embarcadero a day after being evicted. Photo by Nino Parker.]


Union Point Park is a 6-acre city park on the waterfront at 2311 Embarcadero between Union Point Marina and a small industrial area west of the I-880 freeway which includes the Alameda County Household Hazardous Waste Collection Facility. Opening in 2005, the park was created on what was one of Oakland's many brownfields, this one polluted with lead, arsenic, and other toxic substances. A small hill or mound in the park with a spiral walkway to the top was created with contaminated soil from the site.

Prior to evicting residents of Union Point Park, Operation Dignity posted confusing notices around the park on behalf of the city. One area was marked for a temporary "clean and clear," while other sections were posted with eviction notices. Such uncertainty creates undue stress on residents, several of whom at this location are disabled to varying degrees, at least one requiring a wheelchair and another cerebral palsy canes for mobility.

On June 13, the city evicted most of those living in Union Point Park, pushing residents out onto an extremely narrow strip of land on the edge of the the dangerously fast-moving Embarcadero thoroughfare, within inches of cars and heavy industrial trucks going 50mph or more. While the city absolves itself of responsibility for the danger some Union Point folks now face — as if there is anywhere else nearby they can reasonably move their tents and possessions — the city cited safety as one of the reasons for evicting folks from the large Northgate encampment.

At Union Point, the reason behind the eviction is most likely complaint-driven, the squeaky wheel getting the grease, such as when the city evicted an encampment on West Grand Avenue in August 2017 after the Veterans Administration demanded the sidewalks outside of their property be cleared of people and tents. Likewise, Union Point Marina harbor master Brock de Lappe regularly stalks, harasses, and insults unhoused folks in the park, residents say. He patrols the park, taking close-up photographs of residents and their possessions. When confronted, it's not uncommon for de Lappe to verbally assault park residents, blaming them for their lack of housing and declaring they have no right to be there, as if he owns or controls the city park. Undoubtedly, persistent complaints and photos from de Lappe to the city of Oakland contributed to the decision to "close" the park to homeless folks, "close" being the city's euphemism for encampment evictions.

While many residents of the park, especially those who have lived there for years, admit that a more troublesome group of unhoused folks had broken into marina showers and caused other problems, including one who hoarded piles of useless items only to abandon the piles later, they say it's not fair of the city to collectively punish everyone who lives in the park by evicting them all. Those who were causing the most friction are gone now, but the city doesn't care. The city doesn't distinguish between the differing populations of unhoused folks, some more stable than others, some more desperately in need of public services they are not receiving.

With nowhere else nearby to go, some residents have intermittently moved back into the park, only to be threatened with arrest for returning, although police have yet to follow through with that threat. At least one person was cited by Oakland police for California Penal Code 647(e), lodging in a place without permission of the owner. The cop who cited the man told him that if he kept his things neat, he would "be fine." Apparently, it was another, more tidy person in a nearby tent who called the police on him.

On the morning of June 19, when advocates gathered to support residents who, after returning to the park, were threatened by police with arrest the night before, a resident of the marina pulled a large knife on one of the unhoused folks in the park. Shortly thereafter, the same man from the marina drove his SUV through the middle of the park, stopping in front of a group of advocates and unhoused folks, pulling the knife out again and threatening to kill everyone present. The man admitted he had been drinking and claimed he had gotten a bad night's sleep before driving off.

One thing oppositional marina residents don't appear to recognize, in their quest to have the park cleared of unsheltered folks in order to more or less claim the city park for themselves, is that one day in the not too distant future, gentrification will come here, too, and the city or corporations may come after the people living in their boats. The huge new Brooklyn Basin is under construction just up the street, with the first phase expected to be completed later this year or in early 2019. That one development project alone and the newcomers it will attract are expected to begin an irreversible process of remaking this entire area of the Oakland waterfront. Industrial warehouses will be replaced with condominium towers. Other more wealthy folks might start eyeing the marina for themselves. Busy bodies might object to people living in somewhat dilapidated boats on their doorstep.

Currently, out of the thirty or so people who resided in and around the park at the time of the June 13 eviction, perhaps eleven remain, some of whom were already at the very north end of the park that the city left untouched and a few who joined them after the eviction. Some who were able filtered into the surrounding neighborhoods. Others are toughing it out on the tiny strip of land on Embarcadero, or bouncing back and forth from Embarcadero to the park. A few moved up to encampments around Lake Merritt.

Union Point Park folks continue to receive conflicting information, adding stress to their already difficult lives. Councilman Noel Gallo has told those on the northern tip of the park that the city will leave them alone, but police have said they will be evicted by the middle of July.
§Union Point Park, looking northward from the top of spiral hill
by Dave Id 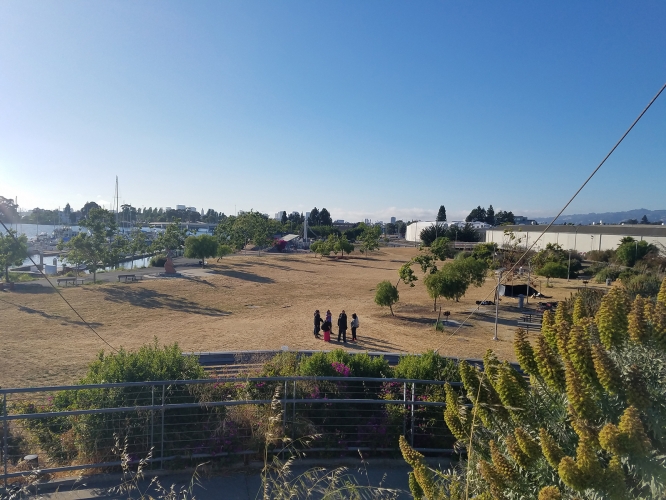 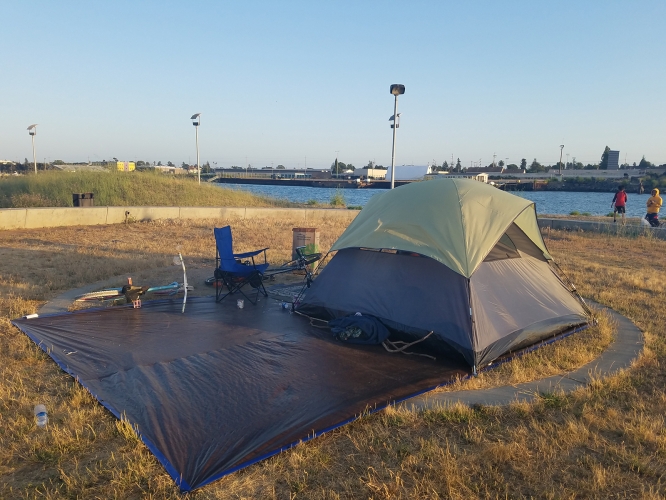 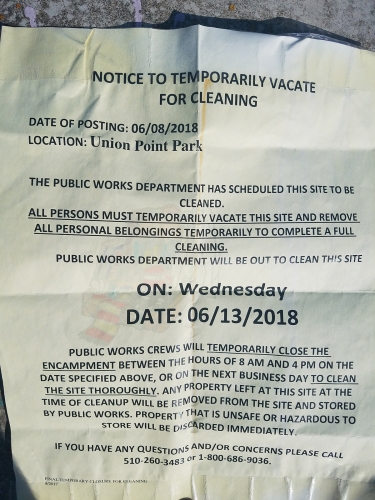 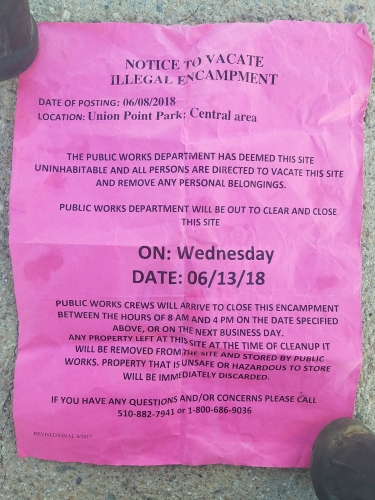 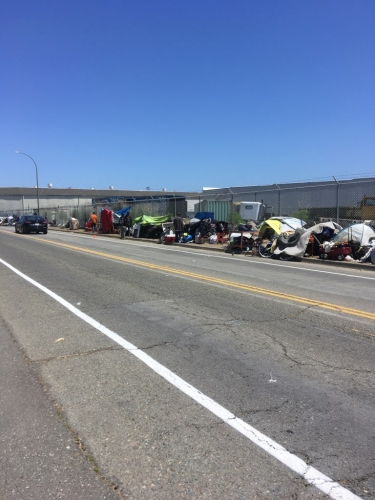 original image (768x1024)
Photo by Angela.
§Cars and heavy industrial trucks whip by all day and night
by Dave Id 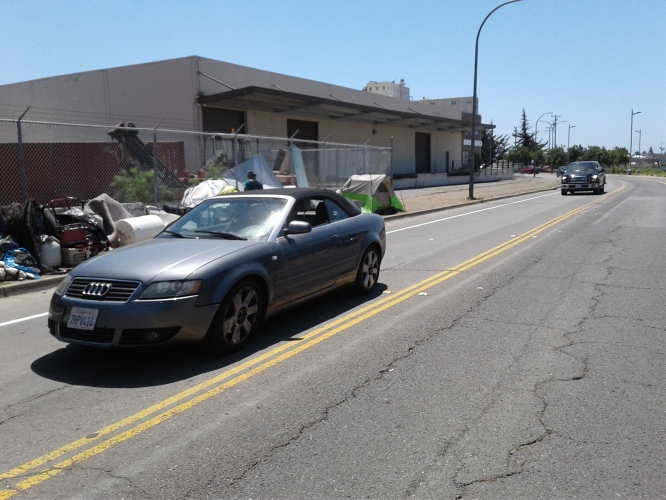 §Curb dwellers set up cones for safety, but dump truck deliberately drove through them all
by Dave Id 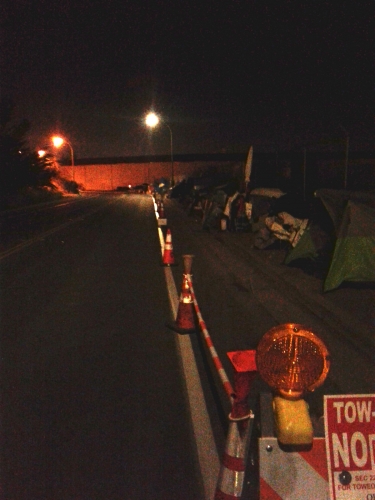 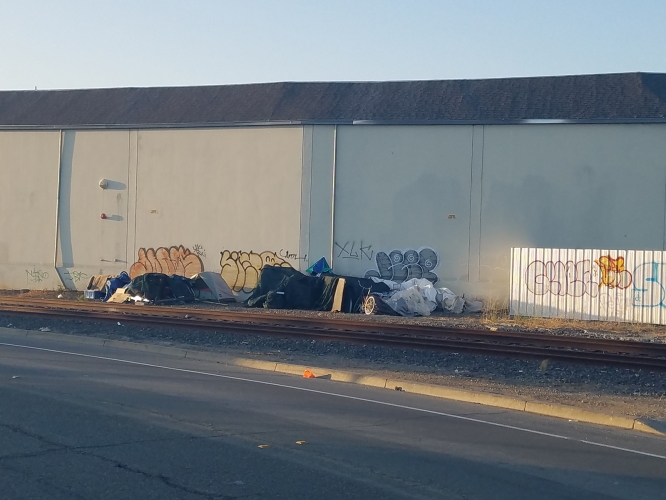 original image (1600x1200)
The only way in or out of this location is to cross the railroad tracks.
§City does not service park nor even provide garbage receptacles
by Dave Id 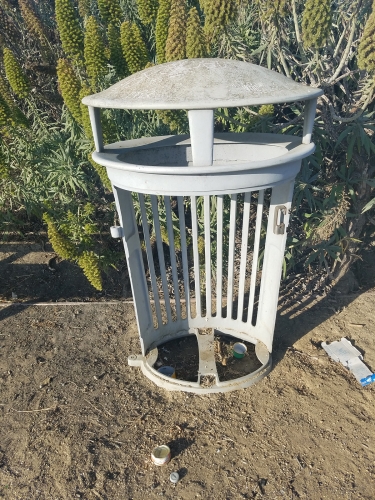 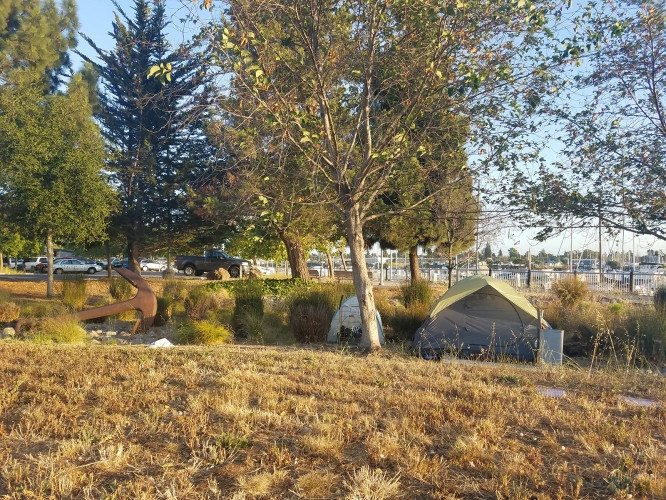 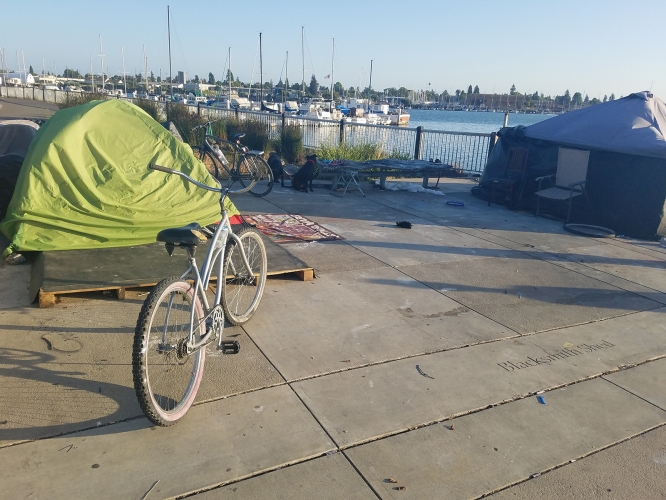 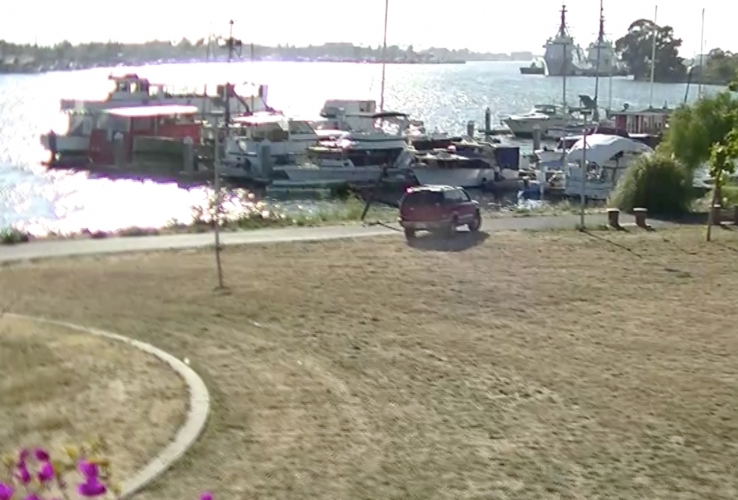 original image (1600x1083)
§Citation for violation of PC 647(e), lodging without permission of the owner
by Dave Id 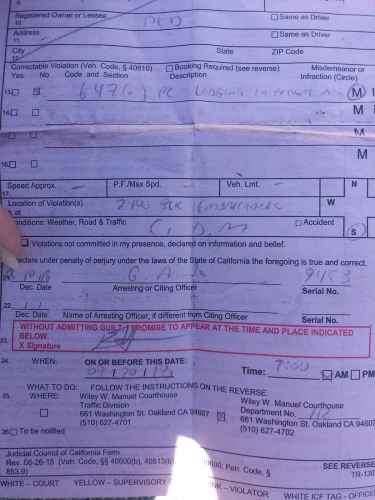 original image (1600x565)
Add Your Comments
Support Independent Media
We are 100% volunteer and depend on your participation to sustain our efforts!