William Blake, The American Revolution And The Idea Of Freedom 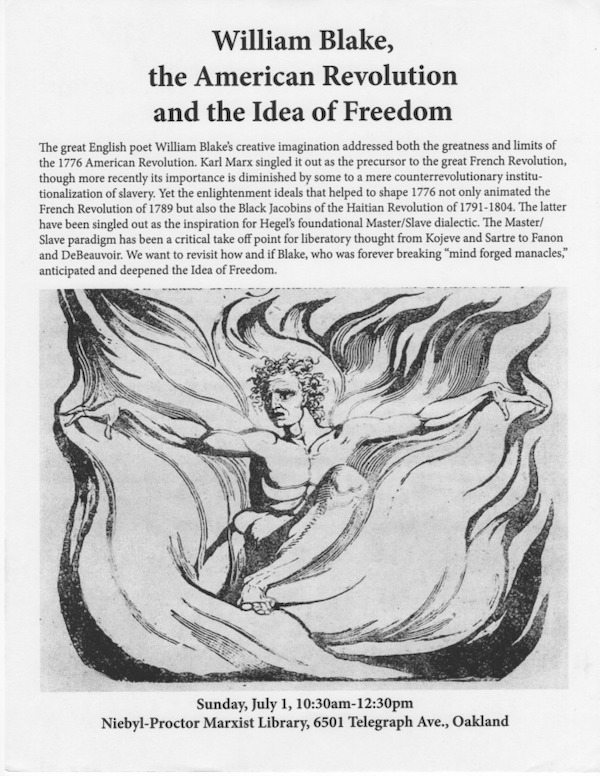 HOW TO CELEBRATE JULY 4TH: WILLIAM BLAKE, THE AMERICAN REVOLUTION AND THE IDEA OF FREEDOM

The great English poet William Blake's creative imagination addressed both the greatness and limits of the 1776 American Revolution. Karl Marx singled it out in Capital as the precursor to the great French Revolution, though more recently its importance is diminished by some to a mere counterrevolutionary institutionalization of slavery. Yet the enlightenment ideals that helped to shape 1776 not only animated the French Revolution of 1789 but also the Black Jacobins of the Haitian Revolution of 1791-1804. The latter have been singled out as the inspiration for Hegel's foundational Master/Slave dialectic. The Master/Slave paradigm has been a critical take off point for liberatory thought from Kojeve and Sartre to Fanon and DeBeauvoir. We want to revisit how and if Blake, who was forever breaking "mind forged manacles," anticipated and deepened in the Idea of freedom in Hegel and Marx.
Discussion by Lew Finzel and Ron Kelch

For info or to subscribe to our weekly announcements,
Call Gene Ruyle at 510-332-3865 or email: cuyleruyle [at] mac.com
For our full schedule, go to icssmarx.org
Labor donated by ICSS volunteers
END_OF_DOCUMENT_TOKEN_TO_BE_REPLACED
Added to the calendar on Mon, Jun 25, 2018 6:08AM
Add Your Comments
Support Independent Media
We are 100% volunteer and depend on your participation to sustain our efforts!