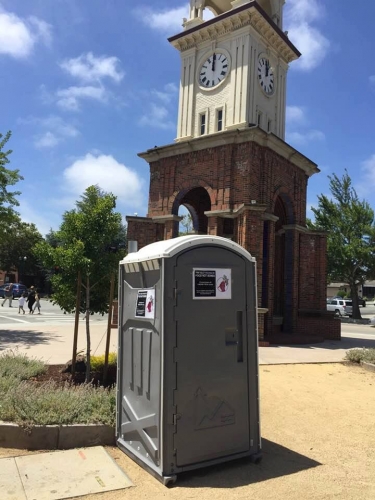 original image (720x960)
City leaders often claim they must pass laws and implement policies against those who are forced to live outside because of public defecation and urination. The Downtown Post Office erected a chain linked fence in response claiming people were relieving themselves near the building. The city has also closed or restricted access to most of the toilets used by those who cannot afford housing.

Santa Cruz Parks and Recreation interim Director, Carol Scurich told supporters of the public toilet that she would consider opening existing toilets and may provide some in the future. She claims she did not understand what we were saying when we told her that we had already provided a toilet at the corner of Water and Front Streets.

When Parks and Recreation supervisor, Meta Rhodeos ordered the toilet be removed from the Town Clock we moved it to the Post Office. The Postmaster supports the placement of a toilet but says it cannot be placed on Federal Property. Other establishments in the area also told us they supported the placement of toilets at the Water Street end of Front Street.

Food Not Bombs hopes the City of Santa Cruz will provide toilets before Independence Day. The Santa Cruz City Council’s report on homelessness claims that local taxpayers spend $14 million a year on police resources to move or arrest those without housing. It is clear that the city can afford to provide sanitary toilet facilities.

If the city is unwilling to provide sufficient access to toilets Food Not Bombs will provide them.
Add Your Comments

§Multi-step plan to further criminalize poverty
by fight back
Tuesday Jun 19th, 2018 4:40 PM
Proof once again what kind of people are running Santa Cruz these days.

1) Deny the poor people basic human right to relieve themselves (which is of course a biological necessity, not a choice), forcing them to do so on the ground.
2) Arrest them for fulfilling a biological necessity in the absence of proper facilities, plus drum up support for more anti-homeless legislation using the "public defecation/urination" problem (like they did with drugs/needles, personal belongings left outdoors, etc...).
3) Profit. Always... profit. 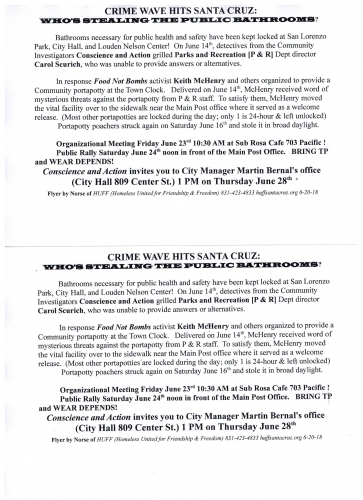 original image (1700x2338)
Conscience and Action voted today to continue the campaign to cleanse the cranky colon of the City's constipated constables. See flyer below.
Add a Comment
§Whoops...The Public Rally is Saturday, but it's June 23rd not June 24th.
by Robert Norse
Friday Jun 22nd, 2018 10:08 AM
The days on the flyer "Crime Wave Hits Santa Cruz: Who's Stealing the Public Bathrooms" posted under the "Further Protests Comment..' above are correct, but "Public Rally Saturday June 23rd noon..." should read "Public Rally Saturday JUNE 23RD noon...".

Apologies for my error there. Beware of writing flyers on the fly.