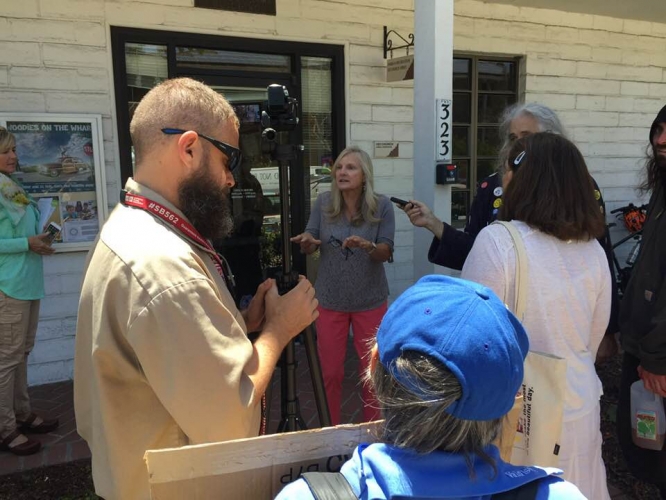 original image (960x720)
A speak out and rally was held on Thursday, June 14 at noon protesting the closure by Santa Cruz Parks and Recreation Department of bathrooms at San Lorenzo Park and Louden Nelson Community Center. The action, attended by 23-30 concerned citizens, began at City Hall and moved to the Park and Rec offices on Church Street. The protest sponsored by Conscience and Action, a coalition of local activist groups including Santa Cruz Food Not Bombs, Santa Cruz Homeless Depot, Homeless United for Friendship and Freedom (HUFF) and the Poor Peoples Campaign, was the first of what is planned to be a series of actions to bring community awareness and concerns about these closures which occurred without consulting the public and which seem to be targeting the houseless community. The action was covered by local television and press which photographed the event as well as recording interviews with Conscience and Action co-founder Rabbi Phil Posner among others.

Among the questions being asked by the group are: Does the city really want people to use the streets to relieve themselves and what right does Park and Recreation have to deny individuals, especially those who have no home to call their own, the right to basic human dignity? Interim Parks and Recreation Director Carol Scurich answered questions asked by the group as it gathered outside the offices of Park and Rec. Also, as part of the effort to highlight the lack of public restrooms in Santa Cruz, International Food Not Bombs Co-Founder Keith McHenry has provided a porta-potty for public use at the Clock Tower, across Water Street from the site of the weekly Food Not Bombs Saturday and Sunday meals. It is hoped that future demonstrations will prompt both the City of Santa Cruz and county officials to revisit the issue of providing basic dignity to all the residents of our community, regardless of social or economic standing.