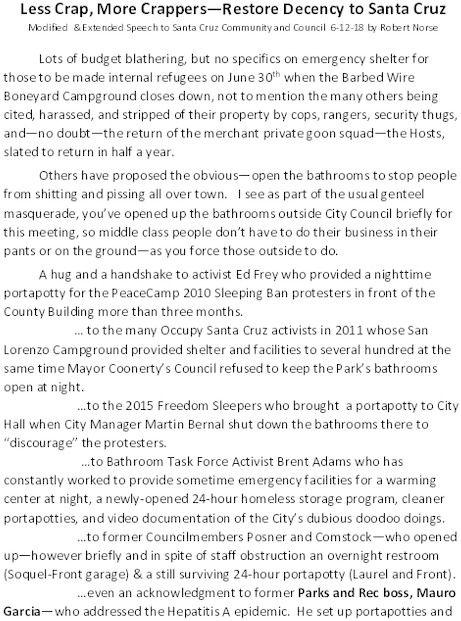 Lots of budget blathering, but no specifics on emergency shelter for those to be made internal refugees on June 30th when the Barbed Wire Boneyard Campground closes down, not to mention the many others being cited, harassed, and stripped of their property by cops, rangers, security thugs, and—no doubt—the return of the merchant private goon squad—the Hosts, slated to return in half a year.

Others have proposed the obvious—open the bathrooms to stop people from shitting and pissing all over town. I see as part of the usual genteel masquerade, you’ve opened up the bathrooms outside City Council briefly for this meeting, so middle class people don’t have to do their business in their pants or on the ground—as you force those outside to do.

A hug and a handshake to activist Ed Frey who provided a nighttime portapotty for the PeaceCamp 2010 Sleeping Ban protesters in front of the County Building more than three months.
… to the many Occupy Santa Cruz activists in 2011 whose San Lorenzo Campground provided shelter and facilities to several hundred at the same time Mayor Coonerty’s Council refused to keep the Park’s bathrooms open at night.
…to the 2015 Freedom Sleepers who brought a portapotty to City Hall when City Manager Martin Bernal shut down the bathrooms there to “discourage” the protesters.
…to Bathroom Task Force Activist Brent Adams who has constantly worked to provide sometime emergency facilities for a warming center at night, a newly-opened 24-hour homeless storage program, cleaner portapotties, and video documentation of the City’s dubious doodoo doings.
…to former Councilmembers Posner and Comstock—who opened up—however briefly and in spite of staff obstruction an overnight restroom (Soquel-Front garage) & a still surviving 24-hour portapotty (Laurel and Front).
…even an acknowledgment to former Parks and Rec boss, Mauro Garcia—who addressed the Hepatitis A epidemic. He set up portapotties and wash stations along the San Lorenzo walkway during the campground last fall. Outrageously, they are all gone now and the regular Park bathroom there locked.
…plus particularly honorable mention to Zav Hershfield, Pat Colby, and others who unsuccessfully tried to talk reason to City Council with their “Give a Shit” campaign last year trying to restore City Hall bathroom access.

But many bathrooms remain closed during the day, and all are closed at night.

Those of you who are tired of this crappy situation are of course welcome to help Conscience in Action. That’s the Coalition offering ideas, suggestions, and impromptu assistance to those trying to hold their bowels and their water. I’ll be joining them Thursday at noon across the street in front of the P & R Dept.at 323 Church St. in search of public restrooms.

How explicit do we have to be to shame the shameless politicians and staff? I don’t know. Do we have to bring breathing gear and bags of poop to the next Council meeting?

(Mayor David Terrazas has regularly cut back public speaking time during Oral Communications from three minutes to two minutes. Much of this speech was not given because of Terrazas arbitrarily imposed a 90 second limit on each speaker, violating promises given. He also made a dozen or more people wait 45 minutes beyond the scheduled time to speak—and then announcing the shortened time.)

http://www.huffsantacruz.org
Add Your Comments
LATEST COMMENTS ABOUT THIS ARTICLE
Listed below are the latest comments about this post.
These comments are submitted anonymously by website visitors.