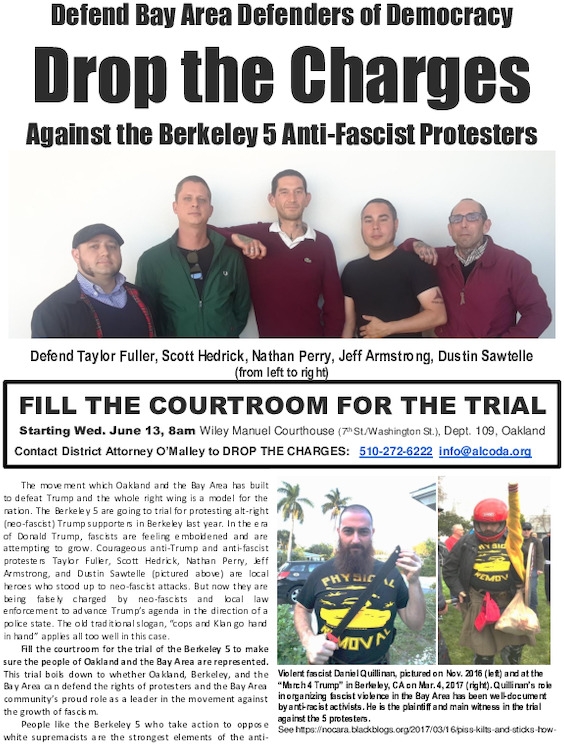 The movement which Oakland and the Bay Area has built to defeat Trump and the whole right wing is a model for the nation. The Berkeley 5 are going to trial for protesting alt-right (neo-fascist) Trump supporters in Berkeley last year. In the era of Donald Trump, fascists are feeling emboldened and are attempting to grow. Courageous anti-Trump and anti-fascist protesters Taylor Fuller, Scott Hedrick, Nathan Perry, Jeff Armstrong, and Dustin Sawtelle (pictured above) are local heroes who stood up to neo-fascist attacks. But now they are being falsely charged by neo-fascists and local law enforcement to advance Trump’s agenda in the direction of a police state. The old traditional slogan, “cops and Klan go hand in hand” applies all too well in this case.

Fill the courtroom for the trial of the Berkeley 5 to make sure the people of Oakland and the Bay Area are represented. This trial boils down to whether Oakland, Berkeley, and the Bay Area can defend the rights of protesters and the Bay Area community’s proud role as a leader in the movement against the growth of fascism.

People like the Berkeley 5 who take action to oppose white supremacists are the strongest elements of the anti-Trump movement and therefore the biggest threat to Trump's presidency. The courage of anti-Trump protesters to stand up to violent neo-fascists in Berkeley last year helped keep our whole community safer.

Across the country, from Washington, D.C. to the Bay Area, police departments who endorsed Trump's presidential election and who repeatedly defend his racist policies are bringing false charges against anti-Trump and anti-fascist protesters to try to minimize the number of anti-Trump activists and prevent the growth of the movement. This trial represents the right of community members to collectively protest and defend each other and their communities from Trump’s neo-fascist supporters.

On March 4, 2017, alt-right (neo-fascist) Trump supporters called a “March 4 Trump” demonstration, “March On Berkeley,” to make violent attacks on black, Latina/o, immigrant, Muslim, LGBT, women, and progressive members of the Bay Area. Anti-Trump and anti-fascist protesters outnumbered them in a determined and integrated protest, making clear that neo-fascist thugs are not welcome in our community. Thanks to the courageous action of anti-fascist protesters, a tragedy like the murder of Heather Heyer in Charlottesville was not replicated here in the Bay Area. Taylor Fuller, Scott Hedrick, Nathan Perry, Jeff Armstrong, and Dustin Sawtelle have the courage of their convictions to protest the alt-right (neo-fascist) attacks on the Bay Area’s black, Latina/o, immigrant, Muslim, LGBTQ, and anti-racist communities. It’s vital that we defend them.

Daniel Quillinam is a self-proclaimed fascist sympathizer and one of the main organizers of the repeated alt-right protests in Berkeley in 2017. He came to the pro-Trump rally on March 4, 2017 armed with a massive knife, a huge wooden club, wooden shield, and wearing a motorcycle helmet and body armor. He has a history of threatening and attacking anti-Trump organizers and protesters in Berkeley. On March 4, Quillinan violently attacked protesters and sustained injuries as a result. Now Quillinan, the Berkeley police, and the Alameda County Prosecutor are working together to target the Berkeley 5 with false charges for standing against Trump and his neo-fascist supporters.

It’s an absurd and disgusting travesty of justice for the police, much less anyone, to claim that Quillinan was a victim in this case. At the March 4 protest and others in the last 2 years, police and even firefighters have simply watched passively while Trump supporters and fascists assaulted unarmed anti-Trump and anti-fascist protesters. Afterwards, local authorities targetted peaceful anti-fascist protestors for prosecution while doing nothing to go after the fascist thugs.

The prosecution of the Berkeley 5 is part of a broader pattern of fascists working with police and DA in their shared interests. In Berkeley and other parts of the country, the DA and police are conspiring with the fascists to prosecute anti-Trump and anti-fascist activists. In Berkeley, Sacramento, and Anaheim, fascists came heavily armed with knives and shields in full view of police. They attacked anti-Trump protesters throughout the day while the police and firefighters stood by and did nothing to stop them.

It’s crucial that the anti-Trump movement in the Bay Area defend these 5 local heroes. Taylor, Scott, Nathan, Jeff, and Dustin represent all that we are proud to stand for. Defending the Berkeley 5 is the most important way to defend our movement right now, defeat Trump’s neo-fascist base, and get Trump out. The trial is public and the community has every right to attend. Fill the courtroom starting on Wed. June 13 to Fri. June 15 from 8AM—4:30PM. It’s time for Oakland and whole Bay Area to speak for ourselves by filling the courtroom!

“These Nazi’s are dangerous. They’re coming to attack our community. We can’t let them do that.”—Taylor Fuller, Berkeley 5 defendant, security

“Trump, his policies, and his followers are a threat to the workers, people of color, and immigrants--the ones that built this country and are treated as second class citizens. Racism, sexism, nationalism, and homophobia are a threat to humanity. These views must not be normalized or accepted anywhere or at any time. Now more than ever we are threatened with fascism and we must all stand united and fight for a better world. Defending our communities from right-wing violence is necessary when we are under attack. For me it’s about love for humanity, it’s about morals, not politics.” –Scott Hedrick, Berkeley 5 defendant, machine operator

“If we don’t take a stand now, fascism’s poison will spread until there is no cure. We have an obligation to protect our families and our communities.” –Nathan Perry, Berkeley 5 defendant, landscaper

“Building a sanctuary city means more than simply passing a law or enacting an ordinance. It means people taking action in their communities to protect and support those who are vulnerable and targeted by the state.”—Jeff Armstrong, Berkeley 5 defendant, union organizer

“As a white male on American soil it is my responsibility and obligation to stand up to fascism and white supremacy to make sure it cannot harm our diverse communities.” --Dustin Sawtelle, Berkeley 5 defendant, tattoo artist and youth outreach instructor

Coalition to Defend Affirmative Action, Integration and Immigrant Rights and Fight for Equality By Any Means Necessary (BAMN)
Hotline: 510-817-2617 BAMN.com facebook.com/bamnpage email [at] bamn.com
END_OF_DOCUMENT_TOKEN_TO_BE_REPLACED
Added to the calendar on Mon, Jun 11, 2018 3:34PM
Add Your Comments
Support Independent Media
We are 100% volunteer and depend on your participation to sustain our efforts!