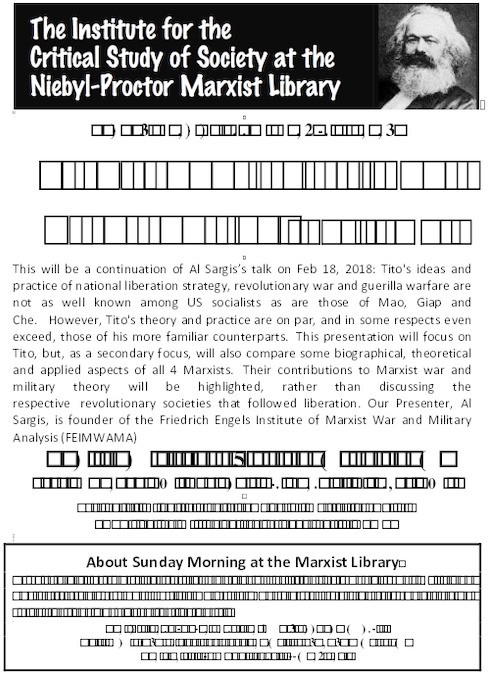 This will be a continuation of Al Sargis’s talk on Feb 18, 2018: Tito's ideas and practice of national liberation strategy, revolutionary war and guerilla warfare are not as well known among US socialists as are those of Mao, Giap and Che. However, Tito's theory and practice are on par, and in some respects even exceed, those of his more familiar counterparts. This presentation will focus on Tito, but, as a secondary focus, will also compare some biographical, theoretical and applied aspects of all 4 Marxists. Their contributions to Marxist war and military theory will be highlighted, rather than discussing the respective revolutionary societies that followed liberation. Our Presenter, Al Sargis, is founder of the Friedrich Engels Institute of Marxist War and Military Analysis (FEIMWAMA)

For info or to subscribe to our weekly announcements,
Call Gene Ruyle at 510-332-3865 or email: cuyleruyle [at] mac.com
For our full schedule, go to icssmarx.org
END_OF_DOCUMENT_TOKEN_TO_BE_REPLACED
Added to the calendar on Sun, May 27, 2018 3:11PM
Add Your Comments
Support Independent Media
We are 100% volunteer and depend on your participation to sustain our efforts!