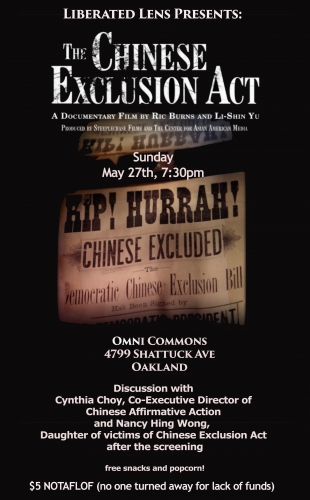 Import event into your personal calendar
Date:
Sunday, May 27, 2018
Time:
7:30 PM - 9:00 PM
Event Type:
Screening
Organizer/Author:
Liberated Lens film collective
Location Details:
Omni Commons, 4799 Shattuck Ave, Oakland
"The Chinese Exclusion Act" is a documentary by Ric Burns and Li-Shin Yu, produced by Steeplechase Films and the Center for Asian American Media (CAAM). The film explores the important connections between the 1882 Chinese Exclusion Act – the only federal legislation in United States history ever to single out and name a specific race and nationality for exclusion from immigration and citizenship – and the history of American civil liberties, immigration, labor, and culture.

This film examines the dramatic social, political, and economic circumstances that lead to this landmark piece of legislation and the wide-ranging consequences it had on national attitudes towards race, culture, politics, and society.

The film also shines a light on the forgotten history of Chinese American resilience and resistance to the exclusionary laws and the affronts to their civil rights, including educational segregation, forced registration, and mass lynchings. Chinese Americans resisted in many ways, including through community organizing, civil disobedience, and the justice system. They brought 10,000 cases to federal courts, which led to a number of legal precedents that are defining to this day.

At its core, "The Chinese Exclusion Act" is a deeply American story about immigration and national identity, civil rights and human justice, and how we define who can be an American and what being an American means. The film examines the economic, cultural, social, legal, racial, and political dimensions of the law; the forces and events that gave rise to it; and the effect it has had, and continues to have, on American culture and identity, as well as the larger issues of globalization, immigration, labor, and civil rights that continue to dominate headlines today.

A feature-length version of the film will premiere on PBS on May 29th, 5pm PST. We will instead be showing a 38 minute version followed by a community discussion with panelists.

~ Liberated Lens ~
END_OF_DOCUMENT_TOKEN_TO_BE_REPLACED
Added to the calendar on Sat, May 19, 2018 8:51PM
Add Your Comments
Support Independent Media
We are 100% volunteer and depend on your participation to sustain our efforts!