Add an Event
Newswire
Calendar
Features
Home
Donate
From the Open-Publishing Calendar
From the Open-Publishing Newswire
Indybay Feature
Publish to Newswire
Add an Event
Related Categories: California | East Bay | Anti-War | Global Justice & Anti-Capitalism | Racial Justice
Settlers: The Mythology of the White Proletariat from Mayflower to Modern
by Kersplebedeb Left-Wing Books
Saturday May 12th, 2018 10:28 AM
“Settlers is a critical analysis of the colonization of the Americas that overturns the 'official' narrative of poor and dispossessed European settlers to reveal the true nature of genocidal invasion and land theft that has occurred for over five hundred years. If you want to understand the present, you must know the past, and this book is a vital contribution to that effort.”
—Gord Hill, author of 500 Years of Indigenous Resistance 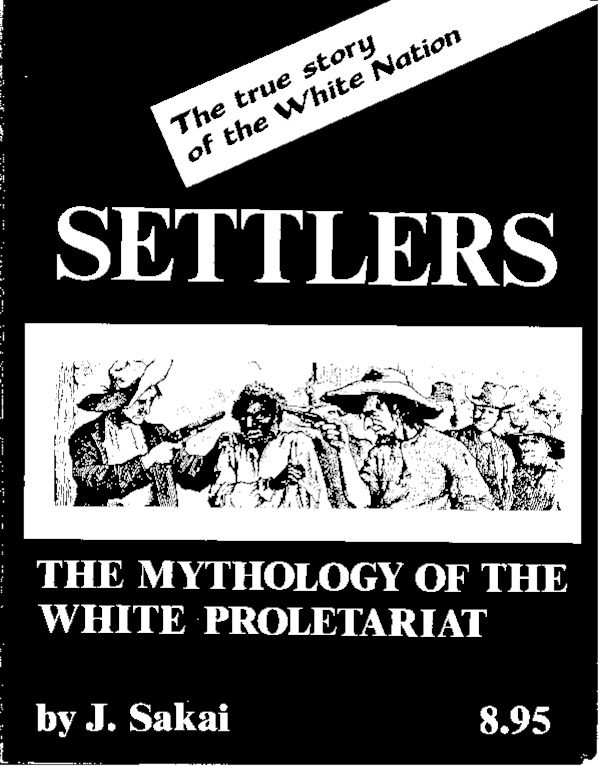 Download PDF (7.8MB)
Settlers is a uniquely important book in the canon of the North American revolutionary left and anticolonial movements. First published in the 1980s by activists with decades of experience organizing in grassroots anticapitalist struggles against white supremacy, the book soon established itself as an essential reference point for revolutionary nationalists and dissident currents within the predominantly colonialist Marxist-Leninist and anarchist movements at that time.

Always controversial within the establishment Left Settlers uncovers centuries of collaboration between capitalism and white workers and their organizations, as well as their neocolonial allies, showing how the United States was designed from the ground up as a parasitic and genocidal entity. Settlers exposes the fact that America’s white citizenry have never supported themselves but have always resorted to exploitation and theft, culminating in acts of genocide to maintain their culture and way of life. As recounted in painful detail by Sakai, the United States has been built on the theft of Indigenous lands and of Afrikan labor, on the robbery of the northern third of Mexico, the colonization of Puerto Rico, and the expropriation of the Asian working class, with each of these crimes being accompanied by violence.

This new edition includes “Cash & Genocide: The True Story of Japanese-American Reparations” and an interview with author J. Sakai by Ernesto Aguilar.


What People Are Saying


“Settlers is a critical analysis of the colonization of the Americas that overturns the 'official' narrative of poor and dispossessed European settlers to reveal the true nature of genocidal invasion and land theft that has occurred for over five hundred years. If you want to understand the present, you must know the past, and this book is a vital contribution to that effort.”
—Gord Hill, author of 500 Years of Indigenous Resistance

“Great works measure up, inspire higher standards of intellectual and moral honesty, and, when appreciated for what they are, serve as a guide for those among us who intend a transformation of reality. Settlers should serve as a reminder (to anyone who needs one) of the genocidal tendencies of the empire, the traitorous interplay between settler-capitalist, settler-nondescript, and colonial flunkies."
—Kuwasi Balagoon, Black Liberation Army

“When Settlers hit the tiers of San Quentin, back in 1986, it totally exploded our ideas about what we as a new class of revolutionaries thought we knew about a so-called ‘united working class’ in amerika. And what's more, it brought the actual contradictions of national oppression and imperialism into sharp focus. It was my first, and as such my truest, study of the actual mechanics behind the expertly fabricated illusion of an amerikan proletariat.”
—Sanyika Shakur, author of Monster: The Autobiography of an L.A. Gang Member

J. Sakai is a revolutionary intellectual with decades of experience as an activist in the United States. On the subject of his own past, and the writing of Settlers, he has said:

"In the Fall 1961, i found myself with other militant Sit-In veterans in the reborn Oakland chapter of Congress of Racial Equality, picketing a major store which had refused to hire New Afrikans. Even in the Bay Area that was the custom and law back then. It had started years earlier for me in high school in L.A.'s 1950's San Fernando Valley. Where as the lone uneducated leftist i had tried unsuccessfully to sell copies of the socialist labor party newspaper (the only one i could get) every week to my classmates. At the same time was working as an Asian houseboy for the family of a Jewish used car dealer (stereotypes abound for a reason). Was fired for taking a night off for my own high school graduation. The wife lost it and screamed, " People like you don't need graduations!" A month later was living in a different state to find a job and avoid the "colored" military draft. And active as the novice food drive coordinator in a long, bitter, ugly hospital workers' strike, whose main public demand was pay raises up to the federal minimum wage (we lost badly).

Have been through a thousand campaigns and movement groups since then, and can't believe i've been so dumb so often. In 1975, while mostly active doing Afrikan liberation movement support with radical exiles from various countries, i started writing a historical investigation into the puzzling class politics of euro-amerikan workers. Which i naively thought would only be a quick movement paper. Eight years later what became re-titled as Settlers was finished. Even then i didn't believe there was any audience for it, and planned to only photocopy fifty copies of my typed draft for internal education in the underground black liberation army coordinating committee. Comrades with more sense than myself insisted that we publish it as a book if only for the liberation movement. Over the years, we took it through three editions, but finally it's time to hand it on to new publishers. Remember only, i wrote this with my life."
https://www.leftwingbooks.net/book/content...
Add Your Comments
Support Independent Media
We are 100% volunteer and depend on your participation to sustain our efforts!