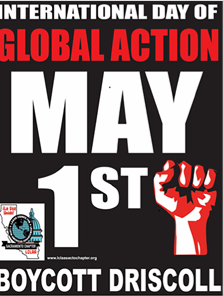 Global Day Of Action To Support San Quintin Farmworkers Union Fight For A Union and living wages.
On May Day WSAN Supports International Day Of Action For San Quintin Driscoll Workers Fighting For Union Recognition and Living Wages
On April 7, 2018, the Workers Solidarity Action Network initiated the call for an international day of action on May Day 2018 for the 80,000 workers in San Quintin who are fighting for union recognition and living wages.
These workers face slave like conditions with wages of $7 to $12 a day on the border of California working for the US based multi-national Driscolls. We are calling on all workers as part of their action on May Day to go to a grocery store that carries Driscolls berries and let them know that these berries should not be stocked.
Please video tape and photograph your actions and post it on our website.
Our direct solidarity with our brothers and sisters on May Day is an important act of international solidarity,
For more information
http://www.workerssolidarityactionnetwork.org
https://www.facebook.com/lclaasacramento/?fref=ts
Additional media:
https://www.youtube.com/watch?v=5L3ZbQN3Iog
https://www.youtube.com/watch?v=qCKZWssS4Zk
https://www.youtube.com/watch?v=CzrSngfXiiA
http://www.workerssolidarityactionnetwork.org
Add Your Comments
Support Independent Media
We are 100% volunteer and depend on your participation to sustain our efforts!