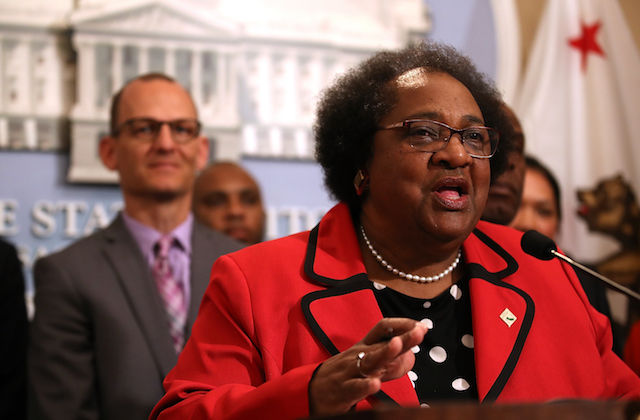 Spurred by the fatal police shooting of unarmed Black man Stephon Clark, California lawmakers yesterday (April 3) introduced a measure that would alter the standard for when law enforcement officers can use deadly force.

Titled the Police Accountability and Community Protection Act (the full text of which is not yet available via the California State Assembly), the measure would change the standard of firearm use from “reasonable use” to “necessary force,” meaning officers would be permitted to open fire only when there is no other reasonable alternative to prevent injury or death.

“We need to ensure that our state policy governing the use of deadly force stresses the sanctity of human life and is only used when necessary,” Democratic Assemblywoman Shirley Weber, who introduced the bill, said at a press conference yesterday. “Deadly force can be used, but only when it is completely necessary.”

The bill’s introduction comes less than three weeks after Clark, 22, was killed by Sacramento police in his grandmother’s backyard. Police officers, responding to reports of someone breaking car windows, claimed Clark advanced on them with a gun. It was quickly revealed, however, that Clark was holding a cell phone, and a pathologist report showed that six of the eight bullets that hit Clark entered the back of his body.

Under current California law, with its “reasonable force” statute, it is rare for police officers to be charged and convicted following a shooting. That guideline “gives very broad discretion for using deadly force,” Lizzie Buchen of the American Civil Liberties Union, which supports the bill, told The Associated Press. “It doesn’t mean there has to have been a threat. If a reasonable officer could have perceived a threat and responded with deadly force, then it’s legal.”

Lawmakers at the press conference said that California police officers killed 162 people last year, only half of whom were armed, and they cited studies showing that African Americans are much more likely to die from police shootings than Whites.

Criminal justice experts, though supportive of the California measure, warned that it may not reduce the number of police shootings. Geoffrey Alpert, a criminology professor at the University of South Carolina, told CNN that the bill “doesn’t seem to change anything other than the language officers will use when explaining why deadly force was used.”