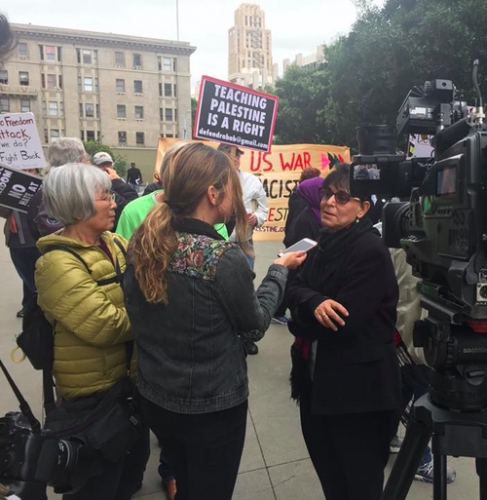 original image (500x513)
The latest complaint is the Lawfare Project’s third attempt. They withdrew the first complaint themselves, and the second was dismissed by a federal Judge in March because it alleged no unlawful conduct.

One of Abdulhadi’s attorneys, Mark Kleiman, explained, “The Lawfare Project’s latest complaint has recycled losing allegations and baseless charges from the prior proceedings. It’s the same claims dressed up in new jargon.”

Her other attorney, Behnam (Ben) Gharagozli added, “This lawsuit will ultimately fail because Lawfare Project simply lacks the evidence and the requisite legal allegations that they need to prevail.”

The lawsuit culminates a years-long suppression campaign targeting Abdulhadi and other campus activists. Plaintiffs argued that Abdulhadi’s research in Palestine, establishing a partnership with the Palestinian An-Najah University, a 2016 student protest of the mayor of Jerusalem, and a 2017 know your rights fair have created a hostile environment for Jewish students at SFSU.

Lawfare’s third attempt adds multiple false statements about Abdulhadi and other supporters of Palestinian rights. After the judge determined that she is not an official university actor, the new complaint also sues Abdulhadi in her personal capacity.

The Lawfare Project, which identifies as the “legal arm of the pro -Israel community,” has declared their intent to punish and silence advocacy for Palestine at San Francisco State. Abdulhadi, who is returning from a research trip to Palestine, was traveling and could not be reached for immediate comment.

Federal courts and the Department of Education’s Office for Civil Rights have consistently held that speech critical of a nation’s policies is protected under the First Amendment and does not constitute harassment.

The Lawfare Project has also filed a second lawsuit in California state court alleging that SFSU violated state anti-discrimination laws by allowing student speech for Palestinian rights. This separate suit does not name Abdulhadi or any of the other individuals.