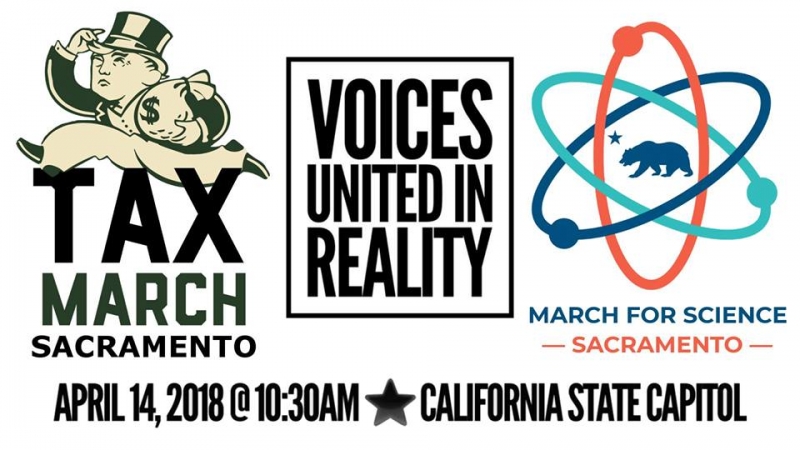 VOICES UNITE - On April 14th, 2018, March for Science Sacramento and Tax March Sacramento will hold a joint rally and march in support of our causes.

The March for Science champions robustly funded and publicly communicated science as a pillar of human freedom and prosperity. We unite as a diverse, nonpartisan group to call for science that upholds the common good, and for political leaders and policymakers to enact evidence-based policies in the public interest.

Tax March, a nonpartisan coalition of over 50 national organizations, has embarked on a 100 Day national tour to repeal the TrumpTax. Recently passed Tax Legislation will raise taxes for 92 million middle-class families, rip health care away from 13 million people, and threaten life-saving programs and nonprofits — all to give tax breaks to millionaires, billionaires, and wealthy corporations.

With so many pressing issues affecting the United States, it's more important than ever for those concerned to STAND TOGETHER to say that the current state of government is NOT OK.

These issues, while appearing separate, are actually intersectional! To give just one example, through Tax Reform, the current administration opened up the possibility of oil drilling in the Arctic National Wildlife Refuge (ANWR), which will endanger a fragile and unique ecosystem for the sake of extracting and burning fossil fuels!

Taxes and budgets are about values. This event intends to unite everyone who believes that the environment should not be destroyed to benefit the rich, that services to the poor shouldn't be cut so corporations can pay less taxes, and that policy should be based on FACTS and REALITY and not lies or conjecture.

Disclaimer: By choosing to attend this event, you agree participate non-violently and in accordance with the law, to work to de-escalate confrontations with others, and to obey the orders of authorized event marshals and of law enforcement. You also acknowledge that you are solely responsible for any injury or damage to your person or property resulting from or occurring during this event, and that you release all event sponsors and organizers (and their officers, directors, employees, and agents) from any liability for that injury or damage.

Kid Friendly Event
END_OF_DOCUMENT_TOKEN_TO_BE_REPLACED
Added to the calendar on Sat, Mar 31, 2018 11:09AM
Add Your Comments
Support Independent Media
We are 100% volunteer and depend on your participation to sustain our efforts!