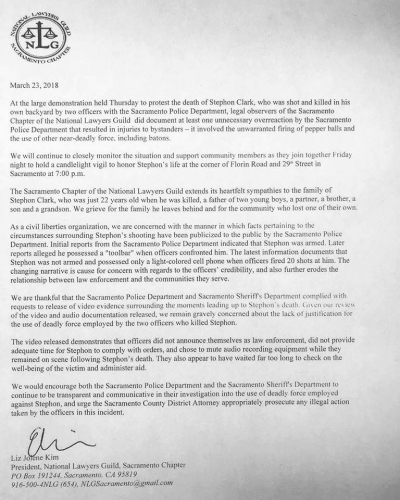 Elizabeth Jolene Kim, board president of the Sacramento NLG Chapter – which deployed a dozen legal observers Thursday – was a victim of an unprovoked pepper ball attack, and NLG personnel on scene observed injured protestors who were just standing on the sidewalk when they were attacked.

The letter in its entirety:

We will continue to closely monitor the situation and support community members as they join together Friday night to hold a candlelight vigil to honor Stephon’s life at the corner of Florin Road and 29th Street in Sacramento at 7:00 p.m.

The Sacramento Chapter of the National Lawyers Guild extends its heartfelt sympathies to the family of Stephon Clark, who was just 22 years old when he was killed, a father of two young boys, a partner, a brother, a son and a grandson. We grieve for the family he leaves behind and for the community who lost one of their own.

As a civil liberties organization, we are concerned with the manner in which facts pertaining to the circumstances surrounding Stephon’s shooting have been publicized to the public by the Sacramento Police Department. Initial reports from the Sacramento Police Department indicated that Stephon was armed. Later reports alleged he possessed a "toolbar" when officers confronted him. The latest information documents that Stephon was not armed and possessed only a light-colored cell phone when officers fired 20 shots at him. The changing narrative is cause for concern with regards to the officers’ credibility, and also further erodes the relationship between law enforcement and the communities they serve.

We are thankful that the Sacramento Police Department and Sacramento Sheriff's Department complied with requests to release of video evidence surrounding the moments leading up to Stephon’s death. Given our review of the video and audio documentation released, we remain gravely concerned about the lack of justification for the use of deadly force employed by the two officers who killed Stephon.

The video released demonstrates that officers did not announce themselves as law enforcement, did not provide adequate time for Stephon to comply with orders, and chose to mute audio recording equipment while they remained on scene following Stephon’s death. They also appear to have waited far too long to check on the well-being of the victim and administer aid.

We would encourage both the Sacramento Police Department and the Sacramento Sheriff's Department to continue to be transparent and communicative in their investigation into the use of deadly force employed against Stephon, and urge the Sacramento County District Attorney appropriately prosecute any illegal action taken by the officers in this incident.


https://www.facebook.com/NLGSacramento/posts/559621741089584
END_OF_DOCUMENT_TOKEN_TO_BE_REPLACED
Add Your Comments
Support Independent Media
We are 100% volunteer and depend on your participation to sustain our efforts!