Add an Event
Newswire
Calendar
Features
Home
Donate
From the Open-Publishing Calendar
From the Open-Publishing Newswire
Indybay Feature
Publish to Newswire
Add an Event
Related Categories: International | U.S. | Anti-War | Education & Student Activism
March for Our Lives and the Rest of the World's
by Riva Enteen
Saturday Mar 24th, 2018 12:39 PM
In a promotional video for the March for Our Lives, former US soldiers say they don't want the assault rifles that they've used abroad aimed at US citizens, especially the students suffering one school massacre after another. Isn't it time to stop aiming those guns—and our missiles, fighter jets, and drones—at the rest of the world? 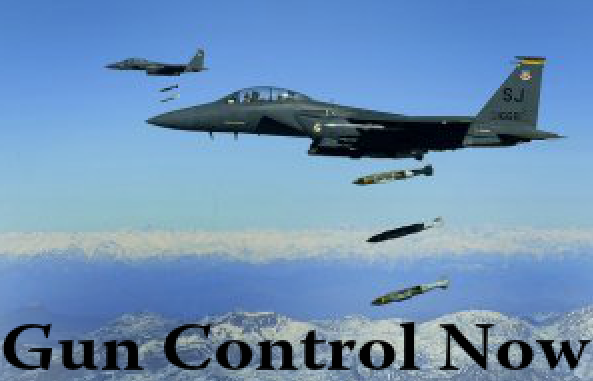 As a baby boomer, I came of age as a civil rights and anti-war activist in the 60s and a feminist in the 70s. Maybe that's why I find it so counter intuitive that there are now women's marches and student marches that don't talk about peace, even though the US military is at war in at least seven countries with no end in sight.

Why have the recent women’s marches been so large, with not even a whisper of peace as an issue? As I often say, follow the money, in this case the money that weapons manufacturers give to Democratic Party candidates and Washington lobbyists. The Democratic Party has 90 geographically discrete websites promoting their involvement in the March for Our Lives with a voter registration focus. But has the Democratic Party ever responded to our demands for gun control when the power was in their hands? After Obama’s 2008 landslide, the Democrats held the White House, the Senate, and the House, but today people are still protesting a worsening epidemic of mass domestic shootings. I remember when the Sandy Hook elementary school massacre happened, and Obama sounded convincing when he said that he would fight for more gun controls. Those were elementary school children!

In fact, Obama signed only two major laws that address how guns are carried in America, and in 2011 he bragged, "In fact, my administration has not curtailed the rights of gun owners—it has expanded them, including allowing people to carry their guns in national parks and wildlife refuges." Attempts to limit the size of gun magazines, expand background checks of gun buyers, and ban gun sales to buyers on terrorism watch lists all failed to pass under Obama. The legislation died on the Democrat controlled Senate floor early in his second term, when he should have been at the height of his power —without another presidential election to worry about.

Even what Obama proposed was inadequate. “For all the pomp and ceremony, nothing in the president’s proposals is going to put a dent in U.S. gun crime or even substantially change the federal legal landscape,” wrote Adam Bates, a policy analyst with the libertarian Cato Institute's Project on Criminal Justice.

Related, and also during the Obama Aministration, was the George Zimmerman/ Trayvon Martin “stand your ground” tragedy. Obama said that if he had a son, he would look like Trayvon. He again sounded convincing, as though he would address the issue, yet there were more “stand your ground” states when he left office than when Trayvon was killed. This week, in a grotesque finale, Zimmerman auctioned off the gun he used to kill Trayvon for $250,000, after backing out of a lower offer of $150,000.

The height of the most recent anti-war movement was during the Iraq War under Bush, Jr. It faded away under the first Black president, but the wars didn’t fade away—they were expanded. What is stark now is that the Democrats don't even want a peace movement under a Republican administration. There is bipartisan agreement that war is good for business, so Democrats are dodging the issue while supporting women standing up to predators like Harvey Weinstein, Donald Trump, (and Bill Clinton), and sounding tough on gun control with no track record of follow-through. People might disagree about how different the two parties are on foreign policy, but it is clear that the Democrats are not an anti-war party. They support women's marches and gun control marches that don't talk about peace.

Gun control begins at the Pentagon. That war is good for business speaks volumes about our loss of humanity, and our scorn for international law, which our officials invoke if it seems to justify US wars and ignore when it doesn’t. The US is by far the largest arms dealer in the world, and it's common knowledge that some of the weapons get into the hands of the "bad guys." Until we stop the plague of endless war that began after 9-11, guns will be the norm, and they will be on our streets as well as the streets of Afghanistan, Iraq, Syria, Yemen, and all the African nations now occupied by AFRICOM, the US Africa Command. At the same time, our missiles will rain down on innocents in the name of specious “humanitarian intervention” and stopping terrorism.

We need an anti-war movement, regardless of which duopoly party is in power. The lesser of two evils is the evil of two lessers. If we want peace in our streets, schools, movie theaters and music clubs, and those in other countries around the planet, we must march against war to affirm life. That’s a march for our lives that we desperately need.

Women, the givers of life, will confront the Pentagon in Washington D.C. on October 20-21. There will be local actions springing up, as they did during Occupy, so keep your ear to the ground and watch for updates on our website, http://www.marchonpentagon.com, and our Facebook page: https://www.facebook.com/events/184236778838247/ .

Riva Enteen is a member of the National Lawyer's Guild and a former chair of the KPFA Local Station Board.
http://www.marchonpentagon.com
Add Your Comments
LATEST COMMENTS ABOUT THIS ARTICLE
Listed below are the latest comments about this post.
These comments are submitted anonymously by website visitors.