Ten Years (1966-1976) of the Great Struggles of the Argentinian Working Class. 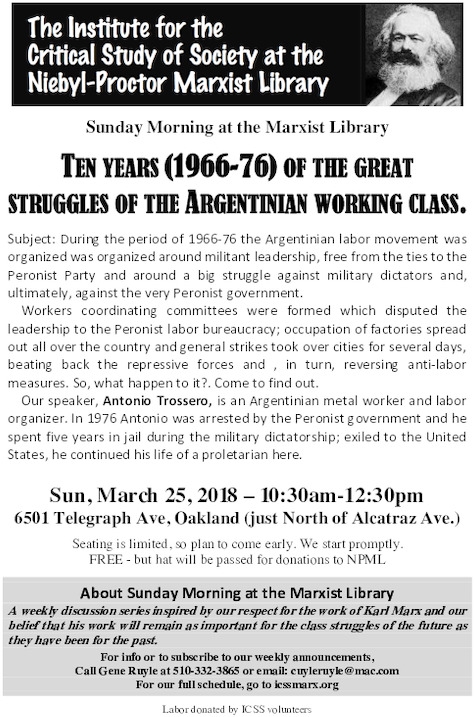 TEN YEARS (1966-76) OF THE GREAT STRUGGLES OF THE ARGENTINIAN WORKING CLASS.

Subject: During the period of 1966-76 the Argentinian labor movement was organized was organized around militant leadership, free from the ties to the Peronist Party and around a big struggle against military dictators and, ultimately, against the very Peronist government.
Workers coordinating committees were formed which disputed the leadership to the Peronist labor bureaucracy; occupation of factories spread out all over the country and general strikes took over cities for several days, beating back the repressive forces and , in turn, reversing anti-labor measures. So, what happen to it?. Come to find out.
Our speaker, Antonio Trossero, is an Argentinian metal worker and labor organizer. In 1976 Antonio was arrested by the Peronist government and he spent five years in jail during the military dictatorship; exiled to the United States, he continued his life of a proletarian here.

For info or to subscribe to our weekly announcements,
Call Gene Ruyle at 510-332-3865 or email: cuyleruyle [at] mac.com
For our full schedule, go to icssmarx.org
END_OF_DOCUMENT_TOKEN_TO_BE_REPLACED
Added to the calendar on Sun, Mar 18, 2018 9:33PM
Add Your Comments
Support Independent Media
We are 100% volunteer and depend on your participation to sustain our efforts!