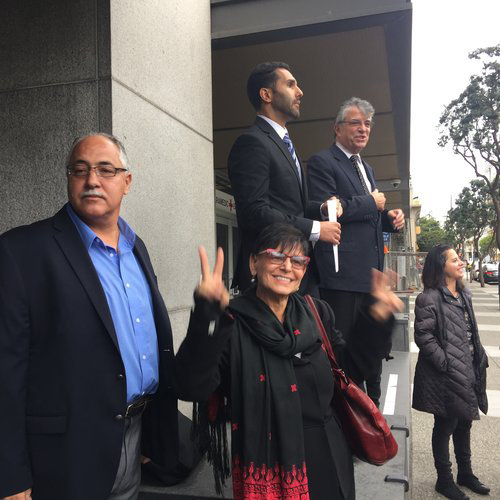 In dismissing the complaint, the court noted that the lawsuit was “full of barely relevant material” and did “not state a plausible claim for relief.” The judge did, however, give the plaintiffs an opportunity to rethink their claims and re-file the suit within 20 days.

Abdulhadi, director and founder of the Arab and Muslim Ethnicities and Diasporas Initiative at SFSU, is a leading scholar, educator and advocate for justice in/for Palestine. The lawsuit was filed by the Lawfare Project, a right-wing anti-Palestinian organization with an avowed mission of inflicting massive punishments against critics of Israel.

“Lawfare is skating on very thin ice,” said Mark Kleiman, an attorney for Abdulhadi. “If they tell the truth, they have no case against Dr. Abdulhadi. To continue to harass her with this lawsuit, they will have to lie about her.”

Behnam Gharagozli, who also represents Abdulhadi, added, “It’s heads we win, tails they lose. There is simply no way for this attack on Dr. Abdulhadi to succeed.”

The court threw out all of the Lawfare Project’s claims, including claims that SFSU’s failure to restrict speech critical of Israeli policies violated Jewish students’ First Amendment rights, their right to equal protection and Title VI of the Civil Rights Act of 1964.

“This is a major victory for academic freedom and for students supporting Palestinian rights. We have known all along that the lawsuit was completely without merit, and we are glad to see that the judge agrees,” said Palestine Legal Staff Attorney Zoha Khalili. “The plaintiffs failed to come up with a single valid claim at a stage where all they needed to do was tell a story that could potentially be a violation of the law.”

The dismissal is in line with past decisions by federal courts and the Department of Education’s Office for Civil Rights, which have consistently held that speech critical of a nation’s policies is protected under the First Amendment and does not constitute harassment.

SFSU is represented by Munger, Tolles & Olson LLP. In addition to Kleiman and Gharagozli, Abdulhadi is also represented by the firm Gavin Cunningham & Hunter. Palestine Legal has provided advocacy support to Abdulhadi and to students whose speech rights are threatened.