Add an Event
Newswire
Calendar
Features
Home
Donate
From the Open-Publishing Calendar
From the Open-Publishing Newswire
Indybay Feature
Publish to Newswire
Add an Event
Related Categories: California | Santa Cruz Indymedia | Environment & Forest Defense
Second New Year’s Count Supports Monarchs Movement Between Sites
by The Xerces Society
Friday Mar 9th, 2018 11:37 AM
The Xerces Society’s Western Monarch Thanksgiving Count provides a long-running record of the number of monarchs overwintering in California—including the steep decline of recent decades. Volunteers and biologists who take part in the Thanksgiving Count have been invaluable in monitoring the monarch population each fall for over twenty years. Last year, another count was added with the launch of the New Year’s Count—an opportunity to monitor the populations during a later period of the winter. [Photo: Unlike the forests where monarchs overwinter in Mexico, overwintering sites in California are fragmented and dispersed throughout the California coast. It’s likely that monarchs shift from one location to another during the overwintering season (Lara Drizd).] 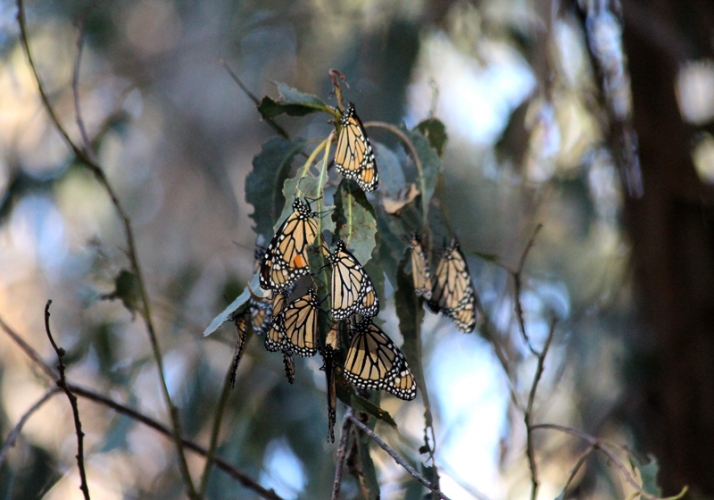 original image (800x560)
Monarchs are mobile and they move around through the season. Combining the data from the New Year’s and Thanksgiving counts allows us to better understand site and rangewide population changes. Monarch numbers at the 115 sites monitored during both of this season’s counts decreased by an average of 49% between Thanksgiving and the New Year (see figure below). This is similar to the change revealed by the previous New Year’s Count, which saw a 43% drop at 44 sites.

This change in monarch numbers is not consistent at all sites—numbers decreased at 87 sites, stayed the same at 15, and increased at the remaining 13—and at the sites experiencing a reduction, monarchs left at varying levels. All the monarchs had moved away from Natural Bridges State Park by the New Year and Morro Bay State Park saw a 99% drop in numbers. Elsewhere there were declines of lesser magnitude, seen at Pacific Grove’s famous Butterfly Grove Sanctuary with an 18% drop—and at some sites there was almost no change. For example, Pismo State Beach Monarch Butterfly Grove experienced only a 2% drop. In contrast, Ellwood Main in Goleta had a 57% increase in monarchs between Thanksgiving and New Year, and Moran Lake had a 50% increase.

The declines are partially due to mortality during winter storms, but some of the changes are simply because monarchs move to a different site, maybe driven away from one site by weather or predation pressure or perhaps in search of more resources, such as water and nectar. Monarch movement has also been observed in tagging and overwintering habitat preference studies.

For example, a likely case of movement was seen at two sites in San Luis Obispo. Jessica Griffiths—the county’s Thanksgiving Count regional coordinator—and her volunteers visited two adjacent sites during the Thanksgiving Count, finding zero monarchs at the first site and over 4,000 at the second. When they returned for the New Year’s Count, the monarchs appeared to have swapped locations: there were 3,000 monarchs at the first site and only 8 at the other!

The value of the New Year’s Count is two-fold. At the site level, it helps us identify which locations see big drops in monarch use over the season. These places may benefit from active management to make them more suitable for monarchs season-long and to reduce mortality. At a rangewide-level, the New Year’s Count helps us estimate the mortality rate and the potential spring breeding population that will be the foundation for expansion into the summer breeding range.

The massive volunteer effort of the Thanksgiving and New Year’s counts play a vital role in tracking the size of the California overwintering population, which allows us to assess the health of the monarch population in western North America. None of it would be possible without the regional coordinators and volunteers, and we are hugely grateful for their time, effort, and love for these butterflies.

We hope to continue to grow participation in the New Year’s Count in 2019. If you’d like to find out how to participate, check out the Western Monarch Thanksgiving Count website: http://www.westernmonarchcount.org/data. You’ll also be able to view all the data from this season and others, find out where you can see monarchs during the season, and learn more about monarch conservation. 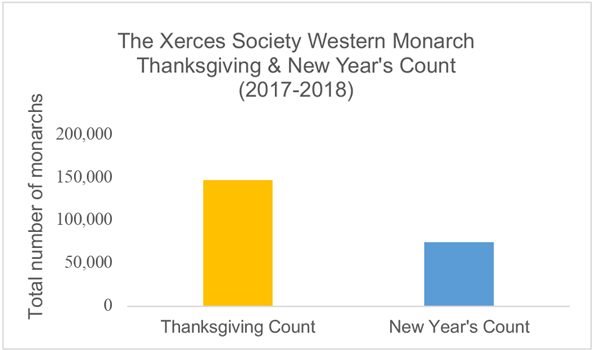 Monarch abundance at 115 overwintering sites in California counted during both the 2017-2018 Thanksgiving and New Year’s Count efforts.
https://xerces.org/
Add Your Comments
Support Independent Media
We are 100% volunteer and depend on your participation to sustain our efforts!