What is Socialism? A Panel Discussion 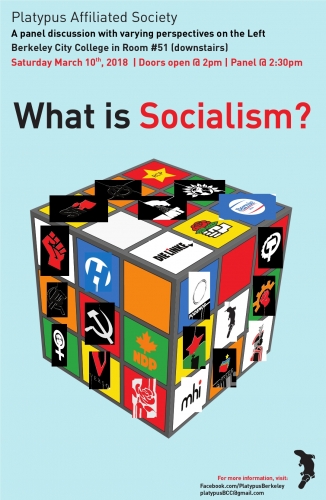 Import event into your personal calendar
Date:
Saturday, March 10, 2018
Time:
2:00 PM - 4:00 PM
Event Type:
Panel Discussion
Organizer/Author:
Platypus Affiliated Society
Email:
PlatypusBCC [at] gmail.com
Location Details:
Berkeley City College (2050 Center St, Berkeley) in Room #55 (downstairs)
Join us for a panel discussion on "What is Socialism?" in which various perspectives on the Left engage this question - followed by a Q&A with the audience.

This is a free and public event.

"This panel invites the speakers to reflect on the history of social democracy from a leftist viewpoint. Such a perspective raises the specter of the Second International, the political organization that led the workers’ movement for socialism around the turn of the 20th century.

The memory of social democracy is resuscitated by such phenomena as SYRIZA, Podemos, Jeremy Corbyn, and Bernie Sanders. But, do we in fact still need to reckon with the earlier history of Marxism—the split between Communists and Social Democrats—in order to understand the problem and project of social democracy today? How are the questions of social democracy and social revolution related today, in light of history? What has social democracy come to signify politically?"

The Platypus Affiliated Society, established in December 2006, organizes reading groups, public fora, research and journalism focused on problems and tasks inherited from the “Old” (1920s-30s), “New” (1960s-70s) and post-political (1980s-90s) Left for the possibilities of emancipatory politics today.
END_OF_DOCUMENT_TOKEN_TO_BE_REPLACED
Added to the calendar on Sat, Mar 3, 2018 8:31PM
Add Your Comments
Support Independent Media
We are 100% volunteer and depend on your participation to sustain our efforts!