Documentary: Requiem for the American Dream 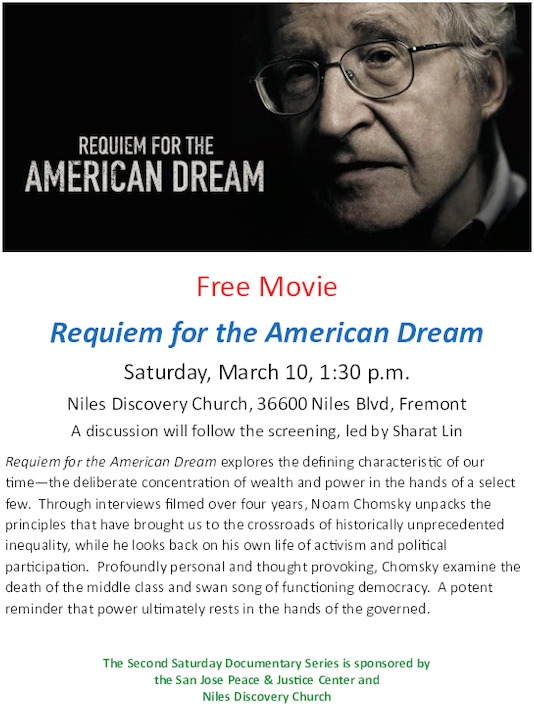 The film will be shown March 10 at 1:30 p.m. as part of the Second Saturday Documentary Series at Niles Discovery Church, 36600 Niles Blvd. at the corner of Nursery Avenue in Fremont. The screening is free and open to the public.

A linguist, cognitive scientist and social critic who recently left his longtime position at the Massachusetts Institute of Technology to join the University of Arizona, Chomsky has been a towering and controversial figure for more than six decades and the recipient of numerous awards. Requiem for the American Dream, directed by Peter Hutchison, Kelly Nyks and Jared P. Scott, is based on conversations with Chomsky recorded over the course of four years and later gathered into a book of the same name.

The film and book lay out 10 principles of concentration of wealth and power at work in America today, according to Chomsky’s website: Reduce democracy, shape ideology, redesign the economy, shift the burden onto the poor and middle classes, attack the solidarity of the people, let special interests run the regulators, engineer election results, use fear and the power of the state to keep the rabble in line, manufacture consent, marginalize the population.

A review in the New York Times calls the film “a timely 75-minute teach-in” that “melds history, philosophy and ideology into a sobering vision of a society in an accelerating decline.”

The film will be followed by a discussion moderated by political economist Sharat Lin, president of the San Jose Peace and Justice Center.

The Second Saturday Documentary Series is co-sponsored by Niles Discovery Church and the San Jose Peace and Justice Center.

https://www.facebook.com/SecondSatDocSeries/
END_OF_DOCUMENT_TOKEN_TO_BE_REPLACED
Added to the calendar on Wed, Feb 28, 2018 1:42PM
Add Your Comments
Support Independent Media
We are 100% volunteer and depend on your participation to sustain our efforts!