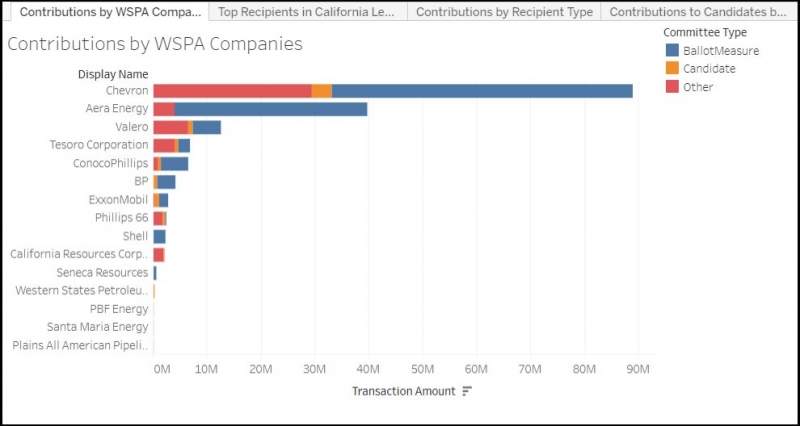 original image (990x528)
The Western States Petroleum Association (WSPA), the most powerful corporate lobbying group in California, and its members have contributed $170 million to California political campaigns since 2001, according to a new data analysis from MapLight released on February 14.

WSPA is the trade association for oil industry interests in the western states of Arizona, California, Nevada, Oregon, and Washington. WSPA members include multinational oil corporations such as Chevron, ExxonMobil, BP, Valero and the Plains All American Pipeline Company, the corporation responsible for the Refugio Beach Oil Spill of 2017.

WSPA and its members have contributed more than $112 million to ballot measure campaigns, $8 million to state candidates, and $50 million to other California political action committees and party committees, according to the MapLight analysis of data from the California Secretary of State compiled by Laura Curlin and Ashleigh McEvoy.

“Chevron tops the list of political donors from WSPA’s membership, contributing $89 million overall since 2001, the first year in which online data is available,” Maplight reported. “Aera Energy has contributed the second most at roughly $40 million, and Valero is third at $13 million.

The report documents all of the California legislators who have received campaign contributions from the oil industry since 2001.

Senator Jean Fuller, the Kern County Republican from Senate District 16 who has served as the Legislature’s most fervent advocate for Big Oil, received the most oil industry contributions of any legislator, $88,890.

The top recipients of WSPA member money in the California Legislature are listed below:

While the amount of money individual legislators have received from WSPA members is alarming, they pale in comparison to the $9.8 million from oil companies, gas companies and utilities that “climate leader” Governor Jerry Brown has received since he ran for his third term as governor, according to Consumer Watchdog. For more information on Governor Brown and his so-called "green" policies, see: http://www.consumerwatchdog.org/sites/default/files/2017-09/how_green_is_brown.pdf

In addition to pouring millions into campaigns, WSPA “augments its political influence with a massive lobbying presence in Sacramento,” topping the list of lobbyist spending in California in the third quarter of 2017, according to Maplight.

Big Oil dominated three out of the four top spots of expenditures by all lobbying organizations in 2017, according to documents from the California Secretary of State’s Office that I analyzed.

Outspending all of their competition, Chevron placed first with $8.2 million and the Western States Petroleum Association (WSPA), the trade association for the oil industry in the states of California, Oregon, Washington, Nevada and Arizona, placed second  $6.2 million. Tesoro Refining and Marketing Company finished fourth with $3.2 million. You can find the information on spending by employers of lobbyists here: cal-access.sos.ca.gov/…

Big Oil has become so powerful in California, in spite of the state’s largely undeserved “green” image, that every bill except one opposed by the oil industry has failed to make it out of the legislature over the past three years.

But WSPA and Big Oil wield their money and power not just through spending millions of dollars on lobbying and political campaigns. They also create Astroturf groups, work in collaboration with the media, and get appointed to positions on and influence key regulatory panels.

The “marine protected areas” created under the privately funded MLPA Initiative fail to protect the ocean from fracking, offshore drilling, pollution, military testing and all human impacts other than fishing and gathering. Yet state officials and corporate environmental NGO representatives praised the process overseen by Reheis-Boyd and other corporate interests as “open, transparent and inclusive,” though it was anything but.

There is no doubt that Big Oil has captured the regulatory apparatus from top to bottom in California — and we must curb and overcome the power of the oil and gas corporations in California to protect the public trust. For more information about the grassroots campaign to get oil money out of California politics, go to: https://www.oilmoneyout.com