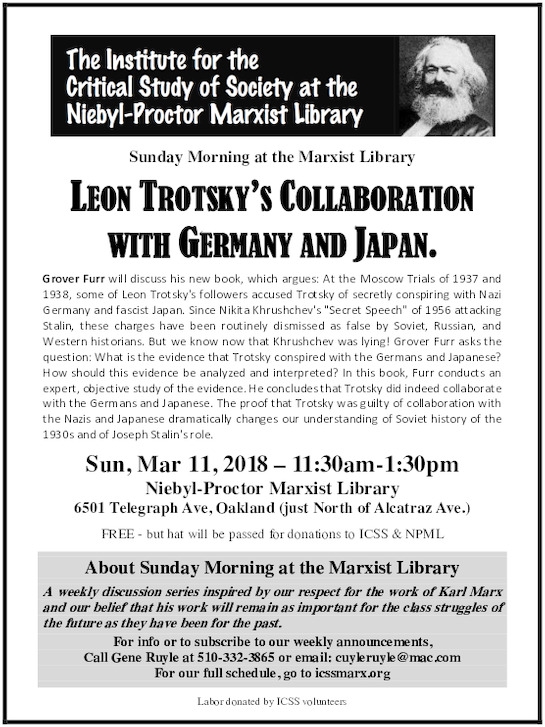 Grover Furr will discuss his new book, which argues: At the Moscow Trials of 1937 and 1938, some of Leon Trotsky's followers accused Trotsky of secretly conspiring with Nazi Germany and fascist Japan. Since Nikita Khrushchev's "Secret Speech" of 1956 attacking Stalin, these charges have been routinely dismissed as false by Soviet, Russian, and Western historians. But we know now that Khrushchev was lying! Grover Furr asks the question: What is the evidence that Trotsky conspired with the Germans and Japanese? How should this evidence be analyzed and interpreted? In this book, Furr conducts an expert, objective study of the evidence. He concludes that Trotsky did indeed collaborate with the Germans and Japanese. The proof that Trotsky was guilty of collaboration with the Nazis and Japanese dramatically changes our understanding of Soviet history of the 1930s and of Joseph Stalin's role.

FREE - but hat will be passed for donations to ICSS & NPML

For info or to subscribe to our weekly announcements,
Call Gene Ruyle at 510-332-3865 or email: cuyleruyle [at] mac.com
For our full schedule, go to icssmarx.org
Labor donated by ICSS volunteers
Added to the calendar on Tue, Feb 13, 2018 1:21PM
Add Your Comments
Latest Comments
Listed below are the latest comments about this post.
These comments are submitted anonymously by website visitors.
TITLE
AUTHOR
DATE
Anti-Trotsky is Anti-Marxist
Stop Stalin's Lies
Support Independent Media
We are 100% volunteer and depend on your participation to sustain our efforts!