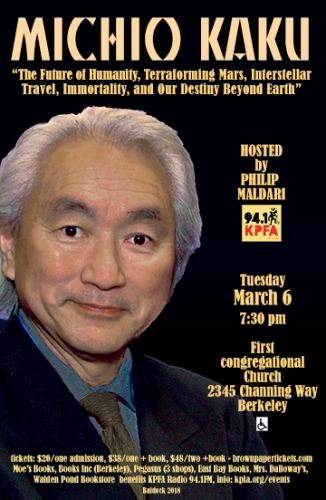 Import event into your personal calendar
Date:
Tuesday, March 06, 2018
Time:
7:30 PM - 9:30 PM
Event Type:
Speaker
Organizer/Author:
Bob Baldock
Location Details:
First Congregational Church of Berkeley, 2345 Channing Way, Berkeley
World-renowned physicist and futurist Michio Kaku explores in detail the process by which humanity may gradually move away from this planet and develop a sustainable civilization in space. He describes cutting-edge developments in robotics, nanotechnology, and biotechnology that could allow us to terraform and build habitable cities on Mars.

Due to climate change, the depletion of finite resources, or catastrophic cosmological events, humans may one day need to leave planet earth to survive as a species. Michio Kaku, professor of physics at CUNY, cofounder of String Field Theory, author of many books, is also the science correspondent for CBS and KPFA.
Added to the calendar on Sun, Feb 11, 2018 12:36PM
§Michio Kaku: The Future of Humanity: Terraforming Mars, Interstellar Travel, Immortality
by KPFA Radio 94.1 FM
First Congregational Church of Berkeley
2345 Channing Way
Berkeley, CA 94704

MICHIO KAKU
THE FUTURE OF HUMANITY: Terraforming Mars, Interstellar Travel, Immortality, And Our Destiny Beyond Earth
Hosted by Philip Maldari

In The Future of Humanity, Dr. Michio Kaku -#1 bestselling author of The Future of the Mind - traverses the frontiers of astrophysics, artificial intelligence, and technology to offer a stunning vision of man's future in space, from settling Mars to traveling to distant galaxies.

Formerly the domain of fiction, moving human civilization to the stars is increasingly becoming a scientific possibility- and a necessity. Whether in the near future due to climate change and the depletion of finite resources, or in the distant future due to catastrophic cosmological events, we all must face the reality that humans will one day need to leave planet Earth to survive as a species.

Kaku reveals how cutting-edge developments in robotics, nanotechnology, and biotechnology may allow us to terraform and build habitable cities on Mars. He then takes us beyond the solar system to nearby stars, which may soon be reached by nanoships traveling on laser beams at near the speed of light. Finally, he brings us beyond our galaxy, and even beyond our universe, to the possibility of immortality, showing us how humans may someday be able to leave our bodies entirely and laser-port to new havens in space.

MICHIO KAKU is a professor of physics at the City University of New York, cofounder of Strong field theory, and the author of several widely acclaimed science books. He is The science correspondent for CBS's This Morning, and host of the radio programs Science Fantastic and Explorations in Space, and a regular broadcaster on KPFA.

$20-$48.
END_OF_DOCUMENT_TOKEN_TO_BE_REPLACED
Add Your Comments
Support Independent Media
We are 100% volunteer and depend on your participation to sustain our efforts!