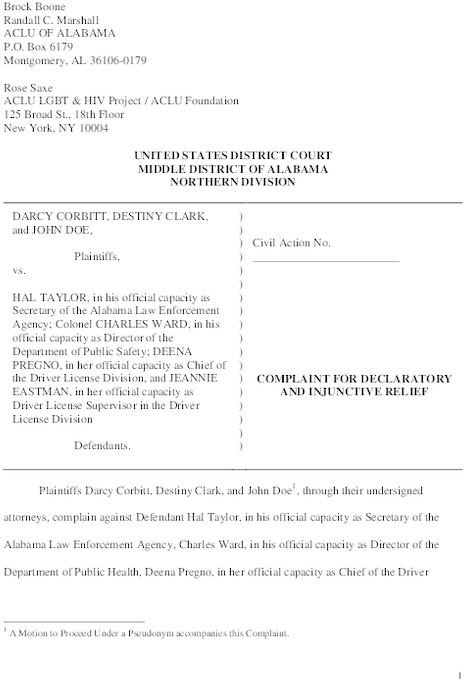 Download PDF (983.8KB)
“Transgender people — like all people — deserve to live their lives without the government compromising their privacy, safety, autonomy, dignity, or equality,” said Gabriel Arkles, senior staff attorney with the ACLU. “All people have a right to make their own healthcare decisions free from government coercion. They have a right to keep their personal information private. They have a right not to endorse a message from the government with which they disagree. They have the right not to be discriminated against by the government for who they are. And in addition to endangering transgender people, Alabama’s policy — and other policies like it — violate the law.”

Alabama is one of only nine states that explicitly requires surgery — or a court order that typically requires proof of surgery — before issuing transgender people an accurate driver’s license. That means most transgender Alabamans have no ID they can use safely. As a result, one plaintiff may be forced to leave Alabama and move out of state.

Another plaintiff, Darcy Corbitt, has had to contend with Alabama officials seeking out ever more invasive information about her medical and surgical history, at one point even calling her doctor’s office without her consent to get detailed records. And even with all that information, Alabama still refused to change the gender marker on her license.

“This clerk chose to publicly humiliate me by loudly discussing my gender identity, the most intimate part of my life, in a room full of strangers,” said Corbitt. “She insulted me and disrespected me, referring to me as ‘he’ and ‘him.’ She dehumanized me when she started calling me ‘it.’ I have not spent the last seven years of my life undoing 21 years other people defining my identity to just sit back and allow the state of Alabama to dictate to me who I am and what I have to do to prove it to them. I have not endured ridicule from friends, family, and complete strangers and death threats to simply ignore a civil servant whose wages my taxes pay belittling me and mocking me to my face and in front of my neighbors.”

Brock Boone, staff attorney with the ACLU of Alabama, said, “It is baffling that the Alabama Law Enforcement Agency requires surgery to change the gender on a driver's license when the federal government does not require surgery, and the American Association of Motor Vehicle Administrators instructs states not to require surgery. Surgery is not what all transgender people need, want, or can afford. The state does not have a right to determine which medical procedures a person has, nor can they force surgery on an entire class of people. But even when one of our clients had surgery, the state still refused to change the gender on our client’s license. This discrimination forces transgender Alabamians to out themselves every time someone sees their driver’s license, which puts them at increased risk for violence and harassment."


https://www.aclu.org/news/aclu-sues-alabama-discrimination-against-transgender-people
Add Your Comments
Support Independent Media
We are 100% volunteer and depend on your participation to sustain our efforts!