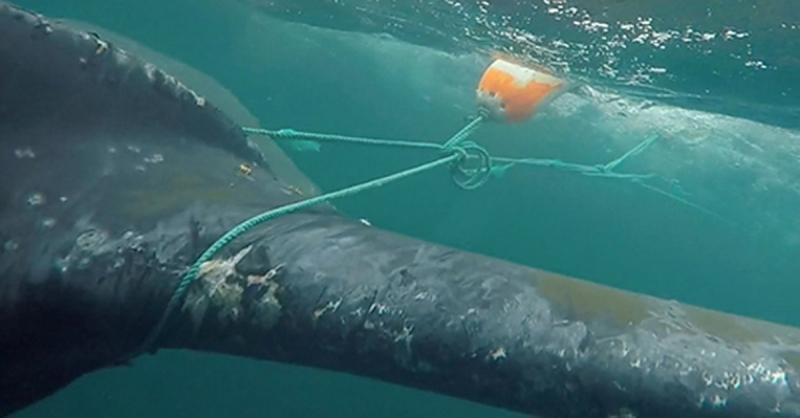 original image (1200x628)
SACRAMENTO, Calif., February 6, 2018 — The Center for Biological Diversity on Wednesday morning will present state wildlife officials with almost 11,000 letters urging them to better regulate the commercial Dungeness crab fishery to protect whales from being tangled up in fishing gear. The Center sued the California Department of Fish and Wildlife over the issue in October, following sharp increases in entanglement reports in recent years.

Center staff and supporters — including 11-year-old Rio Meyers-Dahlkamp, who became interested in the issue as part of a Bay Area grade school project — will address the Fish and Game Commission as it receives a report from the California Dungeness Crab Task Force, an advisory council that recommends changes to the fishery. The Center will then deliver the letters to Fish and Wildlife Director Charlton H. Bonham at the meeting or at the department office upstairs.

“Californians are sick of seeing whales killed and injured by crab lines. It’s time for officials to take action instead of ignoring the problem and hoping it will go away,” said Steve Jones, a Center spokesperson. “Crabs don’t need to come with a side of dead whale, but the department has to start actively managing this fishery.”

At least 19 humpback whales, two blue whales and one leatherback sea turtle — all protected by the Endangered Species Act — were found tangled up in commercial crab gear off the West Coast in 2016, the last year for which official federal data are available. Entanglements in ropes connected to heavy commercial Dungeness crab traps cause injuries and death as the ropes cut into the whales’ flesh, sap their strength and lead to drowning.

Each entanglement of a humpback whale, blue whale or leatherback sea turtle violates the federal Endangered Species Act. The state is liable for causing these unlawful entanglements because it authorizes and manages operation of the fishery.

Many entanglements are clustered around the biologically rich Monterey Bay, where migrating whales came to feed. The California commercial Dungeness crab-trap fishery entangles more endangered whales and sea turtles than any other U.S. West Coast fishery.

The Center’s lawsuit seeks common-sense reforms to the fishery, such as restricting the amount of gear in whale hot spots like Monterey Bay, or reducing the amount of rope running through the water.

When: Testimony during public forum at the California Fish and Game Commission meeting at 10 a.m., Feb. 7, followed by presentation of letters.

Where: Hearing in Auditorium, First Floor, 1416 Ninth Street, Sacramento. Letters will be presented at the hearing or after the public forum in the Department office on the 12th Floor.


http://www.biologicaldiversity.org/news/press_releases/2018/whale-entanglements-02-06-2018.php
Add Your Comments
Support Independent Media
We are 100% volunteer and depend on your participation to sustain our efforts!