The following video and report was sent to us [IGD] by antifascists in the Bay Area, who made quick work of an anti-immigrant banner put up by the neo-Nazi group, Identity Evropa. IE, and its revolving door of leaders, were central to the organizing of the murderous 'Unite the Right' rally in Charlottesville, and have been active in Northern California since 2016.

Bay Area Antifascists captured a banner that the white nationalist group Identity Evropa hung from the Yerba Buena Tunnel heading into San Francisco. As a strike towards the defeat of our enemies, we tore down the banner put up in the early hours of the morning which attempted to “warn” commuters of “dangerous immigrants and refugees” and spread hate and fear of immigrants who call San Francisco their home.

We refuse to settle between the terror of white fanatics like Dylan Roof, James Fields, and Jeremy Christian, or their ideologues like Identity Evropa. We will not accept the “sanctuary state” of Jerry Brown, nor continued ICE raids or Trump’s disastrous wall. We will take our collective liberation, and nothing less. Sanctuary is not given, it is carved out of everyone’s desire to be safe and free, and for that desire to be respected. Much like the banner removed and burned, we will take it upon ourselves to build a new world from the ashes of theirs.

There’s no sanctuary in the bay for “alt-right” white nationalists or fascists of any stripe.

No borders
No nations
Fuck deportations 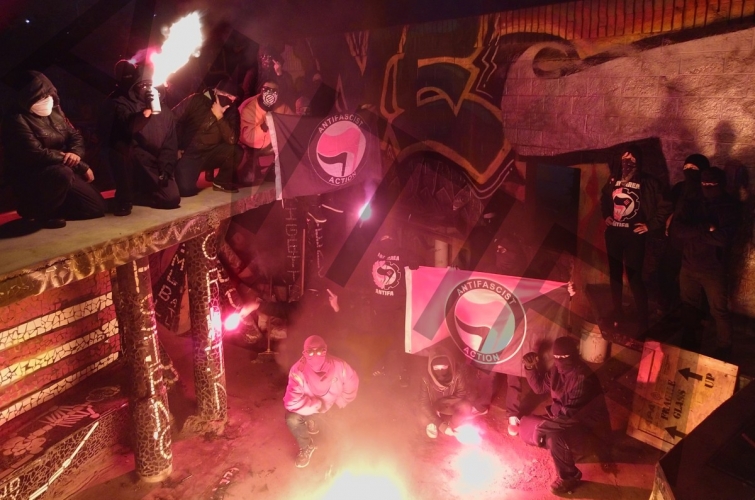 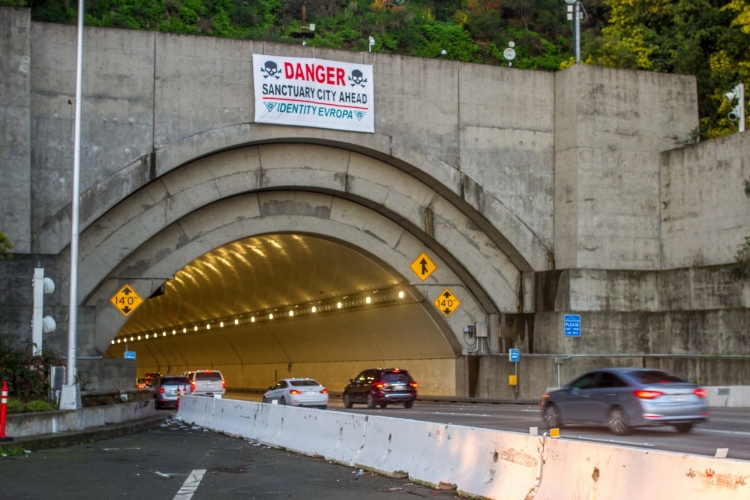 original image (2048x1365)
Cars that saw this were driving from one "sanctuary city" to another. Oakland considers itself a sanctuary city as well. As a state, California has made some moves to help protect immigrants. These jokers are the losing side of history.

Here's what the banner looked like before it was snatched by anti-fascists.
Add a Comment
Support Independent Media
We are 100% volunteer and depend on your participation to sustain our efforts!