Add an Event
Newswire
Calendar
Features
Home
Donate
From the Open-Publishing Calendar
From the Open-Publishing Newswire
Indybay Feature
Publish to Newswire
Add an Event
Related Categories: International | San Francisco | Global Justice & Anti-Capitalism
San Francisco Rallies for Afrin as Solidarity Demonstrations Spread
by It's Going Down
Thursday Feb 1st, 2018 4:36 PM
Audio report with interviews of demonstrators out on the streets of San Francisco during an Afrin support rally on January 26. 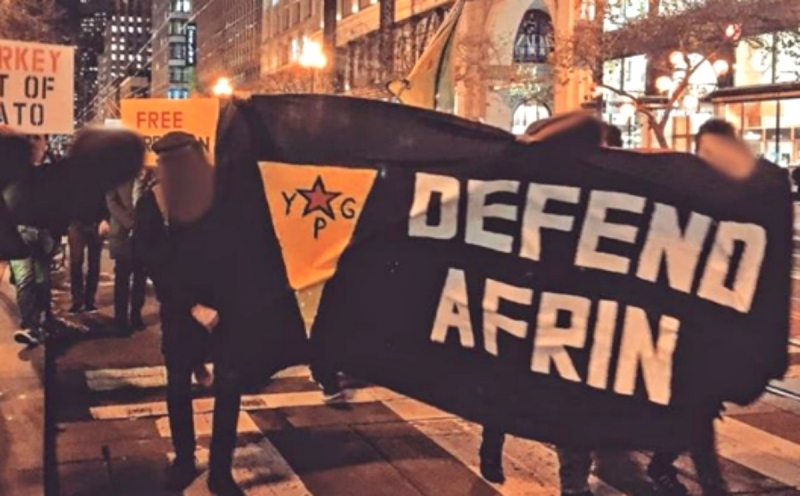 The following audio report comes from our friends at Broken Record Radio out of Santa Rosa, California and features several interviews with demonstrators out on the streets of San Francisco during an Afrin support rally. Those interviewed are part of the local Kurdish community and discussed how they see the unfolding situation in regards to the Turkish invasion of Rojava and the need to support the defensive forces on the ground.

In recent weeks, tens of thousands have taken to the streets of the world, holding demonstrations, occupying buildings, holding banners at sporting events, and taking militant actions in solidarity with the struggle in Rojava.

For more information on the struggle to defend Afrin, check out our roundup of solidarity actions. 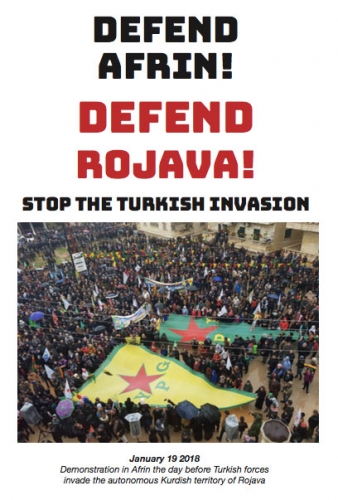 original image (408x603)
In 2012, from within the civil war of Syria, emerged Rojava.
Today, they need our solidarity to survive.

The Kurdish movement in Rojava, found in Northern Syria, took an opportunity to assert their autonomy and put into practice ideas of a free society based upon women’s liberation, ecology and a council-driven horizontally democratic system of local communes. Although the revolution was the assertion of a criminalized Kurdish identity, it was also a proposal for the rest of us tired of feeling powerless in the face of modern capitalist society and under the rule of nationalist states.

Shortly after Rojava declared it’s autonomy from the Syrian Regime it came under attack from the Islamic State. The volunteer based Kurdish People’s Protection Units, the YPG, and its all-woman counterpart the YPJ defended their revolution at all costs in epic battles epitomized by the fight to defend the city of Kobane. The Kurdish movement in Rojava has had to play a delicate game of uneasy alliances, negotiating air support and weapons from both the US and Russia while maintaining an uneasy stalemate with Syria’s Assad Regime.

The modern Turkish State was founded on the brutal assimilation of the diverse peoples within it’s borders. Those who resisted being assimilated into a contrived and mythical Turkishness were repressed at all costs, principally the Kurds enclosed within Turkey’s southeast borders with Syria, Iraq and Iran. For nearly 40 years the Kurdish movement in Turkey has been waging a struggle of existence through both an armed insurgency as well as by forming numerous political parties trying to have a voice within the Turkish parliament.

Turkey’s authoritarian president Recep Tayyip Erdogan, who fancies himself the next Sultan of the Middle-East, consolidated his power partially under the guise of being a peacemaker and resolving the Kurdish conflict. But he has turned out the be the most brutal Turkish leader yet. His government has trained Islamists in safe havens within Turkey before equipping them and sending them across the border to fight the Kurds. Erdogan conducted a war against his own Kurdish population 2 years ago committing massacres and destroying entire towns.

Last Friday, Turkey launched an operation into the western territory of Rojava called Afrin. It has used dozens of warplanes to attack YPG and YPJ positions as well as targeted villages where there are only civilians. Now that ISIS has been defeated in Syria, Russia and the US have left the Kurdish fighters on their own. An attack on Afrin, it’s people and it’s defense forces the YPG and YPJ is an attack on the political experiment taking place in Rojava. Don’t let this experiment fade into history, show your solidarity and support with the Kurdish fighters defending their autonomy.
https://mezosolidarity.net/2018/01/28/afrin/
Add Your Comments