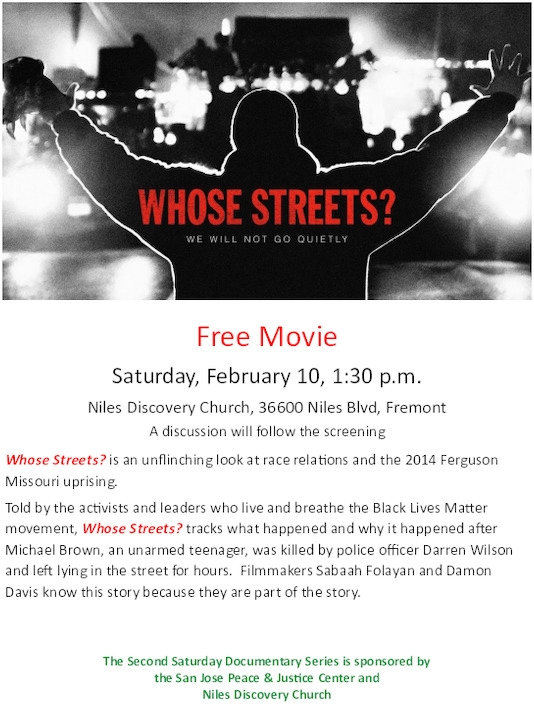 Whose Streets? is an unflinching look at race relations and the 2014 Ferguson Missouri uprising. The film will be shown February 10 at 1:30 pm as part of the Second Saturday Documentary Series at Niles Discovery Church, 36600 Niles Blvd., Fremont, at the corner of Nursery Ave. The screening is free and open to the public.

Told by the activists and leaders who live and breathe the Black Lives Matter movement for justice, Whose Streets? is an unflinching look at the Ferguson uprising. When unarmed teenager Michael Brown is killed by police officer Darren Wilson and left lying in the street for hours, it marks a breaking point for the residents of St. Louis, Missouri. Grief, long-standing racial tensions and renewed anger bring residents together to hold vigils and protest this latest tragedy. Empowered parents, artists, and teachers from around the country come together as freedom fighters.

As the national guard descends on Ferguson with military grade weaponry, these young community members become the torchbearers of a new resistance. Filmmakers Sabaah Folayan and Damon Davis know this story because they are part of the story.

There will be a moderated discussion after the screening.

The Second Saturday Documentary Series is co-sponsored by Niles Discovery Church and the San Jose Peace and Justice Center. Learn more about the series at http://bit.ly/ssds1802a.

END_OF_DOCUMENT_TOKEN_TO_BE_REPLACED
Added to the calendar on Mon, Jan 29, 2018 10:01AM
Add Your Comments
Support Independent Media
We are 100% volunteer and depend on your participation to sustain our efforts!